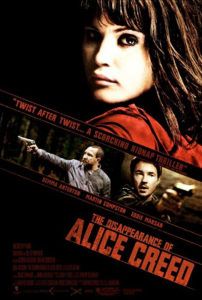 Two men make an apartment into a soundproof chamber. They secure padding to the walls and remove all unnecessary furniture. A bed is fastened to the structure so it won’t move. They attack a combination of several bolt and key locks to the doors. They steal a van and line the inside with plastic sheets. Then they dig a hole in the woods. When they get the girl, she’s gagged and bagged; they tie her to the bed, strip her, and take photographs. Afterward, they clothe her and make sure she has a pillow. A ransom message is sent with the photos, and then it’s just a matter of waiting for their plan to take hold. In only a couple days, if all goes as planned, they’ll have freedom in the form of two million in cash. But these things never go as planned, do they?

Doing exactly what it sets out to do, thrill us, The Disappearance of Alice Creed is a very smart film about a kidnapping. The British production has only three characters but the events therein are so involved, with enough twists and turns that the audience quickly forgets how limited the production could have been. Gemma Arterton plays Alice Creed, the kidnapping victim, and Martin Compston and Eddie Marsan play the kidnappers, Danny and Vic. The majority of the film takes place within the kidnapper’s makeshift lair, where Alice remains tied to the bed, forced to go to the bathroom while shackled. Meanwhile, the reluctant Danny contends with the rough temper of Vic. But in a way, this description has already said too much.

The sure hands of first-time feature filmmaker J Blakeson, who also wrote the script, direct the picture and makes even the first hour, when the material never leaves the confines of the padded apartment, visually dynamic. The audience is always certain of the space, the size of the rooms, and the claustrophobia of the situation. But the film’s lasting effect is Blakeson’s ability to make the story’s many twists believable but unpredictable. And despite there being a number of them, the twists never feel unnatural or forced, just progressions in the drama and developments in character. Each time one of them comes along, the audience doesn’t suspect, and the movie adds a level of complication. By the finale, we can’t help but be immersed in the plot and characters, as Blakeson has done such an expert job of submerging us under layers of clever secrets.

On the other hand, there are moments in Blakeson’s script that would not have worked without his splendid cast. American audiences will know Arterton from her appearances from two of 2010’s most disappointing blockbusters, Clash of the Titans and Prince of Persia: The Sands of Time. She also appeared in Quantum of Solace as the red-headed Bond girl, Strawberry Fields (a name almost as tasteless as Pussy Galore). There was nothing in those previous, empty performances that suggest she could fill the daring role of Alice Creed here. But sure enough, Arterton lays down some major emotions in her portrayal of the kidnapped woman, suggesting the actress has found her niche: she should be playing real characters instead of doll-like parts that are mere garnish to her leading men.

Indeed, the film’s entire cast delivers breakthrough performances. Compston and Marsan create a clever and dynamic relationship between their kidnapping pair. Compston’s experience amounts to forgettable bit roles in The Damned United and Doomsday. Marsan, however, has led an exceptional career in the backdrop of several great films: Vera Drake, The New World, and most recently an intense presence in Happy-Go-Lucky, playing the driving instructor who needs anger management. He’s often been “that guy” that audiences recognize but don’t really know. It’s time to learn. His name is Eddie Marsan, and he’s rather terrific.

Writing about The Disappearance of Alice Creed is a difficult task, because further than the first twenty-or-so minutes, the secrets begin to unfold, and those are best left discovered by a fresh audience. So while this review gives you no more an idea of what the film is about than the synopsis on the back of a DVD, there are times when a considerate review must simply be a statement saying “See this movie!” Even if it is a one-and-done experience that needs only be seen once, which this film is. Regardless, it’s superbly directed and incredibly acted—a surprising, intelligent thriller that moves fast and never ceases to have something unexpected around the corner. When crime pictures like this so often result in predictable dribble, how refreshing it is to find something that keeps you guessing and manages to have some dramatic weight.