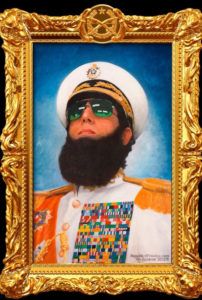 Sacha Baron Cohen’s latest in his long pageant of ironically ignorant characters is named Admiral Colonel Aladeen, the megalomaniacal idiot leader of the small, fictional North African country, the Republic of Wadiya. Born into wealth and power, he assumed supremacy at the age of 7 and that’s about where his intellectual development stopped. It takes no more than a mild offense to be executed under his rule, like the guy who had the misfortune to get the cereal box toy Aladeen wanted. His life is filled with excesses; just look at his elaborate golden-ornamented mansion, which is filled with taxidermied wild animals, gaudy portraits of himself, and no end of concubines. Moreover, Aladeen beds countless celebrities like Meagan Fox, Halle Berry, and Arnold Schwarzenegger, but he also just wants someone to love and cuddle. Now Aladeen wants to build weapons of mass destruction, and the world has gone on alert.

Comparable to Saddam Hussein in a movie dedicated to Kim Jong-il, Aladeen is the titular character in The Dictator, which reteams Cohen with his Borat (2006) and Brüno (2009) director Larry Charles. Written by Cohen’s usual band of screenwriters and pieced together in a loose assemblage of footage, this comedy proceeds with the thinnest of plotlines, fully dependent on Aladeen’s exaggerated political incorrectness to fill the gaps. After Aladeen announces his plans to begin a nuclear program, the United Nations demands he appear in New York to address their concerns. But Aladeen’s right-hand man, his cousin Tamir (Sir Ben Kinsley, picking up an easy paycheck), the rightful heir to the Wadiya throne, has other plans. Tamir wants Aladeen assassinated so the country’s oil assets can be sold to various international interests. And so, in a plot point reminiscent of The Devil’s Double, Tamir hires a Southern-Fried American contract killer (John C. Riley) to wipe out Aladeen, who will then be replaced with an even more simple-minded look-alike.

But Reilly’s killer succeeds only at removing Aladeen’s signature beard, making the leader look like any number of Middle Eastern immigrants on the streets of NYC. From this suddenly anonymous position, with no extravagances to fall back on, he must stop Tamir’s scheme and ensure his dictatorship stands. In the meantime, his larger-than-life personality conflicts with his status of a veritable bum. He finds a job at an all-immigrant populated health food store owned by Zoey (played by Anna Faris in another of her grating comedic roles), a stereotypical ultra-feminist liberal who accepts Aladeen into her store as a refugee of Wadiya. Acting under the made-up name Alison Burgers, Aladeen teams with his former rocket expert Nadal (Jason Mantzoukas) to reclaim his dictatorship, while he and Zoey form a romance that will convert this tyrant’s cold heart into one of tolerance.

This frustratingly dull story amounts to about half of the film’s screen time; the other half is spent running overused jokes into the ground. Laughs are few and far between, which comes as a surprise given how Borat and Brüno managed to be two of the most riotously funny movies you’ll ever see. Granted, their similar shock-based humor may only be effective the first time around, but that first time’s a doozy. What made those films so hilarious was not the story they told, but rather Cohen and Charles’ method of filming actual U.S. citizens interacting with Cohen’s outrageous characters. Guerilla filmmaking at its best, they capture American-brand racism, homophobia, anti-Semitism, and general bigotry at its worst, and in turn, make an intelligent socio-political commentary. Aside from a brief assemblage of scenes showing Aladeen running about Times Square in a panic, this movie remains reality-free and therefore falls into the realm of a run-of-the-mill comedy.

The modern equivalent to Charlie Chaplin’s The Great Dictator this is not. One or two scenes stand out, such as when Aladeen and Nadal take a NYC helicopter tour and discuss cars in their Wadiyan tongue. Occasional words out of context—such as “9-11-2012” and “Empire State Building”—lead their fellow passengers to assume these two “suspicious-looking” types are plotting a terrorist attack. Misunderstandings and wrongful arrests ensue. But Cohen’s usually subversive, politically-minded comedy fails to strike in the smart ways his previous films did. The movie’s majority is spent exploring potty humor, an extended birthing vagina gag, and endless sex jokes. In a way, such routine humor is almost redeemed during the climax, where Aladeen gives a speech that becomes the movie’s funniest moment: He argues how America would be better off as a dictatorship and outlines the qualities of Wadiya’s totalitarian government, except each point he makes describes a characteristic of our country today. It’s a hilarious jab at America, which is what Cohen does best.

Sadly, few moments in the movie are as pitch-perfect as this one, and others like it seem to have been looped in during post-production. In the movie’s trailer, during Aladeen’s reception parade, he says, “Ah, America! Birthplace of AIDS.” In the finished film, the shot pulls back so Cohen’s mouth cannot be read; now the line is, “built by the Blacks, owned by the Chinese.” Cohen and Charles’ wobbly structure worked when their film was an amalgamation of real footage and staged, but here almost everything’s staged. Reaction shots, the funniest element of their earlier films together, are performed by actors instead of real people. As a result, the story drags along, uninteresting and predictable, with few surprises to speak of. Even with a brief 75-minute runtime (and about ten minutes of end credits scenes), the movie feels drawn out. Not as infantile and stupid as Cohen’s first post-Da Ali G Show movie, Ali G Indahouse (2002), The Dictator feels like an unfortunate step backward for Cohen, both as a comic and a satirist.