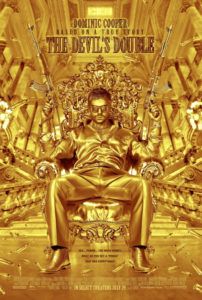 Saddam Hussein’s son Uday, a murderer, rapist, and torture-hungry psychopath fuelled by endless parties, drugs, guns, and all the excess that his family’s considerable fortune could buy, was loathed even more than his father. During Iraq’s war with Iran in the late 1980s, Uday gave army lieutenant Latif Yahia, a former schoolyard chum with a striking resemblance, an ultimatum: Serve as my double or I will kill your entire family. With no choice, Latif agrees and undergoes facial plastic surgery, learns to mimic Uday’s high-pitched speech, and receives a mouthpiece to create Uday’s overbite, enhancing the likeness enough to be deemed Saddam’s “third son”. After daddy dictator approves, Latif becomes one of Uday’s entourage, forced to endure witnessing one atrocity after another.

In The Devil’s Double, director Lee Tamahori (The Edge) and screenwriter Michael Thomas (Ladyhawke) take us into a world somewhere between Caligula’s palace and the over-decorated mansion of Al Pacino’s Scarface. Based on Yahia’s autobiographical books on the subject, the story is surprisingly light on political commentary or even political scenery of the era, although it features an astounding dual performance by Dominic Cooper as both Uday and Latif. The film might seem sensationalized given the double gimmick, but even Saddam himself was known to have doubles in his employ. Moreover, Uday was a widely known madman. He would drive around in sports cars, spot underage school girls, chase them down and rape them, only to have their bodies dumped somewhere. He enjoyed an endless string of prostitutes, watched torture videos made for him by the Iraqi army, and crashed weddings so he could defile the bride. He was a monster.

As we watch all this, it feels like the spectacle of debauchery never ends, and the modest human elements sometimes have difficulty achieving a greater impact than Uday’s depraved behavior. Latif receives training on Uday’s life by a wise adviser, Munem (Raad Rawi), who’s described as a good man in a bad job. Their exchanges offer a brief respite from the insanity, as does Latif’s affair with Uday’s top whore, Sarrab (Ludivine Sagnier), a seemingly victimized hooker-with-a-heart-of-gold. The relationship proceeds on a purely physical level of attraction, and so any deeper connection feels obligated by the story’s need for a romantic element. Thomas’ script doesn’t penetrate Latif’s cold but disapproving exterior, although it doesn’t have to; Tamahori makes this a story of good vs. evil and doesn’t bother exploring the psychological gray area. It’s just a matter of how long Latif will suffer Uday’s ghastly behavior until he rebels.

Capturing both characters with distinct nuances and mannerisms, Cooper deserves praise for his dual roles, arguably the best “twin” performance since Jeremy Irons in Dead Ringers. At once, Cooper realizes an over-the-top Pacino-esque fanatic whose drives are not only base, but undeniably crazy, and another character whose disgust eats away at him until he can take it no more. Only for a moment when the characters first face each other onscreen does the audience see two Coopers; for the remainder, their distinction is absolute, as Cooper disappears into the two roles. Though he’s delivered some impressive supporting performances in An Education and Tamara Drewe, Cooper has never achieved anything on this scale. And if it weren’t for the film’s limited distribution (it debuted at Sundance in January 2011 and then received a minor theatrical release later that July) he might be a definite hopeful during the awards season.

In terms of historical accuracy or even relevancy, The Devil’s Double raises some questions after viewing. The story depicts Latif as a noble hero, but history shows that Latif was, in fact, being groomed as Uday’s double since their schoolyard days together. It’s an easier, less complicated story to tell if Yahia’s book or Tamahori’s film paints the hero as Uday’s victim. But what does that say about the film’s rather superficial motives? Tamahori, an action director with entries in the James Bond and xXx franchises, no doubt found this a less confronting approach more attuned to his usual brand of movie. To be sure, Tamahori delivers the sensory stimuli in abundance, with violence and heated arguments and Cooper’s incredible performance filling the screen. Though it’s not a very insightful or illuminating experience, it’s a visceral one that can’t help but hold your attention to the spectacle on display.