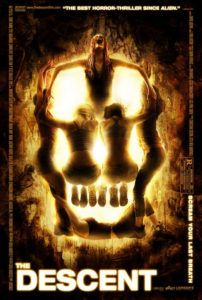 Creepy things in the dark. The Descent is about that and little more. Writer-director Neil Marshall may spend the first half of his gruesome horror film avoiding monster-based scares altogether, but it’s only to strum our nerves for his frightening second half, which enters dreadfully nasty territory. Tacked onto the monster movie setup is a melodramatic subplot thin enough to deceive some into believing there might be a narrative at work. Alas, there is not. Blood-curdling gore is the order of the day, albeit well shot and wonderfully staged. In a way, it’s easy to despise a movie like this. No story exists. Characters remain one-note, just sympathetic enough for us to prefer they wouldn’t die. The directorial choices are mostly derivations of better filmmakers. And yet, this soupy splatterfest is apt to make you gasp, squirm, and cover your eyes in terror. Tension wraps around you until you’re blue from holding your breath, and you release only to scream. It’s just that effective.

The story follows a group of women spelunkers headed to the North Carolina Appalachians. In the prologue, we learn Sarah (Shauna Macdonald), Juno (Natalie Mendoza), and their friends are minor daredevils, white water rafting and such for a thrill. It’s suggested that Juno has been sleeping with Sarah’s husband, but before that can be addressed, he and Sarah’s child die in an abrupt car accident. There are no men in the picture—since Sarah’s husband is so quickly disposed of—leaving all the action to these likable women, each the beer guzzling, foul-mouthed sort. The group of friends meets some time after the crash, hoping to revive Sarah’s spirits by visiting a local tourist cave.

The movie progresses without much need for background, however, as it’s a survivalist tale. Without telling the others, Juno leads them into an unexplored cavern, something not on the guidebook. Before you know it, they’re stuck, and the only way out is through. The tension goes from 0 to 100 in a matter of seconds. Supplies are limited. Underground cave systems go on for miles, and uncharted terrain could be wrought with obstacles they’re unprepared for. Tight squeezes through tunnels, a broken (protruding) bone for one, and possible paranoia-induced hallucinations advance the viewer’s anxiety. Shot with clever minimalism, Marshall employs several visual signatures that should be noted. He keeps the dark interesting by lighting red flares, cracking green glow sticks, and utilizing the night vision option on his characters’ digital camera. In some scenes, all is black except a small section of the screen. These features are used to keep us feeling claustrophobic, to keep us guessing about what lies beyond the abyss. Well, you remember what Nietzsche said about staring into the abyss, don’t you?

As if the fear of dying several miles underground where no one will ever find you wasn’t enough, Sarah sees something: humanoid, albino, bat-like creatures with sonar vision, horrible screeches, and a hunger for anything that enters their lair. No one believes her at first, but then the things attack. Our heroes (Or should they be called victims?) get torn to bits trying to endure. Of course, this is just the place for Sarah to emerge from her post-trauma depression. If only we all had literal monsters to kill when working to eliminate our emotional ones.

Marshall does what John Carpenter did for his masterpiece The Thing; by combining psychological and literal fear tactics, the director jolts the audience in as many ways as possible. When we’re not hyperventilating from the confining darkness, we’re petrified by what’s hiding in there. And though Marshall’s pilferage from Carpenter’s material comes to an ugly head in his next film, 2008’s Doomsday, here the subject and execution are superior enough to ignore his imitative style. Where The Descent succeeds is taking us deeper and deeper into a terrifying situation, no matter how silly the concept sounds when you recommend “this really scary movie about bat-people” to your friends. To be sure, Marshall hasn’t made a great film, just a very good B-movie. There’s evidence of his low budget, like sloppily computer-generated bats and a ludicrous explanation for how the bat-creatures evolved. But logic can’t compare to the tense, jumpy, nail-biting results that linger long past the end credits.