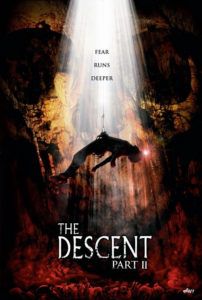 For fans of spelunking horror—that is, horror movies set inside the confines of a dark and damp cave system—the options are few. The masterpiece (a term used liberally in this case) of this sub-subgenre is Neil Marshall’s claustrophobic chiller, The Descent. Filled with slightly developed characters, creepy sounds, confined spaces, lots of black filling the frame, and eventually some nasty human-bat monster thingies, the blood-curdling result was a surprising pleasure imported stateside from England in 2006. The sequel, simply titled The Descent: Part 2, opened in the UK in 2009 and makes its debut in the states on home video. And despite its regression into full-fledged schlock mode, this horror sequel didn’t deserve the direct-to-video treatment.

The sequel picks up exactly where its predecessor left off. The majority of the all-girl crew of thrill-seeking cave explorers is dead, having entered an uncharted cave system in the Appalachian Mountains only to find themselves lunch for de-evolved human bat-thingies. The lone survivor, Sarah (Shauna Macdonald), is found covered in blood and traumatized with memory loss. The crusty local sheriff, Vaines (Gavan O’Herlihy), wants her to retrace her steps to not only remember what happened, but to find the other women in her party. Accompanied by cave jumping guides (Anna Skellern and Douglas Hodge) and another officer (Krysten Cummings), Sarah leads Vaines down into the abyss of unexplored caves.

Of course, the moment Sarah remembers what happened to her friends is the precise instant when bat-thingies pop out screeching and drooling, hungry for human meat. As panic ensues, the unprepared rescue party gets lost and separated in the dark, and one by one they’re picked off by way of increasingly gruesome deaths. Sarah, meanwhile, goes stealth to sneak her way out and discovers a few surprises along the way. One character finds herself enclosed with nowhere to move after a tunnel caves in; around her, bat-thingies scurry and sniff, with only a boulder or two protecting her from them. But this sequel is less about claustrophobic spaces than its predecessor. In place of empty nothingness, the caves are somehow well lit, if only so audiences can see the profuse displays of excessive gore and squirting blood.

As we follow the characters through the cave system, it becomes evident that director Jon Harris has gone to considerable lengths to represent the same space of the original—to the extent that the fresh corpses of victims from the first movie still litter the cave. Harris doesn’t, however, use spelunking light devices like flares and glow sticks to determine his movie’s color palate, which is a mistake—that visual effect was so dynamic in the original.

The trio of writers (J. Blakeson, James McCarthy, James Watkins) show respect for Marshall’s foundation with these continuity nods, but they squander the setup by offering nothing new in terms of plot. The bat-thingies attack the humans, the humans seek escape, and that’s about it. Even the finales are identical. What this sequel doesn’t have are answers. Where did these bat-thingies come from? It was implied in the first film that cavemen were trapped underground long ago and simply evolved differently, into blind, sonar-driven eaters of flesh. But we learn little more about them through the course of the movie, except for a nauseating look into their toilet habits.

Grievances aside, The Descent: Part 2 deserved better than home video for its U.S. debut, as evident in the quality production value and competent but unimaginative direction. Surely a wide distribution into theaters could have earned this meagerly budgeted gorefest a reasonable profit, given the proper advertising. But who can blame Lionsgate, the video distributors? Being the kind of movie that works best at home, where viewers can hoot and holler at the sillier, more disgusting moments, it’s hard to imagine the movie offering a theater experience that doesn’t end in disappointment. It’s that we never had the option of enjoying this brand of bat-thingy schlock in the theater that’s most disappointing.