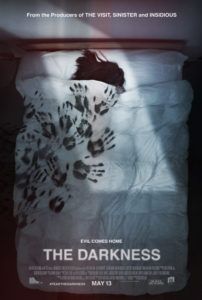 When members of your family start behaving like they’re clichés in a television soap opera, check around; one of them may have brought haunted Anasazi spirit stones home from your recent trip to the Grand Canyon. If that’s the case, then prepare yourself for overwrought domestic behavior, as well as some boilerplate supernatural events around the house. This is precisely what happens to the characters in The Darkness, another dull spooker from Blumhouse Productions, producers of the Paranormal Activity, Insidious, and Sinister franchises. However, it’s doubtful Jason Blum’s production company will develop a sequel, as the movie proves ineffective and uninteresting, making those other franchises look as accomplished as the original Poltergeist by comparison.

Australian co-writer and director Greg McLean incorporates an absurd amount of suburban turmoil into the lives of his central family, the Taylors. The character-heavy treatment feels strange for McLean—certainly far removed from the gristly and schlocky hard-R horror of his earlier efforts on Wolf Creek (2005) and Rogue (2007). The always-reliable Kevin Bacon headlines as Peter Taylor, a successful architect with a string of extramarital affairs behind him. Peter’s wife Joy, played by genre favorite Radha Mitchell, struggles with alcoholism. Their teenage daughter (Lucy Fry) suffers from bulimia, morbidly leaving containers of her purged meals in sealed containers under her bed. Their autistic young son Mikey (David Mazouz) seems to be getting worse instead of better. If the Taylors had a pet, no doubt it would be an incontinent, three-legged cat.

This family could be called a nightmare even if Mikey hadn’t brought home haunted Anasazi stones from their recent vacation. Turns out the trapped Anasazi spirits, or maybe they’re demons, want out of the spirit realm, and for some reason tormenting the Taylors will allow them to escape. Each spirit is represented by a different animal (crow, coyote, wolf, bison, and snake), and so these animals appear out of nowhere. Faucets turn on without warning. Joy feels vulnerable in a tub (where women are always vulnerable, thanks to Hollywood). Black hand prints are left on bedding and walls. And Meanwhile, the only person able to see the spirits is Mikey, who puzzlingly calls them “Jenny”. Which of the ancient Anasazi spirit animals goes by the name of Jenny, you ask? Your guess is as good as mine, as this plot detail is never explained.

Fortunately, Peter’s otherwise crude boss (Paul Reiser) recommends they talk to his wife Wendy (Ming-Na Wen), because she has the contact information for your standard Mexican-American psychic medium. (NOTE: Why, after three attempts to get the contact information from Peter’s boss, does he require them to speak with Wendy? Can’t he just speak with his wife and pass it along?) In the final scenes, the psychic medium and her assistant (Alma Martinez and Ilza Rosario) attempt to clear the “evil house”, resulting in plenty of CGI smoke and ghoulies in silly costumes. It’s all wrapped up without much consequence or involvement, making you realize those are 92 minutes you’re never going to get back.

McLean wrote alongside Shayne Armstrong and S.P. Krause, incorporating Hollywood’s obsession with the real-life ancient Anasazi Puebloans and their mythical disappearance from the face of the planet centuries ago. Although many believe the Anasazi tribes simply migrated to the southwest, everything from various episodes of The X-Files to silly sci-fi like Phantoms (1998) have used their apparent vanishing to explore extraterrestrial or supernatural gimmicks. The Darkness is more interested in the crumbling family dynamic at the movie’s center. Normally, I would praise a horror movie for being so character-centric; however, when the characters feel like examples used in a Screenwriting 101 course, it’s difficult to feel engaged.

The Darkness is the kind of horror movie in which every scene and every character has been derived from other material and applied here without the slightest bit of ingenuity. It’s functional, I suppose, in that McLean’s behind-the-scenes crew at least doesn’t construct a technical mess. But the degree of tedium onscreen becomes unbearably boring early on and never wanes. The sole element holding the events together are recognizable and talented actors like Bacon, Mitchell, Reiser, and Wen, as well as early appearances by Matt Walsh and Jennifer Morrison. Even supernatural horror enthusiasts won’t find much to cling to here. Granted, McLean tried something different by exploring the inner woes of an average suburban family, but his blueprint seems to be the worst kind of melodramatic corniness.