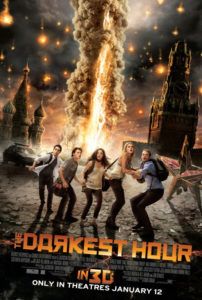 The Darkest Hour doesn’t earn as many points as it should have for setting its alien invasion scenario in Russia, striking though shots of an abandoned Red Square may be. The backdrop is merely eye candy for a familiar story that finds American tourists racing about Moscow trying to survive an apocalypse from the sky. The premise alone may interest genre fans: invisible energy beings drop down from space and launch an attack, turning billions into bursts of ash with a single touch, all to suck our planet dry of electrically conductive natural resources. Some viewers will notice that the plot recalls both Attack the Block and 28 Days Later in a number of ways; however, the underdeveloped survivors have almost no personalities and make the familiar proceedings duller than they need to be.

Hoping to launch a new website with some Russian investors, two software designers Sean and Ben (Emile Hirsch and Max Minghella) fly half-way across the planet only to find themselves undercut by a Swedish competitor (Joel Kinnaman). They resolve to party their woes away that night in Moscow and find two American girls, Natalie and Anne (Olivia Thirlby and Rachael Taylor), to join them. These five wind up together when shimmering clouds of light gently fall from the sky and then disappear on the ground. Crowds gather only to witness the lights reveal themselves as unseen creatures that kill everyone in sight, vaporizing them without mercy. Director Chris Gorak, whose imaginative approach to his paranoid terrorist thriller Right at Your Door doesn’t carry over here, shows us how the aliens see with lame CGI “alien vision” shots that look outdated by about fifteen years.

Our five survivors hole-up in a storage room for days, which would seem like a prime opportunity for character development (reminiscent of every “trapped in the elevator” episode of every TV show you’ve ever seen). But Gorak and screenwriter Jon Spaihts skip over these many days of potential bonding to keep the momentum going. What a missed opportunity. When they emerge, the characters have no added closeness for their experience, as if their days confined together were only minutes. The male characters don’t even have added scruff on their chin. As they look for other survivors, the youngsters construe that their foes can’t see through glass, but more importantly, that the aliens are made of electricity. Electrical devices flicker on when the aliens are nearby, and so they begin tossing dead cell phones and light bulbs ahead of them as warning signs of an alien in close proximity. Consequently, they travel at night, allowing the sudden glow of dormant cars and street lamps to guide their way.

Among these plot absurdities, one or two visual flourishes prove interesting. The survivors eventually come upon an eccentric electrician (Dato Bakhtadze) who has built his apartment into a neat-looking Faraday cage—an enclosure that blocks all electrical fields, including electrified aliens, from entering. (Of course, the aliens find a way in regardless.) He’s also assembled a microwave gun (which looks suspiciously like a proton-pack from Ghostbusters) to zap away the bad guys. Unfortunately, when zapped, the aliens’ invisible shrouds are destroyed, revealing unintelligible tendril-things that look like they were salvaged from a videogame’s cutting room floor. Worse, because the survivors must travel at night, and because the film is presented in 3D, the viewer spends most of the movie trying to figure out what it is we’re watching. The already dark presentation is made wholly undecipherable with damnable 3D glasses dimming everything onscreen.

After the second or third time Hirsch’s average-intellect software geek makes an incredible, crucial discovery in electrical engineering to help the survivors’ cause, The Darkest Hour moves from tolerable to mildly unwatchable. The production has none of the breakneck energy producer Timur Bekmambetov, who is still riding the creativity behind Night Watch and Day Watch, usually infuses into his projects. And the 3D implementation makes any mild entertainment value difficult to find (it always helps when you can make out what’s happening), even for fans of space invader flicks. All of the poor 3D, lousy CGI, and run-of-the-mill plotting could be forgiven if there were some interesting characters onscreen, but there are none. (Note: Hirsch fired his representation after his flop Speed Racer, a visually dazzling film that just didn’t click with U.S. audiences. After this dud, will his replacement agent be looking for a job?)