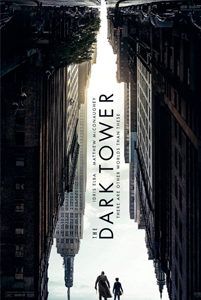 Stephen King wrote The Dark Tower series over eight novels and more than a million words, and it took him 30 years to complete. The first novel, The Gunslinger, was published in 1982, and the final entry arrived in 2012. A meta-multiverse both self-referential (he wrote himself into the story) and bearing connections to other King novels, the material involves an ever-expanding world ideal for Hollywood’s current obsession with universe-building intellectual properties. Long in development at various studios with talents like J.J. Abrams and Ron Howard hoping to adapt the material into multiple films or even a television miniseries, The Dark Tower eventually landed at Sony under chief Tom Rothman, who put Danish director Nikolaj Arcel (A Royal Affair, from 2012) at the helm. And given the reported behind-the-scenes woes—poor test screenings, multiple re-edits, and some question as to Arcel’s ability to control the $66 million production—the resulting 95-minute feature seems lackluster and ordinary for King’s entrenched mythology, not to mention conspicuously self-contained for a film with such franchise potential.

The film does not draw from a particular novel in the series; instead, its screenplay (attributed to four writers: Arcel, Akiva Goldsman, Jeff Pinkner, Anders Thomas Jensen) pares down the material into a kind of fan fiction, with the usual structural influences of Arthurian, Lovecraftian, and Tolkien-inspired mythology embedded into King’s setting. In the desolate Mid-World, Roland (Idris Elba), the last of the legendary gunslingers, seeks vengeance on King’s ultimate antagonist, The Man in Black (Matthew McConaughey), for killing his father. Roland wanders Mid-World trying to find his elusive enemy. Meanwhile, The Man in Black kidnaps children in an attempt to bring down the Dark Tower, a structure connecting various universes that, if destroyed, would mean the end of everything. Of course, only “the mind of a child” can destroy the Tower. One such child is Jake Chambers (Tom Taylor), a New York teen with psychic abilities called “the shine,” which King aficionados will remember from The Shining. Several references to other King novels (including It, Cujo, Christine, Misery, and many others) appear throughout, though they have little more than Easter Egg consequence to the plot.

A troubled boy with an absent father, Jake dreams of both The Man in Black’s dastardly plan and the heroic Roland, serving as the viewer’s entry point into the film’s under-explained background. But Jake’s rare ability has been spotted, and he’s pursued by The Man in Black’s goons: rat-faced henchmen hiding behind human skin masks (Fran Kranz, Abbey Lee, Jackie Earle Haley among them). Why does The Man in Black work with rat people? Who knows. Jake, using his dreams as a guide, escapes through a science-fictiony portal into Mid-World and, quite conveniently, teams with Roland. Together, they face monsters in the dark and sword-wielding bad guys sent by their enemy, leading to a CGI-heavy showdown in modern day New York. Elba and McConaughey’s characters engage in a face-to-face shootout, the hero shooting from his Excalibur-forged gun, the villain responding by moving shards of glass, nondescript debris, and large pipes with hand gestures. It’s one of the sillier climaxes in recent memory.

Vague scenes early on allude to the reasons Roland wants revenge, but the film provides no details within the overarching mythology. Roland and his nemesis serve as opposites in an eternal struggle whose backstory has not been adequately established, and therefore feels hollow. Even so, Elba has been perfectly cast, at least in concept. He just has little to do, forcing this critic to consider why an actor of his talent cannot secure better roles in Hollywood. Elba must suffer the indignity of cringe-worthy fish-out-of-water scenes meant for laughs, where Roland explores New York with Jake and discovers soda and hot dogs (“What breed?” he asks). Jensen delivers a strong performance, particularly in a scene when he sees The Man in Black’s cruelty. McConaughey, however, is another matter. His already hammy role is amplified by the actor’s dyed pitch-black hair, which alternates between being slicked back or spiked to look like raven feathers (whatever the production’s hairdresser felt like doing on that particular day, apparently). And it doesn’t help that McConaughey adopts all the subtlety of Norma Desmond, complete with grand gestures and speeches, usually appearing in Roland’s mind.

Unlike many franchise-establishing films released today, the brief runtime limits the film’s ability to feel epic or like much of a journey. Then again, the length isn’t the problem. Arcel and his cinematographer Rasmus Videbæk shoot the story with none of the grandiosity or style it deserves. Despite the massive scope and archetypal ideas driving the narrative—good vs evil, parallel worlds, the destruction of all things everywhere—the visual treatment seems grounded and straightforward, even annoyingly capable, but also entirely dismissable. King’s blend of fantasy, post-apocalyptic imagery, and Western iconography could have made an expansive and substantive cinematic world. But it seems as though the filmmakers shy away from everything that made King’s series distinct, memorable, and weird. Given its safe and unambitious translation to the screen, The Dark Tower amounts to another in a long line of disappointing King adaptations, which shouldn’t really come as a surprise to those who have followed the author’s poor book-to-film record.