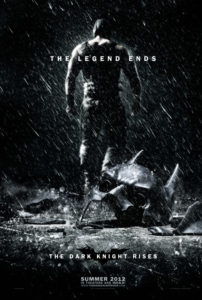 Christopher Nolan’s final act in his trilogy of Batman films once again proves the director an uncommon artist disguised as a commercial filmmaker. Compare The Dark Knight Rises and its predecessors to any of Marvel’s best superhero blockbusters—from The Avengers to Iron Man to Spider-Man 2—and no matter how entertaining they may be individually, in contrast they seem like child’s play. Cartoony and filled with more ambition to amuse than enthrall, Marvel’s series of comic book films feel somehow silly by association. Despite the rousing success and enthusiastic reception if this summer’s top-tier popcorn-munching joyride The Avengers, Nolan’s last chapter overtakes the bombastic fun of that film by injecting uncommon humanity and soul-searching gravity into the superhero genre. And with this final entry in the now-labeled ‘Dark Knight Trilogy’, Nolan has accomplished not only a singular motion picture epic, but the last in a self-contained series that demands a place alongside the artistic consistency of Peter Jackson’s The Lord of the Rings films or the first three Indiana Jones adventures.

The film opens eight years after The Dark Knight, at the end of which Batman took the rap for killing Gotham City’s savior Harvey “Two-Face” Dent (Aaron Eckhart). With Dent’s laundry list of criminal convictions remanded behind bars without possibility of parole thanks to an established “Dent Act”, the city grows complacent in peacetime. But that peace is contingent on a carefully structured lie. And so, without the need for a masked vigilante protector, Gotham’s Caped Crusader has long since made an appearance. Even Bruce Wayne (Christian Bale) has become a recluse, soured over the loss of his love Rachel Dawes. Gaunt and something like Howard Hughes in reputation, no one has seen or heard from Wayne in years, save for his loyal butler, Alfred (Michael Caine). Even Alfred has his limits, though. Watching his Master Wayne languish, unneeded by the city that gave him a reason to endure after the tragic loss of his parents, proves heartbreaking, as Alfred always hoped Bruce would find a way to move on. But forgetting about the past is not something we know to be in Bruce Wayne’s character.

Then again, the script (co-written by the director and his brother Jonathan, from a story by Batman Begins co-writer David S. Goyer) has more than a few surprises up its sleeve, not the least of which are character turns and surprising human developments. Not until the city needs him does Bruce Wayne snap back into action, and the arrival of uncompromising terrorist leader Bane (Tom Hardy) provides that need. Believed to be an excommunicated member of The League of Shadows, Bane’s much-rumored origins supply an ongoing mystery in The Dark Knight Rises, and his slow-burning plan to occupy Gotham City builds to shocking scenes of citywide destruction that hauntingly evoke 9/11 imagery. In time, he cuts off the city from the outside world and puts it to Gotham’s citizens to “take control”, all the while orchestrating a plot to fulfill the ultimate aim of The League of Shadows’ fallen head, Ra’s Al Ghul (Liam Neeson). Of course, Gotham’s control is a deception, masterminded by a villain as unrelenting as he is intelligent. The ingenious levels to Bane’s scheme are matched by his sheer physical power. When Batman first faces off with this buff brute, whose tubular metal mask holds back a rush of pain, it’s a one-way beating that ends with an unmasked Wayne sent to rot in the same Asian prison pit from which Bane was born.

But from this punishing conflict resides the film’s most profound emotional core, as Alfred cannot sit by and watch Batman commit virtual suicide by going against Bane. Eight years of idleness after his punishing stint as Batman has left Bruce Wayne frail and weak, and certainly not at the prime needed to defeat Bane. Ushering in the second act, Alfred leaves in a teary goodbye; although a loyal servant, he’s someone who loves Bruce Wayne and cannot watch him destroy himself against a superior force, no matter how noble the cause. It is choices like Alfred’s that make Nolan’s Batman films emotionally engaging, since his story doesn’t rely on comic book notions of unquestionable sidekick loyalty. Nolan’s Bat-universe is rooted more in the realistic than the fantastic, in large part because of how its characters behave. And as much as Bruce Wayne concerns himself with saving Gotham City from destroying itself or being destroyed by Bane, Nolan hasn’t forgotten to place our involvement not only with the fate of Gotham, but the emotional state of the film’s protagonist.

As such, there are two love interests in The Dark Knight Rises: Marion Cotillard plays the philanthropist Miranda Tate, who everyone from Alfred to Lucius Fox (Morgan Freeman) seems to think would make Wayne a fine companion. She’s a Wayne Enterprises board member with a unique connection to the film’s central MacGuffin: a clean-energy fusion reactor Bane transforms into a nuclear time-bomb. Miranda seems to be Wayne’s distant hope of a normal life, especially after some long overdue lovemaking. More immediate, Batman has his own female counterpart in Selina Kyle, a.k.a Catwoman (Anne Hathaway), a seductive survivalist cat burglar playing both sides to her own advantage—to escape her long record of past crimes and start over history-free. How appropriate, as Bruce Wayne and Batman also have their respective tragic pasts to forget. Similarly saddled with his eight-year deception is Commissioner Jim Gordon (Gary Oldman), who has placated Gotham’s unrest by hiding the truth behind Dent’s murderous mutation via The Joker into Two-Face. He’s called out on his morally questionable decision by straight-arrow rookie cop John Blake (Joseph Gordon-Levitt), one of many characters in this film to uncover Batman’s alter-ego.

With Bruce Wayne dropped into a pit, where he must once again find his spiritual center before he can return to Gotham as Batman, Bane is left to unleash hell. From Bane’s attacks on the Gotham City Stock Exchange to the socio-political allusions to modern-day America, The Dark Knight Rises taps into our greatest fears as a society: terrorism and economic recession.  Here is where Nolan’s filmic vision becomes grand and grim, stripping down any progress the illusion of peace built by Harvey Dent’s false heroic example. Nolan shows us a city torn apart by rabid crowds, undone by fear, and subject to maniacal courtroom sentencing (performed by a familiar face). If in Batman Begins the teeming Narrows threatened to pollute greater Gotham, and The Joker’s fear campaign sent a city into panic in The Dark Knight, then Bane exacts all-out war, and in doing so eclipses those earlier conflicts, complete with a small army of heavily armed goons that are too much for one hero. Once again, Gotham hangs in the balance only to step up and take action, but under Bane’s watch it crumbles to a degree the average moviegoer wouldn’t expect from a superhero movie. (No wonder the brothers Nolan reference Charles Dickens’ A Tale of Two Cities so often, both directly and indirectly, in their script.) The easiest mistake to make with any of Nolan’s Batman films is that you’re watching “just a movie”; rather, here are operatic tales with sweeping stakes, made by a filmmaker willing to take it further than you might expect.

Nolan’s customary crew and cast (some present since Batman Begins, others newly devoted since Inception) have all returned to close out the trilogy. Hans Zimmer’s largely percussive score creates a continuous momentum, making the film’s 2-hour-and-44-minute runtime seem to breeze by. Wally Pfister’s lensing, with over 70 minutes shot for the IMAX format, creates a series of instantly iconic scenes, the most eye-popping of which remains the opening sequence, where Bane escapes capture in a skyjacking filmed over Scotland’s gorgeous Cairngorms National Park. Other impressive vehicular sequences constitute most of the action (aside from the Batman vs. Bane fisticuffs), including chases on the “Bat-Pod” cycle and Batman’s new plane, a propelled glider called “The Bat”. Whether functioning vehicles or rendered via CGI, they always look real, which is a testament to Nolan’s ability to hide how he’s doing what he’s doing. Convincing too are the many explosions—from bridges to city streets to a football field—each of which is more frightening to behold than the last. That they’re so convincing allows us to lose ourselves in the story even further. The production reportedly cost $250 million; it was money well spent, and without so many of the unnecessary conveniences (like 3-D) and ultra-modern filmmaking techniques. The end credits proudly declare “This motion picture was shot and finished on film.”

A good portion of Nolan’s budget went to his roster of fine actors, the surprising but welcomed standout being Bale, who puts in his finest Bat-performance yet as a vulnerable, broken, wasted character whose dimensions become more entangled as the film goes on. It’s fitting the series should end with a story contingent on the Bruce Wayne/Batman arc, although Bale’s supporting castmembers each have their moments. Hardy’s cracked voice lends his imposing physique fearsome presence. Hathaway’s version of Catwoman houses inner pains her character is desperate to keep inside, and when they surface, as shyly as they do, it’s effective; she also appears to be having fun in Catwoman’s flirtier scenes. Levitt has the most screentime of any supporting player, and he’s wonderful as Gordon’s new apprentice. And while Freeman, Cotillard, and Oldman all have solid roles, Caine’s performance offers unexpected tenderness.

The Dark Knight Rises contains all the symbolism and narrative complexity we’ve come to expect from Nolan’s Batman films, but with the added enhancement of a massive-scale production that is executed with a brilliant hand. After all the elaborately conceived plotting and spectacle, what the film will ultimately come down to for many is the ending. How does Nolan conclude the story he began in 2005? Does Batman die as so many have suspected? (Actually, the answer could be interpreted as an Inception-like choice for the audience.) Either way, what a bold move—to end a superhero franchise with otherwise unlimited sequel potential. To affirm without reservation that Nolan ends his series in an extremely satisfying way comes with a great relief, although you can expect quibbles from comic fanboys overly concerned (nonsensically, given the material’s origins) with impracticalities. Nolan’s ambitions are far superior than making a mere piece of bubblegum entertainment; he’s more interested in tapping into what superheroes as symbols mean to the audience, and how being a superhero has consequences on the individual. With these ideas in mind, Nolan has accomplished something unprecedented, both as a single entry and as the concluding panel in a larger triptych that will no doubt go unmatched in its genre.