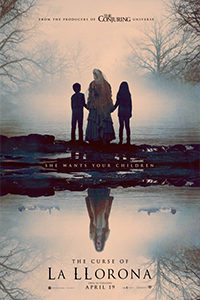 Mexican folklore warns of La Llorona, the weeping woman, the ghost of a villager who drowned her children when their wealthy father proved unfaithful. Ever since, she has wandered the land, doomed to drown her young ones over and over, though she often mistakes the living for her own children. It’s a creepy legend to tell your kids, similar to the ubiquitous Boogeyman or the anti-Santa known as the Krampus. But La Llorona has more in common with Lamia, the child-eating serpent woman from Greek mythology—both women were mothers who, rather than act out against the individuals who wronged them (La Llorona’s husband or the goddess Hera, respectively), take their aggression out on children. Never mind the reasons or justifications behind their child-murdering ways. The lesson of such tales is clear enough: Behave kiddies, or La Llorona will get you.

The Curse of La Llorona exploits this folktale in service of New Line Cinema’s “The Conjuring Universe,” the ever-expanding cinematic continuum that began with The Conjuring (2013) and The Conjuring 2 (2016), spinning off at times into the prequel Annabelle (2014), pre-prequel Annabelle: Creation (2017), and last year’s prequel The Nun. More sequels, prequels, and prequel-sequels are on the way, including another Annabelle movie later this year. The franchise continues, whether you want it to or not, because each entry is relatively inexpensive, and because they earn hundreds of millions at the box-office. Although you might need a flowchart to determine how they all fit together. The connective tissue between The Curse of La Llorona and the other stories amounts to a blink-and-you’ll-miss-it flashback involving Father Perez (Tony Amendola) from Annabelle. Otherwise, it serves as a stand-alone feature.

Set in 1973, the story follows Anna Garcia (Linda Cardellini), a widow and social worker trying to raise her two children Sam (Jaynee-Lynne Kinchen) and Chris (Roman Christou) after the death of her husband, a policeman. When she pays a visit to one of her regular cases, Patricia (Patricia Velásquez), Anna finds that the woman’s apartment has been boarded up and she’s locked her two children in a closet. The mistreated children, rescued from their seemingly abusive mother and taken to an orphanage, end up drowned, presumably by their mother. However, Patricia claims that she’s innocent, that La Llorona killer her children. Worse, she has called upon La Llorona to take revenge on Anna’s children in retribution for her own loss. And so, Anna and her children start receiving visits from a screaming specter.

Scarier than the yellow-eyed, pale-skinned Mexican demon is a subplot that raises questions about Anna’s parenting. When La Llorona touches the children, her grip sears their flesh, and the hauntings leave the family looking tired and depressed. At one point, the ghost pushes Chris and he sprains his arm. When Chris explains to a doctor, “I fell down the stairs,” the doctor sees only signs of an abused child. Inevitably, Anna receives a visit from a fellow social worker, and the paranoid fear that her children might be unduly taken away is stronger than any terror evoked by La Llorona. Unfortunately, the story never resolves this subplot; once the demon is gone, the Garcias live happily ever after, free of any suspicion from Child Protection Services.

The movie, produced by James Wan and directed by Michael Chavez, is your run-of-the-mill supernatural horror yarn of today. Anna and the children go searching for things that go bump in the night, armed with unreliable flashlights (everyone forgets that the house has electricity and light switches). Of course, the house comes equipped with wooden floors that creak and a dark attic that the children explore. Later, when a Latin American curandero named Rafael (Raymond Cruz) agrees to exorcize the demon, the screenplay by Mikki Daughtry and Tobias Iaconis introduces rules as quickly as it dismisses them. At one point, La Llorona touches Sam, leaving her in a catatonic spell. Rafael announces that Sam will remain in a spell until they stop the demon. But a few moments later, Sam runs around the haunted house as if nothing has happened, and the spell is never mentioned again.

The Curse of La Llorona could have had something to say about parenting and single-mothers; it’s on the cusp of a theme about a mother’s love for her children. Perhaps it’s that La Llorona is the antithesis of mothers like Anna and Patricia—parents who will do anything to protect their children. La Llorona learned centuries ago that drowning her children was the wrong way to deal with marital discord, after all. In any case, the movie is entirely unexceptional aside from a committed performance from Cardellini and a few quips by Cruz. Moreover, it never finds an important reason for the 1973 setting, besides taking place between the events in The Conjuring and The Conjuring 2. Future sequels or prequels will doubtless explain what this entry didn’t, not that such a prospect proves interesting.