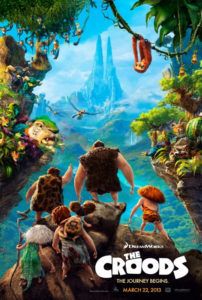 Here’s an animated family picture about a prehistoric family of misfits traveling across treacherous terrain to save themselves from their drastically changing environment. No, it’s not another Ice Age movie. From DreamWorks Animation, The Croods is a handsomely animated adventure about a family of cave-people and, despite the lack of chill weather in the proceedings, the story follows a similar thread as that wintry Fox franchise, except talking animals are replaced by Cro-Magnons who move like apes. Close enough. Based on a concept called Crood Awakening, the film was once developed by both DreamWorks and Aardman Studios, who teamed together on Flushed Away; but the latter studio dropped out of the project, and one can only speculate how the outcome suffered by losing their creative input. Notable is the story’s absent novelty and originality, qualities usually attributed to Aardman and rarely ever present in DreamWorks animation.

Resigned to the safety of cave living, the Crood family follows their paterfamilias, Grug, voiced by Nicolas Cage, who’s clearly enjoying the freedom of voice-acting. Beside Grug, his faithful wife Ugga (Catherine Keener), their feral daughter Sandy, the simpleton brother Thunk (Clark Duke), Grug’s crotchety mother-in-law (Cloris Leechman), and the inquisitive eldest daughter Eep (Emma Stone). Every day, the family heads out into the dangerous world to hunt for food, and before the Sun goes down, they’re back in the family cave, safe and sound. Grug has trained everyone to feel terror for the night or anything out of their normal routine; his mantra “never not be afraid” teaches them a fear of the unknown (and teaches double negatives to the children in the audience). Eep, the story’s narrator, wants to explore the world outside and resents her father’s close-mindedness.

When she sees something bright flickering outside the cave one night, Eep slips out from under her father’s watchful eye and tracks the source to Guy (Ryan Reynolds), a straight-backed thinking breed of human who’s invented fire, among other things (umbrellas, shoes, etc.). Somehow, Guy correctly prophesies the splitting of Pangaea, which forces the Croods out of the cave and into the world they fear. Thrust from their spare and rocky surroundings into an environment, not unlike the fantastical Pandora from Avatar, the Croods find themselves in a colorful jungle of bizarre creatures with decorative fluorescent markings. Eep falls for Guy instantly because he’s different, much to the disdain of Grug, who desperately tries to remain the Alpha Male of his pack, though Guy proves worldlier. Ultimately, Grug and his family must learn that there’s nothing wrong with curiosity or exploring the unknown—a cookie-cutter children’s movie message which helps youngsters develop social skills.

Although the story goes through the motions of a standard Man vs. Nature scenario, The Croods boasts gorgeously detailed animation. Most impressive are the mixed animal designs juxtaposing two unlikely species into one for comic value, such as a miniature elephant mouse, a graceful turtle bird, or the dangerous owl cat. The animators play a predictable game of mix-n-match with flora and fauna, but the animation itself is top-drawer, crisp, and almost tangible, with an appropriate level of cartoonishness in its design. If only the film’s humor were as skillfully applied. Co-directors and co-writers Kirk De Micco (Space Chimps) and Chris Sanders (How to Train Your Dragon) follow DreamWorks standards by appealing to the lowest common denominator through their humor, which is almost exclusively physical comedy, as opposed to, say, wit. When Grug isn’t falling on his face or accidentally setting fire to a field, there’s stale kill-the-mother-in-law humor and pop-culture references abound. More than one character remarks how a situation is a “win-win,” while a recurring joke, if you can call it that, involves Guy’s pet sloth-thing, which notes impending doom by announcing “dun Dun DUN” in a munchkin voice. None of this will be very funny for anyone over the age of ten.

No matter how well the animation distracts, The Croods suffers from rudimentary, by-the-numbers storytelling. Perhaps De Micco and Sanders meant for their audience to lose themselves in the animation, and therefore they put less effort into improving their script (this seems to be a pattern with a lot of today’s animated films). A film centered more on visuals than the story isn’t always a bad thing; the aforementioned Avatar used a similarly formulaic plot and dazzling visuals to involve its audience, but that film had a purity of vision behind it. Granted, by definition, caveman subjects do not incite the brainiest of narratives, but defying expectations is exactly what differentiates animation houses like Aardman, Pixar, and Studio Ghibli from the likes of DreamWorks and Fox. As an afterthought, the film’s talented voice acting brings to life characters who feel at times two-dimensional, even with the optional 3D presentation. But no amount of chuckle-worthy voicework or pretty pictures can make up for how predictable it all feels.