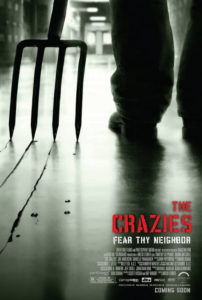 Based on George A. Romero’s cult classic of the same name, The Crazies represents one of those rare cases where the remake lives up to the original, if not exceeds it. That’s because the original cheapie from 1973, while filled with big ideas, didn’t have the budget to support them. There’s no shirking the audience’s need for production value here, at least not in plain sight. Director Breck Eisner makes a capable survival horror movie that doesn’t require too much of its audience, but the thrills and effective jolts make up for what the movie lacks in brains (and brain-eating, for that matter).

Romero’s The Crazies was about a bio-engineered disease outbreak in a small town, which is then overrun by ineffectual government stooges in hazmat gear, their incompetence perpetually worsening the situation. The bio-weapon was called “Trixie,” and it drove victims mad with irrational behavior. The remake uses much the same approach, using the basic setup of the original as a foundation but borrowing from Romero’s zombie-themed fare to enhance the horror element. The citizens of the peaceful farming town of Ogden Marsh suddenly begin to behave strangely; they retreat into catatonia, become pale and veiny, and then lash out in violent rages. They become something between “the infected” from 28 Days Later and the undead from Night of the Living Dead, complete with yellow eyes and blood streaming from every orifice, but they lack any desire to munch human flesh.

The story follows Sheriff David Dutton (Timothy Olyphant, in another likable, muted role), a straight-arrow lawman whose peaceful Iowa town suddenly develops a few problems. When the first citizens begin to show signs of infection, he and Deputy Clank (Joe Anderson) chalk it up to coincidence—that is, until they find a downed military plane submerged in a bog. Dutton worries that the place might’ve contaminated the water supply. Too bad the ignorant mayor won’t budge and let him shut the supply down. Of course, Dutton shuts the water off anyway, but the government has already begun their merciless quarantine by that time. Cell phones and the internet are offline. All vehicles are rendered useless by car boots. No one can escape. Dutton returns home to his pregnant wife Judy (Radha Mitchell), the town’s doctor, and when he does, they’re captured by government goons and thrown into a makeshift processing center. The story progresses when the quarantine breaks and the entire town becomes a madhouse for the disease’s victims. Meanwhile, Dutton and a few survivors try to slip past the military while avoiding the crazed townsfolk.

Suffice it to say, there’s something in the water. As with most zombie-esque movies, horror supplies the means for social commentary. The cause of movie outbreaks is often connected to their respective message. In this case, the movie creates a sense of dread about what’s in your drinking water. The distributors at Participant Media have dedicated themselves to environmental and socially conscious filmmaking, and The Crazies is their most mainstream product thus far. Last year, they released the indie documentary Food, Inc. and Steven Soderbergh’s dramedy The Informant!, both about the horrible truths of our country’s food industry. Later this year, they’re distributing Furry Vengeance, a family comedy about a land developer attacked by forest creatures when his company begins to destroy the woodlands to build a mall. So, I guess the message is to make sure no airplanes containing secret government projects have crash-landed near your city’s water source.

However apt the message to know where your water comes from may be, the movie makes no grand attempts to be anything more than a well-made horror yarn. All the tools of the trade are here, including Eisner’s serviceable direction and affable performances by Olyphant and Mitchell, who are both well suited for this kind of studio B-movie (see A Perfect Getaway or Silent Hill). The tone is serious, not reliant on heavy metal music or too much comic relief, which helps maintain the intensity throughout. And the movie doesn’t resort to mindless gore to sustain its audience’s interest, just solid, straightforward direction.

Given the amount of low-quality trash the horror genre tends to offer, merely well-made is indeed something exceptional these days. And whereas Romero’s admittedly rawer version suffered from distractingly low production values and airs reeking of the 1970s, Eisner creates some elaborate and frightening setups (there’s an intense sequence involving a car wash that will have audiences hanging onto their seats). Eisner is scheduled to helm more remakes in the future, including one for David Cronenberg’s The Brood and another of the classic Creature from the Black Lagoon. After watching his display of obvious talent here, those projects just became something to look forward to.