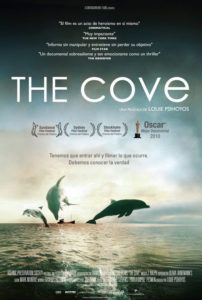 The dolphin hunting season begins every September in Taiji, Japan. Local fishermen round up their boats and create a wall of sound by hammering on metal pipes in the water, frightening schools of migrating dolphins into a nearby bay, using their sonar and sensitivity to sound as a weakness. Once there, the fishermen stretch nets that prevent the dolphins from escaping. From the horde of panicking mammals, shrilling and splashing in terror, buyers select female Bottlenose Dolphins to sell to the world’s cetacean sea parks for hundreds of thousands of dollars; the remaining few are tied up and dragged into a cove within the bay never to return. Some 23,000 dolphins are killed in Taiji each year.

The Cove is a documentary about Japanese dolphin hunting, and while the trailers and other critics might sell the film’s spy-thriller setup in hopes that non-documentary audiences will seek it out, the most powerful element of the story remains the footage of these kills. The film concerns a group of activists, including its director, former National Geographic photographer Louie Psihoyos, and former Flipper dolphin trainer Ric O’Barry, among others, as they conceive an elaborate scheme to infiltrate and capture footage of the highly guarded killing cove in Taiji. And though the thriller aspects work to create an unexpected level of suspense, what is shown in the film delivers the cause’s most powerful blow.

The stakes are highly personal for this crew of homemade spies. The image of dolphins following alongside large seaships or moving freely underwater has long been a symbol of freedom, of Nature’s beauty at its best. This is largely due to the spotlight on these animals created by the 1960s hit TV show Flipper. O’Barry helped transform dolphins into said cultural symbol, but in turn, his work on the show also spawned the fanaticism that inspires theme parks to keep dolphins in captivity, and fishermen in Japan to hunt them down. By making this documentary and getting the word out, O’Barry, who has been arrested countless times for his proactive form of activism since his trainer days, tries to forgive himself for his unintentional role in the exploitation of dolphins today—a trend the Japanese claim is culturally ingrained, though it’s only existed since Flipper.

Guarded by fisherman dependent on their secretive business for their livelihood, the cove in Taiji has its government’s protection. Anyone trespassing is arrested, and once that happens, the detainee cannot return. Lingering hired goons hang around the public spot, physically blocking anyone from getting too close, from peering around the distant corner to catch a glimpse of what happens in there. Clearly, the locals are aware that if their secret is exposed, their operation will be shut down. That seems to indicate that they know what they’re doing is wrong. The IWC (International Whaling Commission), the institution started in 1946 to help guard near-extinct whales, does nothing to help dolphins, considering them too small a cetacean to demand protection. Still, Japan has bribed a number of small countries to help support their cause within the IWC, describing their dolphin killing as “pest control”. Meanwhile, Psihoyos and O’Barry’s Ocean’s Eleven-like team use a combination of smart planning and state-of-the-art surveillance photography—including cameras hidden inside fake rocks mounted on the surrounding terrain, even in the air and under water—to infiltrate the cove and capture footage of the bloody horror going on.

The crisis is not only one of animal cruelty and the irresponsible killing of a species, but that Taiji fishermen have begun to sell mercury-heavy dolphin meat to markets, where it’s misrepresented as whale meat. From on-the-street interviews, the general public in Japan seems appalled by the thought of dolphin meat being sold and eaten. Moreover, the meat contains five-times the limit of tolerable mercury levels. Like humans, dolphins reside at the top of their food chain, accumulating everything inside their prey and their prey’s prey. The levels inside the meat can cause mercury poisoning; it’s become so bad that even dolphins themselves have died from overexposure. The doc’s most appalling moment is when the Japanese government backs an initiative to supply local schools with dolphin meat for children’s lunches; the bravery of two Japanese faculty members standing up against the decision finally overturned the plan.

There’s a point-counterpoint to be made from The Cove to neutralize reactions that might suggest that this documentary is overly biased toward dolphins. Detractors could argue that the United States has our dirty little animal slaughter scams going as well. Watch Food Inc., another activist doc from earlier this year, to see how appallingly the U.S. treats cattle and poultry. We slaughter countless animals on putrid killing floors, package them, and feed them to Americans, who in turn are exposed to relentless disease because of the unhealthy way in which their food was processed. But we’re aware of it, aren’t we? We know that we’re eating cow and chicken and turkey, and we hear about food poisoning outbreaks and recalls frequently enough to prevent a major epidemic. Some of us even laugh as we woof down a hotdog, laughing that it’s probably made from the overflow dropping off the slaughterhouse conveyor—but boy, it sure is tasty.

While I cannot defend the inhuman and unsanitary practices of our corporate food system, comparing our situation to that of the Taiji massacre of dolphins is ludicrous. The most important difference is that our industry—as corrupt and awful as it is—remains an industry that the American people are well aware of. We may not be exposed to the seedy details, but we’re aware that we’re eating beef and poultry and we’re aware of the risks involved. The Japanese people, for the most part, have no idea that they’re being served dolphin, and they certainly aren’t warned about mercury levels. Our food is raised for the purpose of food, whereas the Japanese fishermen contribute to a serious unbalancing of the ecosystem, as does all commercial fishing. Perhaps if the Japanese farmed dolphins specifically for food, then the makers of this doc would be hypocrites just attacking another culture for not agreeing with their own ideals.

But then there’s the issue of intelligence, which overrides all other arguments. Dolphins show self-awareness, as detailed in the heartfelt story by O’Barry where Kathy (aka Flipper) intentionally kills herself out of depression. These are feeling creatures. They communicate. They solve problems. They bond and trust and defend. Stories about dolphins willing to sacrifice themselves to save a human are crucial in discussions of their intelligence. That consciousness, and the proof of dolphins having a culture within themselves, however different than our own, demands that they not be harvested like animals, but rather treated like intelligent beings.

Of course, this is a documentary, and like any documentary, from Ken Burns to Michael Moore, the information is skewed and propagandized to fit the filmmakers’ message. In this case, the Japanese point of view, and indeed the Japanese people are represented as inhuman profiteers careless about the environment. The whalers are depicted as savages, whereas the Japanese people are shown as merely wanting to maintain a status quo, too busy being lied to by their government to do anything about the problem (as the Japanese saying goes, “The nail that sticks up gets hammered down”). Even without these propagandistic devices, The Cove is a staggeringly effective and well-made doc, and despite its subjective representation, it makes a powerful argument for shutting down the Taiji operation. It’s impossible to walk away from it without wanting to take action and support the filmmakers’ cause.