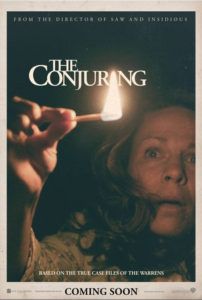 In The Conjuring, you’ll rediscover all those familiar components you’ve seen in countless haunted house movies since Robert Wise all but perfected the subgenre back in 1963 with The Haunting. Vengeful ghosts run amok in a drafty old house where the floorboards creak, and the door hinges all need a shot of WD-40. There’s a poorly lit, spiderweb-strewn basement filled with rickety furniture. Doors tend to shut on their own. Eerie sounds beckon nighttime wanderers to seek them out and reveal themselves in gotcha! moments and jump-scares. A disturbing past becomes the house’s character, and soon it takes over the lives of its current inhabitants. Indeed, this is all standard stuff. But what’s special about The Conjuring is how well director James Wan controls this environment. He uses the setting like a filmic funhouse ride spring-loaded with precisely timed jolts and screams. And boy, what a ride.

Wan has gradually progressed as a filmmaker since his directorial debut in 2001 with Saw, which spawned an increasingly pathetic string of sequels that went on until the ever-profitable franchise ran out of ideas. In 2007, he directed the hokey ghost story Dead Silence and tried to blend a brooding creepiness with bloody gore, but it didn’t quite work. Next, wan attempted to branch out with the lowbrow revenge thriller Death Sentence (also in 2007), which starred Kevin Bacon and, for good reason, went unseen by many. And just two years ago, Wan made Insidious, an intense supernatural thriller with a hook ending so frustrating that it nearly spoiled the entire experience. From this body of work, it’s evident that Wan’s talent has grown over the years. With almost every film he’s made, his influences have been obvious, his scripts have been underwhelming, but his control over the production has been admirable. He’s the kind of director you hope will get his hands on a good script. Finally, he has.

The Conjuring is Wan’s best film to date, mainly because the director applies his precision talent to a story populated by characters whose fates we care about. As with any claim to “based on actual events,” take it with a grain of salt that Chad and Carey W. Hayes based their screenplay on a true story. To be sure, Ed and Lorraine Warren (Patrick Wilson and Vera Farmiga) were actual paranormal investigators who traveled the country, lecturing and exposing the logical (and sometimes fantastical) causes of alleged hauntings. He’s a demonologist, and she’s a medium. Together they’ve disproved and exorcized dozens of homes (even the famed Amityville house). Set in 1971, the film follows their investigation of the Perron family home, a Massachusetts estate that, unbeknownst to the new owners, was once the residence of a Salem witch. Roger (Ron Livingston) and Carolyn Perron (Lili Taylor) move in with their five daughters (Shanley Caswell, Kyla Deaver, Mackenzie Foy, Joey King, and Hayley McFarland), and quickly this Colonial becomes a waking nightmare.

Familiar haunted house tropes begin to emerge: The Perrons’ dog mysteriously dies, the smell of rotting meat drifts from room to room, the clocks all stop at the same time, and the children feel a strange presence pulling on their legs at night. Understandably spooked, Carolyn seeks out Ed and Lorraine and begs them to inspect her home, and the two investigators are instantly overcome with a sense of dread. “There’s something evil in this house,” says Lorraine, a line we’ve heard plenty of times before. What makes all of this more involving than usual is how well the film establishes these characters as generally nice people. Horror movies nowadays are overpopulated with unlikeable characters. So who cares when they meet their demise? But the Warrens, played by Insidious’ Wilson and the talented Farmiga, are a pleasant couple, and this particular case affects them deeply. The Perrons seem like sweet, innocent folks, and we want nothing bad to happen to them.

Nevertheless, Wan puts them through the wringer, using several tricks from his other works. As with his previous movies, there’s a creepy, possessed doll and an unsettling tune that chimes from a child’s toy. And much like Insidious and Dead Silence, the film harbors an angered spirit bent on tormenting innocents. Still, Wan demonstrates how well he’s planned out his scares by avoiding Shaky-cam chaos or stationary “found footage” cams. He uses CGI to portray ghosts and ethereal shadows, but he relies on this device in moderation. With his director of photography John R. Leonetti employing muted 1970s color tones and precise camera movements, Wan uses inventive camera angles and shots that suggest he’s a director interested in slick filmmaking. Accompanying the sharp visuals is Joseph Bishara’s predominantly deep string score, which reverberates right to the bone.

Not every aspect of the production is so unswerving, however. There are one or two gaping holes in the script that might become frustrating upon reflection. And it’s clear that in post-production, Wan added ghostly whispers to which the actors onscreen do not react. When one character goes looking for what went bump in the night, all is silent except for an indistinct voice murmuring, “Look at what she made me do.” The character continues his search; he doesn’t flinch or respond to the whisper by saying something appropriate like “Who said that?” Scenes relative to this description occur more than once and prove distracting. Despite these rare moments of incongruity, The Conjuring draws us in not only with Wan’s technical trimmings but with pleasant characters forced into extreme circumstances. Moreover, Wan doesn’t splatter the screen with blood and gore, nor does he saddle the film with an ending engineered to build on a franchise. Instead, he relies on classical tension-building techniques used with expert care. And he wraps the story up nicely to deliver one of the most satisfying horror movies of its kind in recent memory.