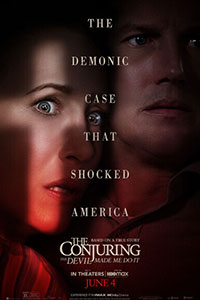 The Conjuring: The Devil Made Me Do It has a deceptive title. The movie concerns a young man who commits a murder while possessed. By whom or what is he possessed? That’s the central mystery. Looking closely at the title, it suggests “The Devil,” which implies that Satan is the culprit. Of course, the term “devil” can refer to any number of evil forces, but when preceded by “the,” it usually infers Lucifer himself. But in the Conjuring movies, and most other examples of supernatural horror, demons, minions of the Devil, typically do the possessing. For example, the mother of all possession movies, The Exorcist (1973), involves a demon called Pazuzu. No matter how absurd their names, demons take over creepy dolls and inhabit vulnerable people who live in creaky old houses, while Satan sits back and enjoys the show. And yet, based on the title, the second sequel to 2013’s The Conjuring is about the Devil. But you might be surprised to learn that neither a demon nor the Devil is pulling the strings. It’s something else altogether. New Line Cinema could have avoided this confusion had they just called the movie The Conjuring 3.

The title refers to the real-life trial of Arne Johnson from 1981, the first recorded instance of demonic possession used in a legal defense strategy. The widely publicized case, situated in the media-fuelled Satanic Panic, centered on a young man who killed his landlord while supposedly under the influence of supernatural forces. Ed and Lorraine Warren, paranormal investigators extraordinaire and never ones to shy away from publicity, played a significant role in the case, even if their so-called evidence of Johnson’s possession wasn’t enough to acquit him. Screenwriter David Leslie Johnson-McGoldrick, who worked on the story with series regular James Wan, delivers another Conjuring movie based on actual events. But the true story is just a launchpad for the series’ usual shenanigans: deafening exorcism sequences, dark figures standing in the shadows, and other-worldly forces scheming for the souls of innocents. Unlike the previous movies, however, this entry lacks any sense of charm.

The movie opens with the exorcism of an 8-year-old boy, David Glatzel (Julian Hilliard, from Color Out of Space). Like slipping into a pair of comfortable old shoes, Patrick Wilson and Vera Farmiga play the Warrens, who preside over the Christian ceremony. At the height of their frenzied Bible reading and David’s spider-walk, the evil entity transfers from David to Arne (Ruairi O’Connor), boyfriend of David’s sister Debbie (Sarah Catherine Hook). No one realizes this except Ed, who has a heart attack before he can tell Lorraine. When Ed comes to in the hospital, Arne has already started hallucinating grim figures; his eyes occasionally go black, and his skin looks pale. Then Arne sees a specter attacking Debbie, so he strikes back, stabbing the thing 22 times. It turns out Arne has just killed their obnoxious landlord Bruno (Ronnie Gene Blevins). After his arrest, the Warrens try to find proof that Arne wasn’t responsible for his actions. Ed argues that, “The court accepts the existence of God every time a witness swears to tell the truth.” So why not the Devil? 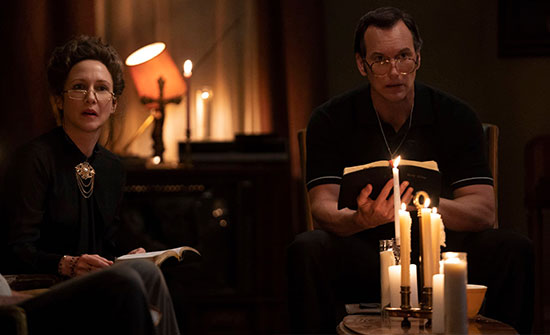 He has a point. Why some elements of Christianity remain part of America’s legal system and government, but not others, could inspire a vigorous debate in a courtroom drama, but not a horror movie. The Devil Made Me Do It has that discussion with a few throwaway lines of dialogue, preferring to follow the Warrens’ search for paranormal clues. When they learn about another story of possession that ended in a similar 22-time stabbing, the trail of breadcrumbs leads them to a Satan-worshipping witch. According to the retired Father Kastner (John Noble), an expert in the occult, “A witch’s sole aim is chaos. Its nectar is despair.” That’s the only explanation of how the witch has selected her victims, who become afflicted with a demon. And while the Warrens race to uncover proof and locate the witch, Arne’s case becomes an afterthought. Worse, the usual scenes that build upon the relationship between Ed and Lorraine, the emotional foundation of the Conjuring movies, feel underused—their relationship becomes more fragile with Lorraine’s concern over Ed’s wavering health.

Wan, who directed the first two movies and served as producer of everything in the so-called Conjuring Universe, hands the reins to Michael Chaves, helmer of the Conjuring-adjacent The Curse of La Llorona (2019). Chaves doesn’t have Wan’s funhouse approach, even though The Devil Made Me Do It still offers the series’ ever-impressive period details and production design. Nevertheless, it’s a handsome-looking movie, particularly near the end when the Warrens find themselves running around in underground tunnels and hunted by Eugenie Bondurant’s occultist. Cinematographer Michael Burgess lights the sequence as if illuminated by a hellish red light. The acting and coherent editing prove capable as well. The problem with this movie is the script’s contingent of underdeveloped characters and unengaging dialogue. After enjoying the cute relationship between Ed and Lorraine in the previous two movies, something about the characters failed to connect with me this time around, signaling that the series has gone on autopilot.

If The Conjuring were a television series, The Devil Made Me Do It would be a mediocre episode—an obligatory watch that gets you to the next one. But given the track record of this cinematic continuum, the prospect of a “next one” is hardly a reason for excitement. Since the spin-offs (the Annabelle trilogy, The Nun, et al.) prove forgettable, the Conjuring Universe rests on two strong offerings, The Conjuring and The Conjuring 2 (2016). This series, like the Saw franchise, might need to take a hiatus due to creative exhaustion. And with any luck, the Conjuring movies will find a better solution to revamp their series than Saw, whose two attempts to reboot faltered. In the meantime, The Devil Made Me Do It forces me to wonder if this is my last Conjuring movie. If you were watching a television show and enjoyed only two out of eight episodes, wouldn’t you stop the series and try something else?