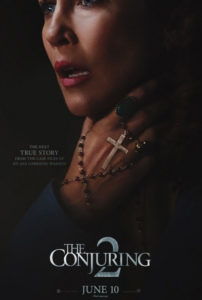 In The Conjuring 2, director James Wan opens another case file of real-life paranormal researchers Ed and Larraine Warren, the couple who made their name during the infamous Amityville haunting. In fact, during the film’s prologue, the Warrens appear at the Amityville house, where previous owners claimed a demonic presence drove them out. During a séance, Lorraine tries to make contact with whatever may be haunting the house, and she sees a horrific premonition. “That’s as close to Hell as I want to get,” she tells her husband after coming out of her trance with a gut-wrenching scream. The audience can’t help but react to several effective jolts and unsettling moments during this sequence, and the titles haven’t even appeared onscreen yet.

A masterful screw-turner, Wan’s sequel to his 2013 hit The Conjuring doesn’t dwell on the Amityville case, although what happens in Amityville doesn’t stay in Amityville. As we learn, that case was contested in the media, while the Warrens’ respected names were unduly tarnished. Wan and his three credited screenwriters use Amityville only for dramatic backstory, despite how the name alone could draw audiences. Indeed, the Amityville case hangs over the heads of our two investigators, once again played with warmth by Vera Farmiga and Patrick Wilson. And, along with the sequel’s 133-minute runtime, the story’s concern for characters over profits should tell you The Conjuring 2 is more than another cash grab like the 2014 prequel, Annabelle. Then again, they’ve injected gimmicks elsewhere to ensure the sequel performs just as well as the original (earning $137 million on a $20 million budget).

Wan wants you to care about Ed and Lorraine Warren, and by choosing the suitable case through which these characters grow, he makes a better kind of exorcism film. After creating a wholly satisfying movie version of the Warrens’ 1971 event at the Perron family home in Harrisville, Rhode Island, Wan’s saga moves ahead to 1977. The location is Enfield, London, in a dilapidated council house that should be condemned. There, troubled single mother, Peggy Hodgson (Frances O’Connor), looks over her four children, all of whom suffer from a presence in the house—the voice of an old man speaking from within the dark: “This is my house,” says the man in a gravelly voice. Peggy’s stuttering, biscuit-obsessed youngest, Billy (Benjamin Haigh), is taunted by his toy firetruck, as well as his creepy zoetrope figure called “Crooked Man” and its accompanying song. But the poltergeist’s main target is Peggy’s middle daughter, Janet (Madison Wolfe), who becomes the spirit’s plaything.

After Amityville, Lorraine feels reluctant to accept another case. But Ed’s good-hearted, helping nature convinces her, despite a warning from a particularly spooky demonic presence that has followed her since Amityville. So the Warrens head to London, conspicuously leaving their teenage daughter home alone during Christmastime, and team up with a resident skeptic (Franka Potente) and British paranormal researcher (Simon McBurney) to investigate the Hodgson home. Much like its predecessor, the sequel takes its time to develop the Hodgson family’s dynamics. It shows how everyone wears down after constant tormenting by the ghost of an older man (no doubt by design, his wheezy devil voice seems a few decibels higher than everything else on the audio tracks). We’re further bonded to the characters when the Warrens appear in the Hodgson home and Ed, his Elvis sideburns in full effect, sings the family “Love Me Tender.”

Though evidence suggests the Hodgsons have faked the haunting, paranormal entities in The Conjuring 2 are among the best in Wan’s considerable haunter library, even better than the red-faced monster in Insidious (2011). The decrepit old man after Janet looks dead, his eyes glowing yellow in the dark. But then, even worse is the white-faced, yellow-eyed nun appearing to Lorraine in her visions; its facial features elongated, its mouth full of dreadfully sharp teeth, the thing makes frightening use of Ed’s painting. Elsewhere, the “Crooked Man” (a character, like Annabelle, due for a spinoff) stands about seven feet tall and bears a resemblance to Jack Skellington. And regardless of how it may sound, the sequel isn’t a creature feature. Overall, Wan has made another genuine appreciation of the Warrens’ efforts, honoring the characters with a somewhat saccharine last scene.

Cinematographer Don Burgess lenses actual London street locations with eerie winds blowing dead leaves. The production design by Julie Berghoff captures the sheer grossness of the Hodgsons’ home, especially their flooded basement. A series of photographs from the real-life case are placed next to the production’s sets and costumes (excellent, by Kristin M. Burke) during the end credits. Two things become clear from these side-by-sides: 1) Wan and his team have done a wonderful job recreating one of the Warrens’ most investigated cases, and 2) the Hodgsons were much worse off than the film depicted. At any rate, Wan, returning from his horror hiatus on Furious 7 (2015), once again demonstrates he’s a horror craftsman, knowing just how to play up to the audience’s expectations and how to defy them.

As mentioned above, The Conjuring 2 ends on a cornball note and sentimentalizes Ed and Lorraine Warren, but that’s part of the film’s charm. How often do you see a paranormal thriller where you’re more concerned about the paranormal investigators than the people haunted? Wilson and Farmiga hold the otherwise typical proceedings together, making the usual mechanics of a filmic haunting feel dialed-up on emotional terms. Then, of course, Wan’s excellent delivery of the requisite jump-scares and loud booms have us punishing our seats with all our jolting, armrest gripping, and squirming reactions. Setting this sequel and its predecessor apart from the usual supernatural fare, Wan brings cinematic integrity to familiar material, from the writing to the execution, which should not go unnoticed or unappreciated.