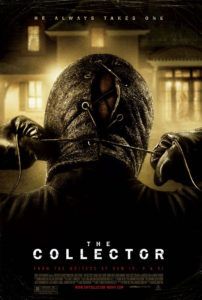 Here’s another pointless horror movie about a masked serial killer slaughtering innocents with elaborate traps. The Collector comes from the makers of the last few Saw movies, meaning the whole production consists of loud industrial music and an overuse of color saturations. The visuals are dark and gruesome, and the cinematography is best-suited for a music video. Nothing before or after the movie’s meat, a string of horribly bloody murders, makes any sense. So the only reason to go is to see the new and horrendous ways the writers tally a body count.

The story, you ask? What is it about? Oh, the usual. Some semi-deformed weirdo wears a mask and collects victims that fit whatever his sick tastes call for, and incidentally, we never learn the motivation behind his tastes. A nice family moves into the wrong house where the former owners disappeared (one guess where they went). On their first night, the new owners are taken captive by the resident psychopath whose glow-in-the-dark cat eyes reminded me of those bat-creatures from The Descent. He sets the house like a mousetrap with wires and pulleys and mechanics too complicated to complete in just a few hours. (When did he have time to set this up? Did he hire some handymen to come over and help? The movie never explains how the killer installed these torture devices—it’s enough that they’re there.)

Why he bothers setting up all these traps when he’s already captured the family, well, just ignore that detail. The writers did. The traps seem constructed exclusively to catch the hero, Arkin (Josh Stewart), a would-be jewel thief who breaks in to rob the family’s safe. But how would the killer know anyone was coming, especially when the movie notes how the family’s house is secluded in the middle of nowhere. When Arkin slips in, he finds everyone in the meat grinder—only their youngest daughter, Hannah (Karley Scott Collins), has escaped the killer’s clutches. Arkin has a deadline of midnight, by which time he must return a precious stone the size of his fist to the loansharks out for the neck of his estranged wife. But having a daughter himself, he can’t just leave young Hannah alone to become the next victim. So using his burglar skills, he tiptoes around the house under the killer’s nose, trying to save whomever he can, though he’s not very successful.

Moments where Arkin just barely eludes the killer by his wily footwork contain some suspense, but nothing involves the viewer beyond wanting someone, anyone to survive this ordeal. The acting is flat, the production is over-directed (complete with CGI zoom-ins on spiders, just to remind us how the killer is like a predator), and the script is utterly humorless (if your horror movie is going to be this bad, at least have a sense of humor about it). You can’t laugh at it. It won’t scare you. So the only reason to watch is for a gore fix. It’s a movie that’s set-up exclusively to purvey ghastly violence. Mostly diehard horror hounds will be sniffing this one out.