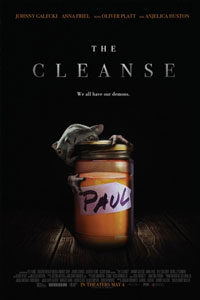 Bobby Miller graduates from short films to full-length features with his debut, The Cleanse. His Cronenbergian satire premiered at South by Southwest in 2016 under the name The Master Cleanse before finally arriving in limited release, primarily on VOD, more than two years later. The concept, involving participants in a self-help program that expel their mental and bodily toxins into slimy little physical manifestations, remains loaded with possibilities—many of them already explored to their fullest degree in David Cronenberg’s The Brood (1979), the grim family horror film of raw emotions and nasty little demon children born from an abused psyche. Inject a dose of humor and cut down on the body count, and Miller has essentially made a riff on that film. But Miller’s promising cast, confident direction, and deliberate pacing have few payoffs in the screenplay, which relies too heavily on the concept in place of characters and emotions to guide the film.

After being left at the altar by his fiancée and losing his job, Paul (Johnny Galecki, best known from The Big Bang Theory and Roseanne) descends into self-pity, drifting through a drab life of despair and solitude. During a bout of late-night television, Paul sees an infomercial for a new mind-body treatment that promises renewed health by purifying the body and mind. He scribbles down a website, LetsGetPure.com, and later finds himself at their crummy office location, where it looks like he might be either recruited into a cult or sold a timeshare. In order to qualify for the company’s retreat, he must confess his inner pain on camera for reasons that are never really made clear. There’s a lot of that going around in The Cleanse, where moments of consequence never develop into anything interesting.

Paul eventually arrives at a mountainous retreat alongside a small group of fellow enlistees. There’s Maggie (Anna Friel), an aspiring actress used up by Hollywood, and a young couple—the broh Eric (Kyle Gallner) and his quiet girlfriend Laurie (Diana Bang)—who seem interested in any get-healthy-quick gimmick. The resident Igor, a skeleton-thin Fredericks (Kevin J. O’Connor), escorts each party to a private cabin and welcomes them to meet their chipper, New Agey guide, Lily (Anjelica Huston). Each of them receives four doses of cleansing juice, which look mason jars used for cleaning paint brushes, and they’re told to drink every gag-inducing drop by the end of the day. Before long, Paul’s body purges, ridding itself of negative toxins in the form a squishy creature—a somewhat cute and horrific blob with puppy-dog eyes and a constant expression of “Please kill me.”

Beyond this turn, Miller’s screenplay doesn’t explore much about the company or where its founder, Ken Roberts (Oliver Platt), devised his purging formula. After the first act, the story meanders when Paul and the others refuse to carry out the symbolic gesture of the Let’s Get Pure system: stabbing their toxin monster to death. The puppet work used to render the beasties is enhanced by CGI, leaving them to appear quite realistic, like the fantasy fish and reptile parts from Cronenberg’s eXistenZ (1999). And as the creatures remain alive, they grow, reflecting how people often maintain dependencies on their problems, using them as a crutch to prevent inner growth. Nevertheless, Miller doesn’t get too deep into the emotional lives of his characters—a mistake, given the symbolism of the concept. As for the actors, Galecki has nothing much to do beyond play the sad sack; Friel’s character seems timely but underdeveloped; and neither Huston nor Platt feel utilized to the extent of their talent.

Shot on digital by d.p. Michael Fimognari, The Cleanse looks sharp, if noticeably modest, with production designer Patrick M. Sullivan Jr. making the most of the film’s simple interiors and forest locations. It appears as if most of the budget was spent on actors and special FX, whereas Miller’s quiet and measured application of style proves minimal. The assured technical package and familiar faces suggest there’s more here, but the narrative meanders and never seems to achieve a third act. During the brief 81-minute runtime, the characters barely grow or change—or even find much definition—while the audience is left wondering about the origins of the cleanse program. Miller’s doesn’t have much to say with his derivative concept, besides the obvious metaphor, and the film quickly runs out of ideas well before the midway point. Audiences curious to see a similar concept explored to its fullest should revisit Cronenberg’s aforementioned The Brood.