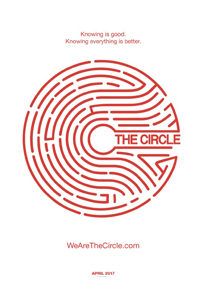 In the eighteenth century, English philosopher Jeremy Bentham designed a prison called the Panopticon. Designed in a circular structure with a single inspection tower at the center, the prison’s guards sat in the tower, watching the inmates in the inner perimeter of the circle that was lined with cells. Bentham’s belief was that people—in this case, inmates—behave better when observed, and due to a clever masking of the guard tower, the inmates of a Panopticon never know when they’re being watched. As a result, Bentham theorized, the prison inmates would be well behaved. Although Bentham designs were never put into practice, not exactly, the same basic principle is the driving force of The Circle, although in place of a prison, social media remains the ever-watchful eye observing your every move.

Dave Eggers adapts his own novel alongside co-writer and director James Ponsoldt (The Spectacular Now, The End Of The Tour), delivering a film that functions like a world-upside-down episode of Black Mirror, except less edgy. It involves a Google-like company called The Circle, whose ubiquitous “TrueYou” sign-on gets users access to a digital world of connectivity. Everything in The Circle is about sharing and building both digital and real communities—and if you’re not connected, there’s clearly something wrong with you. It’s headed by the company’s Steve Jobs-like co-founder Eamon Bailey (Tom Hanks), who holds Friday meetings to unveil the latest product launch. Employees watch Bailey preach about The Circle’s newest thing, all of them laughing a little too hard at his bad jokes, being a little too impressed with the latest innovation, not pointing out some gross violations of human privacy, and shouting “sharing is caring” without irony.

Enter Mae (Emma Watson), a customer service temp whose friend (Karen Gillan) lands her an interview at The Circle. Mae gets the job, and she soon finds herself in The Circle’s world of mandatory fun and biometric trackers that are sneakily fed to unsuspecting employees. Nevertheless, Mae seems just fine with drinking the Kool-Aid, despite warning signs and invasions of privacy all around. For instance, her fellow employees instantly know about her parents (Glenne Headly, the late Bill Paxton in his final role) managing her dad’s MS. The Circle’s community also shames Mae’s childhood friend Mercer (Ellar Coltrane, from Boyhood) as a “deer killer,” forcing him into seclusion after she posts a photo of his homemade antler chandelier. Mercer attempts to be the voice of reason, suggesting that real face-to-face connections are preferable over The Circle’s false community, but then Mercer is an underwritten device-of-a-character. And Mae seems to get the message, especially when The Circle’s other co-founder (John Boyega) voices his disdain with the company’s direction under Bailey.

The viewer might suspect that Mae will teach everyone a valuable lesson about the importance of internet privacy. After all, early in the film, she kayaks alone to a secluded spot and cries—not the actions of someone who always wants to be connected. But then later, there comes a kayak-centric turn, and the film leaves no one worth rooting for. After a chat with Bailey and his corporate-stooge partner (Patton Oswalt), Mae publicly professes that “secrets are lies” and thus privacy should be abolished. She agrees to go “transparent” and resolves, without reservation, to submit her life, phone calls, and emails for open public consumption online. Think The Truman Show in an already Orwellian world, where Mae’s millions of followers constantly troll her every action or live vicariously through her. Of course, she soon learns the downfalls of a company capable of controlling its billions of users; however, it’s not enough to sway her newfound views on rampant online sharing and the control—over, say, political elections—that affords.

In the end (spoilers ahead), the message of The Circle feels muddled. Unlike an episode of the aforementioned Black Mirror, the film’s lesson is not quite apparent. There are two options: 1) the film presents an allegory for how social media has saturated the world and presents a critique of that trend, sacrificing its protagonist in the process; 2) the film sides with Mae, who ostensibly gets the bad guys in the end, but who also determines to eliminate privacy because, in essence, the internet doesn’t kill people, people kill people. So as Mae resolves to expose the world to The Circle’s limitless observation and connectivity, some might feel imprisoned in a Panopticon; others might feel encouraged and supported by the digital connections made to billions of users across the planet.

Ponsoldt delivers a polished production, as production designer Gerald Sullivan gives us a futureworld that looks about six months away from becoming a reality, while cinematographer Matthew Libatique (Iron Man, Chi-Raq) offers a series of long, fluid Steadicam shots that keep the material visually active. Ponsoldt and Eggers also saturate every scene after Mae’s “transparency” with a barrage of pop-ups and random comments from her followers, and the effect becomes tiresome after a few minutes. (We’re left wondering how it wouldn’t be tiresome after hours, days, weeks, etc.) The Circle boasts a lot of talented actors, such as Hanks, who uses his endless charm in a rare, if convincing bad guy role. But the film never delves into a thorough consideration of its concept; and what’s more, the story lacks a narrative thrust to support its otherwise neat ideas. The result feels rather empty, while its lack of a strong conclusion or stance robs the viewer of a more tangible lesson.