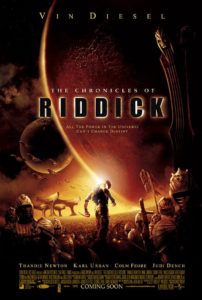 In writer-director David Twohy’s The Chronicles of Riddick, Vin Diesel reprises his role as the growling, badass anti-hero Richard B. Riddick from 2000’s Pitch Black. This follow-up, a decided bomb, was released in 2004 and, domestically, earned back only $57 million of its purported $120 million budget; worldwide, its underwhelming performance wasn’t so bad, earning upwards of $115 million. Like its predecessor, the sequel has since garnered a cult following, but it’s far less deserved than the cheap entertainment value of Pitch Black. Rather, The Chronicles of Riddick has lofty aspirations, with Twohy attempting to achieve a grand space opera on par with Star Wars or Frank Herbert’s Dune. The result is self-indulgent nonsense filled to the brim with pointless action sequences and a planet-hopping plot that seems to go nowhere.

For those unfamiliar, let’s catch up: Pitch Black was a satisfying stand-alone concoction mixing Alien with Escape from New York in which Riddick, the resident Snake Plissken, must escape from an alien-infested planet. He does, along with sole-survivors Imam (Keith David) and a teenage girl named Jack. There, now you’re caught up. The Chronicles of Riddick takes place some five years after the first movie and finds Riddick hunted by “mercs.” There’s endless talk of “mercs” (short for mercenaries), so much so that you’ll never want to hear the word “merc” again. But I digress. The bounty hunters were hired by Imam, who, after hearing a prophecy from a wispy Air Elemental, Aereon (Judi Dench), sought Riddick to warn him that he’s been foretold as the only person capable of stopping the evil Necromongers.

By now, you’re probably wondering, what’s an “Air Elemental” or “Necromonger”? No one but Twohy himself could explain with any clarity. In an attempt to imbue The Chronicles of Riddick with enough action to appease its B-movie audience, Twohy skipped over adequately defining the mythology which serves as a foundation of the story. Suffice it to say, Dench’s white-clad, semi-transparent presence as Aereon represents the forces of Good, while the Necromongers, decked-out in creepy-faced armor and cold metal, represent Evil. The Necromongers are some kind of religion where its members are half-dead and determined to reach someplace called “Underverse.” Led by Lord Marshal (Colm Feore), whose top general Vaako (Karl Urban) schemes with his snakelike Dame (Thandie Newton), the Necromongers want to obliterate all life in the universe. Who better than Riddick to stop them? As the poster reads, “Fight Evil With Evil”.

Then again, Riddick was never really evil, was he? He’s an anti-hero, to be sure. He’s also moody and grumbles his dialogue. But he’s a killer-with-a-heart-of-gold by the end of Pitch Black, and within the first few scenes of The Chronicles of Riddick, he remarks on how adorable Imam’s young girl is—and later risks himself to save Imam and his family. Does this sound like evil, risking himself to save a family? This is part of the problem with The Chronicles of Riddick. We never question our hero’s loyalties or suspect that he might behave in a characteristically “evil” way. Grumpy? Yes. Badass? Definitely, yes. Evil? Here’s another example of why not: At the film’s midpoint, Riddick finds himself in an underground prison planet where he discovers Jack, who’s renamed herself Kyra (Alexa Davalos). There, prison guards unleash snarling, chameleon-skinned hounds, one of which becomes Riddick’s best friend. Taming wild beasts isn’t usually in the repertoire of someone described as “evil”.

At any rate, Twohy rushes the plot along faster than someone casually glancing at Cliff’s Notes to a short story (even in his 135-minute Director’s Cut), forgoing any structural use of tension or emotional drive for his protagonist. Despite the space opera setting, Riddick doesn’t grow or become significantly involved in anything happening onscreen. And while such a characteristic seemed appropriate when Riddick was fighting ugly aliens on a dark planet in Pitch Black, when the universe is at stake, and his friends are dying around him, the hero should show some sign of emotion. Instead, Twohy and Diesel have preserved Riddick’s one-dimensional badass status; he’s reduced to the kind of monosyllabic retorts and cheap one-liners of which Diesel is a champion. Likewise, none of the supporting cast—not Dench, David, Urban, Feore, or Newton—stand out with a memorable performance, their characters mere components in a familiar yarn ripped from better science-fiction tales.

In place of the lean, mean, fighting machine that was Pitch Black, or even the modest entertainment value of the director’s 1996 feature The Arrival, Twohy loses himself in big, broad-stroke ideas that aren’t backed up by the film’s vapid center. Silly spatial names like “Underverse” and “Crematoria” are just as overwrought as the uniformly campy performances onscreen, the whole project more attuned to a failed TV pilot for the Syfy Channel. The special FX alternate between impressive and laughably bad, and the cutting by three credited editors relays almost no shot-to-shot logic throughout the film. Worst of all, the viewer gathers a sense that The Chronicles of Riddick thinks it’s on the same level as the epic sci-fi spectacles of Lucas and Herbert. But its high opinion of itself only aggravates our awareness that Twohy has failed in almost every respect to create something so superior, or even watchable.