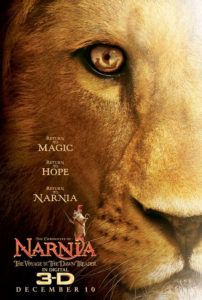 From a swashbuckling volume in C.S. Lewis’ collection of Narnia books, The Chronicles of Narnia: The Voyage of the Dawn Treader arrives without the buzz that made the first film so popular among audiences. Accordingly, this third entry in the fading franchise had a rough time making it to the screen, and the new filmmaker and studio behind the production changed little in the overall tone or approach previously given to the material. Yet, this should be the most plainly diverting entry of the now-formed trilogy, as the plot concerns seafaring action, monsters and magic, and one furry Jesus-Lion—all wrapped up in a bundle of genre clichés and transparent moral lessons. But the limitless possibility of fantasy has rarely felt so unimaginative; and it’s only made worse by the repetitive plot structure and the series’ consistently wooden acting by the central performers.

Though pre-production on the third Narnia film began in 2007, after disappointing returns on Prince Caspian, Walt Disney Company made a wise choice in 2008 and refused to finance the picture unless the budget was cut by almost a third. When terms between Disney and Walden Media couldn’t be reached, the House of Mouse dropped out completely, delaying the production and scheduled release by more than a year. Coming to the rescue, Twentieth Century Fox floated the bill and ordered late-in-the-game rewrites, hoping to avoid the dullness of the underwhelming second feature. And though the financiers and distributors have changed from the first two films to the third, the latest Narnia adventure is just as bland as its predecessors, if not more so.

The two younger Pevensie children—the power-hungry Edmund (Skandar Keynes) and the flowering teen Lucy (Georgie Henley)—remain in England, as the two elder siblings (who appear only in brief cameo) are off in America doing who-knows-what. While bickering with their snobby cousin Eustace Scrubb (Will Poulter, from Son of Rambow), all three are transported to Narnia, where they convene with Caspian (Ben Barnes) on the bridge of his sea ship, the Dawn Treader. Caspian has undertaken a perilous mission to find seven lost lords and their magical swords, which when joined at Aslan’s table will restore order to their world—recently unbalanced by a green mist that emanates from an evil island, called, quite to the point, Dark Island. So Edward and Lucy bravely join the voyage, Caspian plays Errol Flynn, and the obnoxious Eustace provides no end of complaining in failed attempts at comic relief.

Their mission becomes monotonous within minutes. Looking for the missing lords among the secluded Lone Islands in the Narnia seas, their search parties go ashore each island, and on each island someone is kidnapped, and every time someone is kidnapped the rest of the party must rescue them. This happens again and again, each island featuring its own unique obstacles like levels in a videogame. On one, the crew faces a clan of slave traders; on another, a group of large-footed invisible men; on yet another, they find a dragon. And by the time they leave each island, the stop has produced another sword. There are no epic combat scenes with armies clashing, unlike previous entries. Although, a number of smaller scale skirmishes occur, each of them preceded by the heroes’ battle cry “For Narnia!”—which becomes as frequent and as tedious as the soldiers from 300 shouting “For Sparta!” When they finally reach Dark Island, which by its name you can guess is dark, and an island, the Final Battle involves a spidery sea serpent, though the sequence feels all-too-familiar when compared to the Kraken attack in Pirates of the Caribbean: Dead Man’s Chest.

Michael Apted, who’s had his share of highs (Gorillas in the Mist) and lows (The World is Not Enough), takes over directing duties from the helmer of the first two releases, Andrew Adamson. Along with inferior computer effects that look second-rate even when compared to the first movie, made five years ago, The Voyage of the Dawn Treader arrives in post-converted 3D, meaning none of the “third dimension” shots look quite right, and the effect distracts more than it augments. In his defense, Apted didn’t plan on shooting the picture in 3D; that decision was made by the studio after principal photography had been completed, so he can hardly be faulted. But there’s no defending Apted’s bland presentation, nor the simplistic ways in which he offers the heavy-handed meaning behind the story and its inherent, blatantly realized religious symbolism.

Not all just swordplay and CGI, the movie contains oodles of corny life lessons for our heroes to learn thanks to the three credited screenwriters (Christopher Markus, Stephen McFeely, and Michael Petroni). Edmund needs to be reminded once again that power isn’t everything, a message that should have absorbed after The Lion, the Witch and the Wardrobe; Lucy learns that envying her sister’s overstated good looks will get her nowhere, because, you know, it’s what’s inside that counts; Caspian learns to stop living in his father’s shadow; and after his stint as a dragon, Eustace realizes that reality is overrated. Each child in turn “finds themselves”, making a return trip to Narnia pointless. In other words, no more Pevensie children in the remaining four stories, should Fox, or another studio, opt to adapt them.

Apted never misses a chance to over-explicate, especially when Aslan reminds the Pevensies that even if they never return to Narnia, on plain-old Earth he exists in another form (hint: It’s Jesus!). This sort of watered-down fantasy, with its banal senses of morality, conflict, and character “development”, represents a potent anti-imagination that diminishes any hope of taking the film seriously. The adventure scenes are lackluster, the performances are so plain-to-substandard that they’re hardly worth mentioning, and Apted’s direction does nothing to improve on the franchise’s tasteless flavor. It would come as a shock to this critic if The Voyage of the Dawn Treader wasn’t the last in this ever-disappointing series of fantasy films.