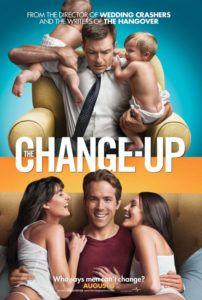 Implementing its tired body-swap scenario with a knowing smirk, The Change-Up uses this asinine pretext as a staging ground for an inappropriate humor and heart concoction reminiscent of Judd Apatow’s works. From one extreme to the other, it blends raunchy, fast-paced laughs with astute life lessons about the dangers of yearning for greener pastures. Jason Bateman and Ryan Reynolds play friends who make an impromptu wish and—poof!—swap bodies, each one’s mind transported into the physique of the other à la Freaky Friday (or, if you prefer, Vice Versa). This setup on its own wouldn’t be interesting, but the wildly funny dialogue throughout and energetic performances rescue the film from banality and make it one of the most riotous, bromantic comedies of 2011.

Bateman plays Dave, a straight-laced lawyer whose entire life has been about building a sense of security for his wife (Leslie Mann) and three children—one a grammar school ballerina, the other two babies. Mitch (Reynolds) is predictably Dave’s opposite (because body-swapping two similar guys wouldn’t be interesting), and has never known responsibility. He swears like a sailor, always has sex on the brain, wants to be an actor but has no real prospects, and lives a promiscuous bachelor lifestyle in his college-dorm-room-of-an-apartment. Yet, both men envy each other. As they urinate in a public fountain together after an evening of drinking, they simultaneously wish for the other’s life, and overnight the swap occurs. Getting back to normal is contingent on once more wishing at the fountain, which was moved for restoration, and so the guys have about a week to realize they prefer their old lives.

Several gross-out moments and outrageously that’s-just-wrong-style gags present a rude awakening for both men. Mitch quickly learns that married life isn’t quite what he expected after watching Dave’s wife prance around naked, only to make her way to the toilet where she unloads her bowels with the bathroom door open. After that, Mitch has to wake up for a 3 am feeding session with Dave’s babies, a maniacal twosome, one who bangs his head against his crib and the other who gets a hold of kitchen knives and tosses them like a circus pro. Noticeable CGI builds these moments, so audiences can rest assured the baby actors were never in any harm, and, oddly, Mann maintained her integrity by sporting a pair of computer-generated breasts during a topless scene (then again, she may have lost integrity by allowing the filmmakers to airbrush her actual breasts). Dave has a similar shock when Mitch’s bachelor lifestyle turns out to be fulfilled by a nine-month-pregnant nympho whose baby, much to Dave’s chagrin, can be seen kicking through her exposed belly (another CGI effect).

As the two men are forced to adopt the other’s daily routines to maintain cover, Bateman and Reynolds capture both distinct personalities with flawless pitch, moving from what would normally be typecast roles for each actor to something very different. Bateman goes from his usual dry-humored self as Dave, to dropping F-bombs every other word after Mitch has taken him over. Reynolds begins in full Van Wilder mode as Mitch, and then quickly turns into a passive-aggressive dork after the switch. Reynolds can often be miscast (see Green Lantern), but his cocky charm and unrelenting potty mouth are perfectly suited to his role as Mitch, whereas being Dave he shows a meeker side by capturing Bateman’s characteristic nuances. Bateman’s transformation into Reynolds’ persona feels more cartoonish, but that goes with the territory, and it’s all the funnier for it.

Mann has a few impressive scenes, breaking down as her husband exhibits behavior more akin to Mitch; these range from hilariously confused to genuinely dramatic. Olivia Wilde takes a major supporting role as Dave’s assistant, who is the target of much cringey sexual harassment as Mitch takes over Dave’s office. Alan Arkin appears as Mitch’s estranged father, who seeks out Dave’s advice on how to talk to his son, never realizing it’s his son who’s giving him the advice. But the talent behind the camera is just as evident as those onscreen. Director David Dobkin (The Wedding Crashers) and his editors Lee Haxall and Greg Hayden make nimble cuts for prime comic timing, one of this film’s best elements. The back-and-forth banter and raunchy jabs between Bateman and Reynolds never cease and almost feel improvised, a sign of both a good script (by The Hangover writers Jon Lucas and Scott Moore) and a strong on-set improvisational rapport between performers.

But beware, audiences should take the R-rating very seriously, more so even than this summer’s The Hangover Part 2 or Horrible Bosses. Although it’s never mean-spirited, unlike some similarly-toned comedies of late, The Change-Up can be exhaustively blue, even repugnant. This is a crowd-pleaser of the grotesque order, feeding so-called commercial cinema bottom-dwellers hearty doses of “adult” language, drug use, sexually explicit situations, and potty humor. For some, this description may be a major deterrent, and no doubt those who think as much will find it childish and tactless. But there’s an audience that will go bananas over such a low-effort comedy, only if they’re in the mood for shock-based and offensive humor. Best of all, unlike most comedies these days, the overplayed trailer barely begins to spoil the film’s best laughs. And so, put aside your reservations toward the lame body-swap premise, which undoubtedly even the filmmakers must know is foolish, and enjoy its two hilarious performances.