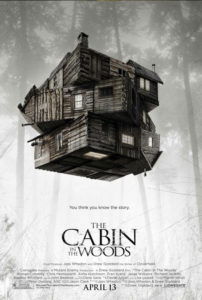 The less you know going into The Cabin in the Woods—a horror movie that transforms the classic mechanics of the genre into actual mechanisms—the better. A self-aware twist on haunted cottage slashers, the movie contains a lot of secrets and oh-what-fun the audience will have discovering them in this funny, shocking, and intriguing arena, conceived by co-writers Joss Whedon and his collaborator Drew Goddard, who also makes his directorial debut. Left on the shelves during MGM’s recent financial troubles, the movie finally arrives in theaters after over two years of mystery and hype, and delivers enough genre-bending ingenuity to earn considerable admiration. Still, writing this review becomes a test of my ability to be vague, yet incorporate enough detail so those who read the review afterward recognize my specific praises and several misgivings, all without spoiling it for everyone else. Rest assured, you can read on without having any major plot points ruined. But then again, if you’ve seen the theatrical trailer for this movie, chances are you’ve already seen too much.

The basic setup is this: Five college friends head out on a weekend getaway to a secluded cabin deep in the Redneck Woods. Dana (Kristen Connolly) is the mousy, quiet girl paired with a  sporty scholar-type boy, Holden (Jesse Williams); the sorority girl Jules (Anna Hutchinson) flirts with everyone but devotes herself to the buff Curt (Chris Hemsworth, who has become a star since this film wrapped, courtesy of Thor); the resident stoner-cum-philosopher Marty (Fran Kranz) fulfills the Jamie Kennedy-from-Scream role. After a creepy encounter with a local at the ramshackle gas station, they quickly get to drinking and having sex, and without fail things go south and the bodies stack up. The cabin becomes a house of clichés borrowed from the likes of The Evil Dead and Friday the 13th. Except, from the outset, we’re also aware of two straight-laced regulators (Richard Jenkins and Bradley Whitford) presiding over a massive panel of advanced buttons and switches, watching the cabin’s activity on cameras and controlling every aspect of its inner workings from their operations room.

Proceeding, then, are two separate but interconnected stories, one involving a zombie-redneck-slasher yarn splattered by clichés, while simultaneously the inspired puppeteer scenes drop breadcrumbs to explain why this presumed stage in the woods has been established and what purpose the deaths of these college students will serve. Subtle clues and crafty dialogue teases us as to the meaning of it all and inspires our imagination, and at the same time a suspenseful series of shocks plays out in the cabin. The cabin scenes are effective because the cast is talented and their characters were made two-dimensional by Whedon and Goddard’s slick writing. It’s all written with an immediate need to know more, but also considerable layers to the conspiracy that’s afoot. The control room scenes are even better, with Jenkins and Whitford eliciting wild laughs in their indifferent remarks.

Always the question remains: What’s the bigger picture? With any movie dependent on a major secret like this, there’s always a chance the answer will be underwhelming. Fortunately, that isn’t the case here. The finale’s twist is satisfying and interesting and leaves us wanting to know more. However, once the kicker’s revealed, all those clues and details from before come into question, and here’s where the audience will see some annoying plot holes. In the end, elaborations made earlier suddenly make no sense to what we now know, and the larger relationship between the puppets and the puppeteers doesn’t follow a consistent set of rules. Indeed, Whedon and Goddard spend so much time having fun and playing with the dynamics and their genres, they forgot to make sure the connective tissue linking them holds together.

This is the kind of movie that falls apart after five minutes of careful discussion and observations once the credits begin to roll. One wishes that the plot details were structured tighter. Even though the movie leaves you buzzing from its creativity within the tired horror genre, once you talk it out, you might even realize that, perhaps, you didn’t enjoy the movie as much as you originally thought. For the duration, the twists and turns along the way are unexpected, but it’s not a movie I would enjoy seeing again. Ironically enough, though the movie is so dependent on the ending and curiosity factor, it’s the ride there that’s the most entertaining part—the humor and the surprises along the way. And what a ride. Goddard has made an exceptionally unique movie that toys with our expectations and uses those tired formulas in new ways. It’s a movie that should be seen and talked about, though it’s not the most sensical of scenarios. But most importantly, it’s novel enough to be innovative and reawaken interest in a genre that’s come to a creative impasse.