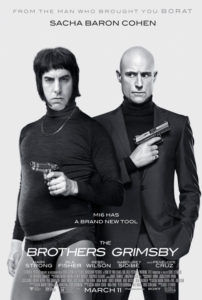 About midway through The Brothers Grimsby, the eponymous characters must hide from pursuing spies in Africa. A heard of elephants grazes in the distance. Fortunately, Sacha Baron Cohen’s dimwitted Nobby Butcher remembers from a nature show that female elephants have expansive uteruses. With his covert agent brother Sebastian (Mark Strong) inexplicably following along, Nobby leads them inside an elephant vagina, where they successfully hide from the bad guys. Once the coast is clear, Nobby begins to make his way out, but before they can clear the elephant’s womb, he notices a string of male elephants lining up to mate with the female. Fortunately, the scene cuts after just two elephants ejaculate with Nobby and Sebastian still inside, covering them in gallons of jet-streamed semen in the face and, in Nobby’s case, in his anus.

This critic asks that you re-read that first paragraph, thinking long and hard (no pun intended) about whether that’s funny to you. Maybe under a different set of comedic circumstances this elephant sex sequence could garner a laugh or the intended bemused gasp. But by this point in The Brothers Grimsby, we’ve already been forced to endure Nobby sucking on the rubbery testicle prosthetic belonging to his brother Sebastian, as well as a number of crude moments involving Rebel Wilson. It’s all pretty shrug-worthy instead of shocking or funny. Even the joyous notion of poking fun at Donald Trump is stymied by the movie’s rather callous jokes about AIDS. With a painfully long runtime of 83 minutes, Baron Cohen’s latest comedy is far removed from Baron Cohen’s social satires with Borat and Bruno.

All of this says nothing of the movie’s illogical name stateside. In the U.K., it’s called Grimsby, describing the shabby seaport town where Nobby and Sebastian Butcher grew up. Calling them the “Brothers Grimsby” is inaccurate, since their surname is Butcher. No matter. The story opens with elite operative Sebastian on a mission for an offshoot of MI6. Sebastian is out to stop the assassination of anti-disease advocate Rhonda George (Penelope Cruz). Separated from his brother as a boy, Nobby learns of Sebastian’s presence in London and rushes out to find him. Sebastian’s mission goes south. Nobby is now rendered inseparable from his brother. Together, with only the help of Sebastian’s tech-saavy analyst (Isla Fischer), they must expose an elaborate conspiracy. Ian MacShane is completely wasted as Sebastian’s boss, who now believes the spy is a villain.

Written by Baron Cohen, Phil Johnston, and Peter Baynham, the movie has much in common with last year’s Kingsman: The Secret Service and Spy, since both attempted to lampoon the spy genre. The former was a fun B-movie, the latter was an uneven spoof, but The Brothers Grimsby is an abortive mess. Not only does the humor fall flat and register as transparently gross-out based, but the plot is so loosely constructed that its only purpose is to propel the bawdy jokes. On the technical side, director Louis Leterrier (Now You See Me, Clash of the Titans) delivers unintelligible action thanks to the sliced and diced chopwork of the four credited editors (!) and their complete disregard for continuity or shot-for-shot logic. Moreover, Leterrier seems to think he’s directing a straightforward actioner instead of a gross-out comedy, so the extremely busy camerawork of lenser Oliver Wood is almost consistently disallowing any chance for sharp comic timing.

There’s no badge of comedic honor to be earned here, since The Brothers Grimsby doesn’t have any kind of real message, except that lower classes matter. A fine message, to be sure, albeit delivered without the satiric edge of Baron Cohen’s earlier characters. You have to wade through gallons of elephant semen and endure ball-sucking to get to any kind of meaning, but it’s there—somewhere between the opening scene where Nobby sticks a firecracker up his bum, to the climactic scene where Nobby puts another firecracker up his bum. Though Baron Cohen used to be a subversive voice in guerilla comedy, with this movie and his last vehicle, 2012’s The Dictator, the comic proves he’s given up on trying to make us think as we laugh. In fact, he may have given up on trying to make us laugh, too, in favor of inciting our gag reflex.