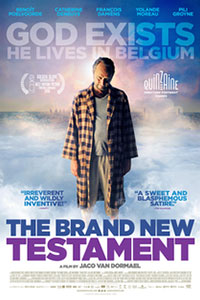 In the whimsical fantasy The Brand New Testament, Jaco van Dormael considers what would happen if you created a personality profile of God. What kind of person do you get when you factor in God’s behavior in the Bible and combine that with his choices on Earth? What kind of personality works in such mysterious ways, as the Christians like to say, by creating hope through beauty, yet also disease, hatred, and war? What you get is something like Benoît Poelvoord’s bored and abusive portrait of the Almighty. Loafing around in a robe and hunching over his computer that allows him to control the fate of the universe, God slings insults at his family and delights in torturing his earthly creations with minor annoyances. He writes a series of laws, such as “Law 2128: The other line always moves faster.” He’s a petty asshole, this God. He lights houses on fire, causes planes to crash, and compels deadly storms just to keep himself from getting bored. The Belgian writer-director van Dormael imagines the psychology of God as the abusive paterfamilias of a dysfunctional family. God has berated his wife (Yolande Moreau) into muttering silence, contained his son in the form of a statue, while his young daughter, Ea (Pili Groyne), decides to rebel. It’s the type of conceptual comedy that, not unlike Monty Python’s Life of Brian (1979) or Dogma (1999), inspires with its religious satire.

The 2015 film opens with Ea’s narration, explaining that her father, God, created Brussels first. With that, The Brand New Testament shows an alternative Genesis, complete with an Adam (Lost in Paris’ pantomime extraordinaire, Dominique Abel) who wanders around the city with a censored box of shame covering his man parts, and later he tries to figure out the first sex act ever with Eve (Lola Pauwels). Ea also details her plot to usurp her father, who spends his days snickering over his ‘80s-grade computer and finding new ways to entertain himself by torturing the human race. When he’s not in his locked office with file cabinet walls (an image evoking the UK poster of Brazil), she sneaks inside and sends everyone on Earth a text message with their date of death, represented by a digital countdown clock. All at once, every living person knows when they’re going to die. The implications are vast: It means there’s an immovable plan, thus no reason to fear an immediate death. If everyone’s fates have been written, there’s no need to pray for protection or worry about being punished for your sins. By putting an end to the predestination versus free will debate, Ea has liberated humanity and plotted an exodus for herself. 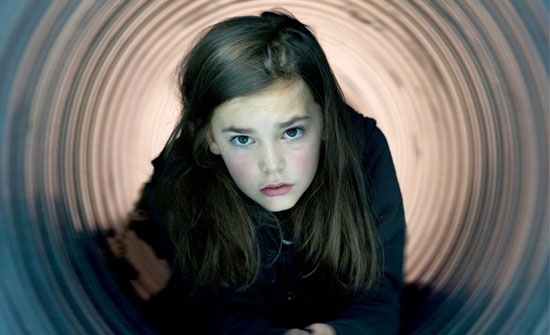 From this conceptual launchpad, van Dormael finds dozens of comic possibilities and combines them with his rich, subversive visual imagination. From the start, it’s evident that his style isn’t interested in a precise set of comic tools; he wants to use every tool in the box. When Ea describes her plan at first, the lights lower like a stage play, and Ea, under a spotlight, addresses the camera to announce her scheme to locate six apostles for herself (combined with her brother’s 12, they’ll have 18, enough for a baseball team, the favorite sport of her mother). But The Brand New Testament is also very cinematic, seeing the world through the eyes of a director. When van Dormael recounts the history of the world, he does so in a faux-silent film style, complete with black-and-white footage and intertitles. When he wants to emphasize the absurd, he shows chickens in a movie theater. When he wants to be profound, his characters test the constraints of cinema by breaking the fourth wall or simply look into the camera for an intimate stare. There’s also a clever moment of Brechtian form where he uses a split-diopter lens, which is often used in stationary shots to draw a focused parallel between a foreground subject and a background subject, and he pans right instead, leaving everything on the left three-fifths of the screen out of focus.

The story’s second act follows Ea as she sets about finding her six apostles. Like her more famous brother, she can perform miracles—she listens to a person’s “inner music,” a talent like palm reading, which tells you if your soul aligns with Bach or Trent Reznor, and she uses this talent to convince others that she’s the real thing. She’s accompanied only by Victor (Marco Lorenzini), her homeless scribe, who looks suspiciously like Michel Simon from Boudu Saved from Drowning (1932). This episodic second act consists of introductions for her disciples, who are less devout followers than plain people affected by Ea’s disclosure: After learning his years are limited, Marc (Serge Larivièr) resolves to spend his last days in Brussels’ red-light district; he eventually finds a woman who speaks in unintentional word plays, such as “my heart beats like a crumb” or “she was the love of his wife.” Another one, François (François Damiens), works as an assassin and justifies random killings because, as everyone now knows, our death will arrive no sooner than its preordained date. There’s another apostle who quits his dead-end office job to follow a flock of birds, and another who’s a young boy with just 54 days left on his clock, time that he uses to transition into a girl. In some ways, the best and worst of them involves Martine (Catherine Deneuve), a bored wife who falls in love with a gorilla—performed by an unconvincing guy-in-a-gorilla suit. Deneuve hasn’t been in such strange company since Jacques Demy’s Donkey Skin (1971).

To be sure, van Dormael delights in surreal images—such as a tiger in a hotel room or an ostrich wandering around a grocery store. The Brand New Testament is filled with oddball moments, some of them random asides, some of them crafted to incite existential contemplation. The tone feels like Charlie Kaufman by way of Jean-Pierre Jeunet, the French director whose cutesy style in The City of Lost Children (1995) and Amélie (2001), once so popular, feels almost unbearable today. Fortunately, the film’s Kaufmanesque flourishes bear surreal fruit. Consider how Ea and God must make their way to Earth not by descending on a staircase from Heaven; rather, they must enter their apartment’s washing machine and crawl through a narrow pipe before emerging into a Brussels laundromat. The touch recalls Kaufman’s script for Being John Malkovich (1999), and how occupants of Malkovich’s mind would enter through a curious hole and eventually be spit out onto the New Jersey turnpike. Elsewhere, the filmmaker’s depiction of God as an insufferable jerk continues to provide laughs. After he follows Ea to the mortal realm, he finds himself infuriated by human limitations. And, as it turns out, God budges in line. 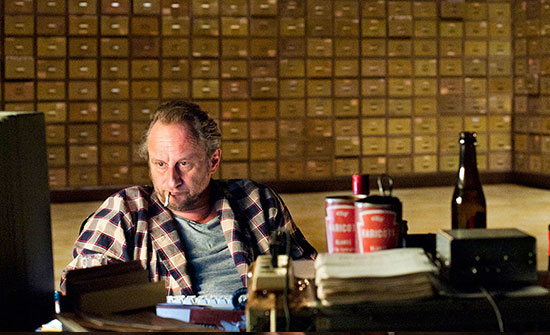 It’s all very silly, and no wonder—van Dormael performed as a circus clown before becoming a short filmmaker in the 1980s. His early shorts, many of them award winners, gave way to his debut feature in 1991, Toto the Hero, about a man convinced he was switched at birth. He earned the Camera d’Or at Cannes, the award for best first film, and went on to deliver a new feature with several years, sometimes more, in-between projects. After his second film, The Eighth Day, a sickly sweet story about a hardened executive whose heart melts when he meets a coworker with Down Syndrome, he took 12 years before returning to the screen. Maybe he just needed to gain some perspective after his wildly popular debut. After all, with each new effort, van Dormael considers the world from a bemused perspective. His characters frequently step back and look at their lives from a distance, like his protagonist in Mr. Nobody (2009), the last mortal man in a future of perpetual life, who looks back on his 118 years on the planet. The Brand New Testament does something similar by considering, albeit through the guise of a comic conceit, the factors that shape our behavior: our fear of holy retribution; our love of (a cruel) God; and our blind faith that, if there’s a grand design, there’s a worthy reason for it.

If the satire on religion feels lighter than it is, then perhaps van Dormael’s penchant for fanciful imagery and humor dampens the concept. In a two-hour film, the filmmaker has injected about 30 minutes of random asides that feel like deviations, some funnier than others. I smiled when one man shared his views on Jean-Claude Van Damme, claiming “you’ve seen nothing” of cinema if you haven’t seen Double Impact. But the film needlessly visualizes every simile in cutaways. When Ea describes one of her apostles as having a laugh “like pearls falling downstairs,” the film shows us that very image. Someone else has a voice “like 30 guys cracking walnuts,” the film cuts to the image of men in plaid flannel shirts working on a pile of nuts. It’s a device that becomes tiresome and predictable. Other images seem to embrace surrealism for surrealism’s sake, such as when a woman watches a hand—think Thing from The Addams Family—perform a ballet to Handel (Get it? Hand. Handel.). Then there’s the ghost fish who sings Charles Trenet’s “La Mer,” a song as overused in French cinema as Frank Sinatra is in Hollywood films. The film’s humor is at its best when it serves the story, such as a subplot about a daredevil who keeps leaping from tall structures (a building, a bridge, a plane) without a safety net, knowing he cannot die because his death date is years in the future. Isn’t he worried about landing himself in a coma for the rest of his life?

The Brand New Testament has boundless energy and imagination, and its charming concept makes enduring some of the film’s more random, unstructured ideas worthwhile. Van Dormael delights in exploring his concept to its limit, and the viewer gets the sense of the artist paying close attention to every inch of the canvas without looking at the overall painting. Still, there’s something wonderfully Gilliam-esque at work here, as van Dormael uses a final mistake, reminiscent of the bug that switched Tuttle to Buttle in Brazil, to imagine how much more pleasant the world would be if a woman created it: a patterned sky, pregnant men, and a lack of international conflict. The Brand New Testament questions how a patriarchal religion has shaped our society, and how its inherent maleness has influenced the lives of those who follow God the Father. It’s an idea that brings to mind a speech in this year’s Marriage Story, where Laura Dern’s divorce attorney considers the implications of how we accept God as Christ’s deadbeat dad: “God is the father, and God didn’t show up.” Van Dormael seems to find great pleasure in questioning why people continue to value such a figure, while he also delights in showing an earthbound God trapped in the “shitty” world he created.

(Editor’s Note: This review was suggested and commissioned on Patreon. Thanks for your support, Martha!)