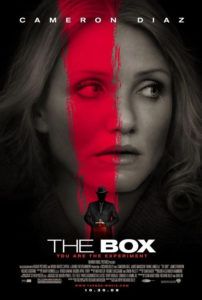 Richard Kelly’s The Box spins a suspenseful yarn that’s enigmatic as it is entertaining. The film derives its basic structure from Richard Matheson’s short story Button, Button. Matheson’s text, which was adapted into an episode of the ‘80s version of The Twilight Zone, told of a mysterious man who visits a suburban home and offers a married couple a deal: He gives them a box, and if they push the button on top of it, they’ll receive a tax-free payment of one million dollars, but someone they do not know will die. Matheson wrote the ending so that the husband died, because the wife didn’t really know him at all. However, the television adaptation left the mysterious man taking the box to another couple whom the first couple doesn’t know, meaning the first couple would die when the button was pushed again. Kelly concocts something different than both of these endings, and instead invents something more complicated, though decidedly more involving.

Set in 1976, Kelly’s film opens with a package being left on the doorstep at the home of Norma (Cameron Diaz) and Arthur Lewis (James Marsden), a happy, average American couple. Inside, there’s a wooden box on the top of which is a red button inside a small glass dome. The package also bears a note that says Arlington Steward will return at 5 p.m. that evening. Mr. Steward is played with considerably menacing politeness by Frank Langella, his deep voice lending shivers. His character is marked by a grotesque scar on the left side of his face. When he returns, he offers the couple a million in cash with the contingency that someone they do not know will die. They have 24-hours to make up their minds, at which point he will reprogram the box and make the offer to someone else.

Norma and Arthur have your average money troubles. She’s a schoolteacher and he works for NASA, having designed the camera on the Viking Mars probe. But Norma learns she’s losing a discount through her job, and Arthur finds he failed the psych portion of his astronaut entrance exam, which he aced otherwise. But they’re now living paycheck-to-paycheck, so these blows will topple them financially. Suddenly the offer of a cool million sounds irresistible, and the button is pushed. Being good people, they immediately regret their impulse and try to give the money back, but Mr. Steward won’t take it. They instead decide to investigate Mr. Steward and the origin of the box, finding innumerable connections and coincidences that make up this circular, spellbinding film.

To explain any more of the plot would be criminal. Kelly makes wonderful use of ambiguity in the film, just as he did with his debut, Donnie Darko (just forget that he directed Southland Tales). He keeps the audience feeling that we’re always on the cusp of discovering the last piece of the puzzle, but he never gives us all of the pieces. In a way, that’s incredibly frustrating. In another way, it’s an ingenious move on his part. Kelly intrigues by giving us just enough information to feel satisfied with his conclusion, and just enough mystery to keep talking long after the credits roll. Kelly’s choices may limit the scope of his audience, but for a select few, he’s tapped into an absorbing realm of sci-fi storytelling.

So why only three stars? Why not three-and-a-half or four? Specifically, because Kelly goes out of his way to make the experience ambiguous by incorporating scenes and imagery that seem to exist without explanation, intentionally and at times obviously so. There’s much we have to ignore or apologize for to appreciate what Kelly is trying to do. And then there’s Cameron Diaz, who is grossly miscast. Though she doesn’t stand out in her scenes, she doesn’t completely disappear. Her southern accent is phony, and Kelly would have been better off finding an actress more familiar with the thriller genre. But Kelly makes up for these missteps with a stylish, admirable production.

This is a technically impressive film. Kelly incorporates lighting filters to make his presentation seem soft and washed by time, and his computerized special effects, though at times iffy, appear more real because of his flattened color scheme. The effect to make Langella’s scarred face, for example, is flawless. Kelly also captures some genuinely creepy, hypnotic moments. Consider when Arthur is followed in the library or the peculiar waiter at the wedding party. They’re all augmented by the Hitchcockian music composed by members of The Arcade Fire; it feels like a Bernard Herrmann score with comparable grave pangs and winding tones. It’s brilliant music.

Approach The Box the way you would Knowing, another sci-fi thriller from this year. Both films have plenty of ideas, but they require that you take a leap of faith to fully appreciate what they’re saying and how they’re saying it. They’re both high-concept pictures, and they both call for a preexisting appreciation of the science fiction genre. But for the right audience, these are entertaining, well-made stories that inspire conversation and debate. They play as though their filmmakers took the time to bring an episode of The Twilight Zone or The Outer Limits to full cinematic life, and if that sounds like your cup of tea, then you won’t be disappointed. Those with an aversion to all things a little out there, stay home.