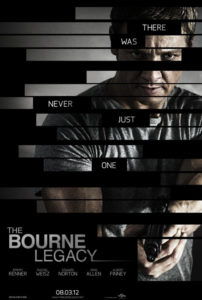 Although not based on a Robert Ludlum novel, nor even one by Eric Van Lustbader, The Bourne Legacy, the fourth entry in the Bourne series, plays like one of the author’s involved spy yarns, and therefore it’s oddly set apart from the actionized Jason Bourne Trilogy whose source novels were decidedly less diverting on the printed page. The story, penned by the franchise’s resident screenwriter Tony Gilroy and his brother Dan, brings a pot-boiler intensity that gradually builds toward the finale’s superb chase sequences and hand-to-hand combat we’ve been accustomed to in this franchise thus far, rather than just leaping into the action headlong from the start. Moreover, Matt Damon’s titular character is nowhere to be found here, title notwithstanding. Gilroy’s most surprising departure is using name-brand recognition to sell tickets to a film that doesn’t feature Jason Bourne at all, but it does just fine without him nonetheless.

Gilroy, who directs here as well, carries over a familiar structure from the trilogy to make audiences feel right at home despite Damon’s absence. We follow yet another betrayed engineered super-spy—this one named Aaron Cross, played by Jeremy Renner—as he runs for his life and seeks answers, while the agency who created him, seemingly even more clandestine than the CIA, operates beyond any reasonable guidelines to clean up their mistake. The hero teams with another female-sidekick-cum-romantic-interest, and together they hop the globe, while the intelligence goons try to gain ground from a control room buzzing with technical jargon, computer monitors, and security camera footage. Eventually, the agency activates another lone assassin from yet another super-spy project to kill the hero. Of course, that’s the basic outline of each Bourne film, but Gilroy’s mark resides in the buildup he’s added to the material this time around.

So why is there a “Bourne” in the title then, aside from Hollywood’s obvious need to keep bankable franchises alive by whatever means necessary? This one begins with an overlap from the events in The Bourne Ultimatum, expanding and giving us the “bigger picture” of how Bourne’s actions in the trilogy affected the greater spy community. Specifically, there was another super-spy engineering initiative called “Operation: Outcome,” whose overseers opted to terminate their project to avoid the press digging up any links to “Treadstone.” Agency figurehead Eric Byer (Edward Norton) orders all Outcome ties be cut—from the soldiers they created to the researchers who helped reengineer them. Genetic scientist Dr. Marta Shearing (Rachel Weisz) narrowly survives when her coworker, no doubt chemically inclined to do so by The Powers That Be, kills everyone in her lab. Likewise, super-spy Cross is on an Alaskan training course when a flying drone comes to eradicate him. Fortunately, Cross wrestles a wolf to the ground to confuse the drone’s infrared trackers.

Much about this scenario doesn’t work as well as in the initial Bourne movies, as everyone’s objectives seem too one-note. Consider the opposition, whose goal is no more complicated than cleaning up their mess. And how do they do it? By repeating a mistake, they’ve made in every film in this series—sending a sole assassin to kill another. Norton can deliver lines like “We are morally indefensible and absolutely necessary” to convince us of his villainous status against our comparatively moral hero, but is there nothing more to him than simply covering his tracks? Or consider Cross’ motivations. He’s a soldier whose chemically-enhanced physical superiority has been ingrained into his DNA, but his super-intelligence still needs a little blue pill to maintain. If he doesn’t get another dose, or permanently “viral out,” Cross will revert to his former dim-witted self. To prevent this, Cross seeks out Shearing, and together they run against the clock of Cross’ returning stupidity.

Weisz, who’s always compelling no matter the role, provides the film’s human center, her otherwise lab-bound character panicky and ill-equipped to handle attempts on her life, while the actress displays far more range than her female equivalents from the trilogy (Franka Potente, Julia Stiles). Opposite, Renner injects some subtle personality into Cross’ cold spy, but mostly he’s a blank action hero with an underexplored backstory. We know less about Aaron Cross than we do about Renner’s similar, albeit supporting character from Mission: Impossible – Ghost Protocol, and just about the same amount as his undersized role as Hawkeye in The Avengers. There’s not much romantic chemistry between these two actors, and yet we’re invested in their survival because Gilroy spends so much screen time developing the stakes of his film, thin as the characters may be. They’re pleasant enough characters played by high-caliber actors, and that’s why they work.

As with Gilroy’s other directorial efforts, Michael Clayton and Duplicity, the dialogue in The Bourne Legacy is clever, the pacing measured, and the plotting seemingly complicated but, in fact, quite simple. It’s also a good-looking picture, thanks to cinematographer Robert Elswit. Those who were put off by director Paul Greengrass’ reliance on Shaky-Cam tactics in the second and third Bourne movies will find coherent and exciting action scenes here, and coherent editing to boot. The majority of the action takes place during the film’s last third, including a fantastic rooftop-to-motorcycle chase in Manila, which suspiciously mirrors a motorcycle-to-rooftop sequence in The Bourne Ultimatum. Other locales include Seoul, Alaska, Chicago, and New York. By finishing the film with a fast-paced conclusion, it ends with a bang; and clocking in at two hours and fifteen minutes (the longest in the franchise), it breezes by. But when it’s all over, and we reflect on what was accomplished in The Bourne Legacy within the larger Bourne mythos, it’s clear this entry is a superfluous, if very entertaining ride.