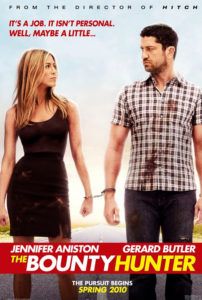 When asked why the romantic comedy is dead, or at least clinging on for dear life, I remind people of movies like The Bounty Hunter. For every great romantic comedy that comes out each year—and there aren’t many—there are a dozen of these by-the-numbers releases that offer nothing new. But more than offering nothing new, they offer the same old formulaic devices and refuse to even try to present them in an innovative way. Here’s an actionized rom-com that isn’t action-packed, contains no believable romance, and isn’t particularly funny. Instead, the action is sleepy, the humor is middling, and the romance deserves eye-rolls.

When you find out that the movie was directed by Andy Tennant, of Hitch and Fool’s Gold infamy, that should be enough to dissuade you from attending. And if that makes you interested, well, then you’re part of the problem. Tennant’s action scenes feel like those in Kevin Smith’s Cop Out, boring and uninteresting. Gunshots are fired because they’re supposed to be; cars are crashed with a shrug. Stars Jennifer Aniston and Gerard Butler signed onto typecast roles, for which they were paid a hearty sum, and present performances that never for an instant step outside of their established comfort zones. There’s almost no chemistry between them, and the ho-hum plot doesn’t help to distract us from the lack of energy onscreen.

Ex-married couple Nicole (Aniston) and Milo (Butler) don’t talk anymore. They were married three years ago and their union lasted less than a year. Now they’re bitter about it. So Milo, an ex-cop who’s now a bounty hunter, finds joy in the idea of tracking down his reporter ex-wife. While on bail for a minor altercation with police, she skipped a court hearing to investigate a breakout news story, and so now she’s a fugitive. But while tracking her down, Milo gets sucked into her investigation which involves a faked suicide, drug money, corrupt cops, and gambling debts. The bounty serves as a “meet cute” device, the story apparatus that brings two people who hate each other together, until they realize that they really love each other, that is.

Butler seems to always be chewing or smacking his lips and Aniston can’t stop playing with her hair. These visibly bored actors are both riding on their popularity in these roles, with Butler somehow still coasting from 300 and Aniston barely shy of her role on Friends. Someday we’ll stop thanking Aniston for her actual performance in The Good Girl and demand some real acting from her; until that day, she’s serviceable. Butler, meanwhile, still has to prove himself with a great performance. He’s fallen into a trap of only two types of roles: the toughguy (see Gamer), and the rugged romantic interest in bad rom-coms (see P.S. I Love You or The Ugly Truth). If only he made more movies like RockNRolla. But the actors here are just another component of a movie arranged because the formula makes money, no matter how lazily that formula is arranged.

Take the soundtrack, which is comprised of nothing except the worst kind of pop tunes and cliché hits from about five years ago. The song selections have lyrics that in almost every case mirror what’s happening onscreen. When Sean Kingston’s “Fire Burning” plays, you better believe there’s a fire burning in the movie. During a thumping remix of “Stayin Alive” by The Bee Gees, you can bet that someone is indeed trying to stay alive. The songs in the movie seem to be a last ditch effort to appeal to modern audiences, except not one matches the tone of the movie. Then again, what song could match the unfunny rom-com stylings of this painful dribble? Maybe if they turned down the movie’s audio tracks and replaced them with layers of white noise, the result could be viewed as an avant-garde piece about the death of the romantic comedy.

Filled with detestable patchwork that brings together familiar pieces of this and that movie you’ve already seen, there’s no reason to bother with The Bounty Hunter. The result seems to have aimed toward something like a modern version of The Thin Man, with bantering (ex)spouses engaging in perilous sleuthing. But this movie lacks versatile stars, humorous banter, an interesting mystery, or any of the qualities needed to make it work. At every turn, it feels artificial, which is sadly becoming the norm with today’s romantic comedies.