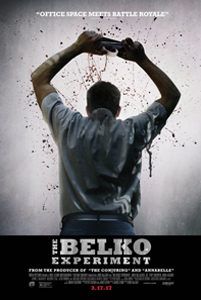 Somewhere between Office Space and Battle Royale, the scenario of The Belko Experiment turns a corporate setting into a gladiatorial bloodbath. The employees of Belko Industries think someone’s playing a prank when a voice on the intercom makes a horrific announcement: “There are currently eighty of you in the building. In two hours, we want thirty of you dead.” But it’s not a joke, as evidenced by the metal shutters that prevent escape from the building’s windows and doors. Worse, small bombs have been implanted into the heads of the American employees—according to the mysterious Columbian non-profit corporation, they were meant as trackers in the case of a kidnapping. After a few coworkers suddenly drop dead from an internal cranial explosion, the announcement’s threat that almost everyone will die in eight hours if employees refuse to comply incites office warfare.

A low-budget, dark-humored gorefest, The Belko Experiment comes from Greg McLean, the Australian director best known for the torture porn title Wolf Creek (2005). His more recent fare includes the killer croc movie Rogue (2007) and last year’s silly haunter The Darkness. Calling his latest the best work of his career isn’t a stretch. The production values are higher, the script is tighter, and it’s certainly populated by his most eclectic and talented group of character actors to date. Among many other recognizable faces are John Gallagher Jr. (The Newsroom, 10 Cloverfield Lane), Tony Goldwyn (Ghost), Adria Arjona (True Detective), John C. McGinley (Scrubs), Josh Brener (Silicon Valley), and Brent Sexton (The Killing)

If being a bureaucratic cog surrounded by cold cubicle walls and passive aggressive office politics wasn’t enough to drive you mad, being trapped, frightened, and having your safety threatened will usually do the trick. In fiction and life, these situations bring out the worst in people. Horror stories from the Superdome following Hurricane Katrina still seem unbelievably grotesque, while Stephen King has thoroughly explored this idea in The Mist and Under the Dome. The plot of The Belko Experiment feels a lot like that, where hysteria takes over and sides form, with some people capable of retaining their humanity and other reduced to a lizard-brain. At the center is a systems guy, Mike (Gallagher Jr.), who, along with his office sweetheart (Arjona), faces off against the resident psychopath-executive, Barry (Goldwyn), and his band of boy’s club followers. As the intercom voice issues instructions on the ensuing “game” and its live-or-die stakes, Barry takes little time worrying about the moral implications of murder for survival.

James Gunn penned the screenplay and, given his track record, his unpredictability and gorily brutal sense of humor seem well intact here. After all, Gunn began his career working for Troma Entertainment, writing titles like Tromeo and Juliet (complete with a mutated cow-faced heroine who’s equipped with a monster-faced phallus). Later, he stepped up to B-movies such as the hilarious space-slug yuckfest Slither (2006) or the bloodily hilarious homemade hero comedy Super (2011). Recently, he’s been the main creative force behind and director of Marvel’s Guardians of the Galaxy franchise. Going from fringe cult material to a major blockbuster filmmaker, you would think Gunn’s voice would soften over time. And yet, he remains the kind of writer willing to treat a bloody death like a punchline.

The tone is reminiscent of Joss Whedon and Drew Goddard’s treatment on The Cabin in the Woods, where characters followed throughout the story meet an unceremonious demise with variations of shock and laughter. Heads are caved-in and people hacked to death, but the film juxtaposes such horrifying scenes with a soundtrack of Spanish-language covers of ironically placed songs, like “California Dreamin’” by The Mamas & The Papas. Elsewhere, Gunn, who also produced, includes his brother Sean Gunn (perhaps best known as Kirk from Gilmore Girls) as a zonked pothead who hilariously believes the entire scenarios is a hallucination brought on by chemicals in the water, man. Other Gunn favorites, Michael Rooker and Gregg Henry, also appear in all-too-brief roles.

Whereas the aforementioned King stories used their potboiler scenarios to provide commentaries on the depths of human depravity, the purpose of The Belko Experiment, beyond supplying B-movie fun, remains elusive if entirely nonexistent. If there’s an intended discussion about the savagery of office politics or the loss of one’s humanity by blindly following orders, then the commentary has been buried by the film’s gleeful cruelty. Though he’s not known for his humor, McClean allows the humor of Gunn’s script to relieve, albeit briefly, the tense situation, but laughs and some escapist thrills are all the film has to offer. Not that it needs anything more thoughtful behind it; despite the open-ended conclusion, The Belko Experiment will entertain in the realm of its cult demographic.