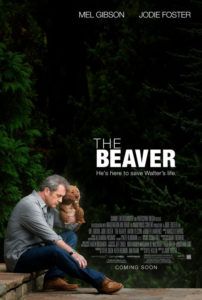 A Cockney narrator tells us the guy floating on a raft in his pool, his arms spread out like Christ, is Walter Black, a man who has lost touch with his family and toy company because he suffers from mental illness. The narrator’s voice also happens to be that of “The Beaver”, a hand puppet which Walter finds in a dumpster after being kicked out by his wife, and uses as a filter to shield himself from the outside world. Rather than exploit the unusual comic farce hidden somewhere inside the concept of Kyle Killen’s script for The Beaver, director and costar Jodie Foster delivers a bittersweet drama about a man’s depression cured via hand-puppet. But Foster eschews anything resembling a humorist approach, despite the obviously absurd setup.

For the protagonist role, Foster takes a major risk by casting Mel Gibson, whose ongoing struggles with alcoholism supply more than one art-imitates-life moment in the film. As a result, some viewers may have trouble losing themselves in the story, if only because Gibson’s outbursts have become tabloid fodder and the similarities here are too close to ignore. Take Gibson’s controversial religious background, which provides an odd moment as Walter is shown performing self-flagellation. But even if viewers can see beyond Gibson’s offscreen exploits and appreciate his unsparing performance, as they may have done with last year’s Edge of Darkness, there’s still Foster’s achingly serious tone to endure.

With no attempt to deliver a believable ventriloquist act, Walter talks in The Beaver’s Cockney accent and doesn’t disguise his mouth. He approaches his family, puppet on hand, and his wife Meredith (Foster) and their youngest son Henry (Riley Thomas Stewart) believe that this therapy will help. Their other son, angst-ridden teenager Porter (Anton Yelchin), despises his father and wants nothing to do with his recuperation, no matter how charming The Beaver. Walter begins to take hold on his life once more, reestablishing his toy company by pushing a “home wood-carving kit” for children—an unrealistically hot seller that reaffirms his workforce’s confidence in their CEO. And even though Walter has become more attentive at home, wearing a puppet on his hand makes for awkward scenes in the bedroom, and soon Meredith begins to wonder if Walter can ever be Walter sans puppet.

Midway through, Walter takes a back seat in his own story as Porter’s troubles come forward. An outsider at school, Porter runs a business writing school papers for his peers. He’s asked by valedictorian Norah (Jennifer Lawrence) to write her graduation speech for a $500 fee, but finds himself falling for her in the process. Meanwhile, Walter’s internal issues are overlooked and the whole story feels cluttered and misdirected. Before you know it, a happy ending arrives, but there are still many unanswered questions about Walter and what brought him to the point of needing a puppet to communicate to his family. With little frame of reference, Walter’s troubles remain confusing until the end, despite Gibson’s convincing performance as an emotional wreck. Certainly the performances all around are impressive, but none of them helps bring about a sense of understanding or satisfaction when it’s all over.

Foster does her audience an injustice by adopting a humorless tone and refusing to have more fun with the obvious elephant in the room. Consider how much more successful The Beaver would have been if Foster had pursued a humorous dynamic more akin to Craig Gillespie’s similar dramedy Lars and the Real Girl, about a lonely man who believes a mannequin is his girlfriend. By not allowing her audience to work through Walter’s problems from the inside-out, with an appropriate amount of uncomfortable laughs, we are in turn kept on the outside of what might’ve been an affecting story. But even then, there’s still a segment of the audience that would avoid this film because of Gibson’s presence. In all, a series of risky decisions on Foster’s part deliver in a corresponding series of misfires, resulting in some kind of peculiar thing that never quite works the way it should.