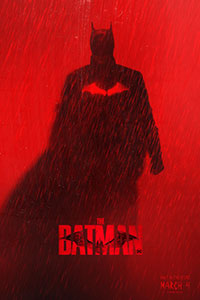 A superb crime thriller wearing the mask of a superhero film, The Batman feels more like a genre experiment than another in a long series of Batman blockbusters. Matt Reeves takes the mantle of director and crafts an even grittier and moodier treatment of the Caped Crusader than Christopher Nolan’s Dark Knight trilogy. Although both iterations represent an uncompromising revision of the iconic DC Comics character, Nolan’s films were driven by theme, whereas Reeves devises a methodical detective story propelled by plot and genre. The Batman has elements of traditional superhero films, of course, but it occupies the territory of a serial killer procedural and crime saga about institutional corruption. Reeves seems to have modeled Gotham City on the nameless sprawl in David Fincher’s Se7en (1995), complete with a relentless downpour, a series of grim murders, and more officials on the take than in a Sidney Lumet film. Batman, played with dour inwardness by Robert Pattinson, becomes the screen’s first version of his oft-used moniker, the World’s Greatest Detective. And the masked investigator inhabits an elaborate superhero noir over the film’s imposing three-hour runtime, propelled by an engaging mystery, red herrings, and unexpected twists. The major difference is this detective just happens to be wearing a cape and cowl.

Pattinson is a younger version of the character than many previous movies have explored (save for Nolan’s Batman Begins in 2005), playing the hero in his second year cleaning up Gotham City’s streets. In his periodic voiceover, Batman broods over his vigilante “experiment” like a disenchanted cop in a film noir. “Hidden in the crowd is the element, waiting to strike,” he growls low. Batman, known to some as “Vengeance,” has instilled a fear of shadows in the crime-ridden city so that petty thugs think twice before hiding in the dark. “I am the shadows,” he insists. When faced with a violent gang in familiar face paint, he emerges from the blackness and engages them in brutal hand-to-hand combat, recalling the crowd fights in the Batman Arkham video games. The villains, too, feel influenced by those games. In the opening sequence, the Riddler (Paul Dano) appears in a homemade, military green costume and brutally murders the film’s first victim, leaving clues that prompt Lt. Gordon (Jeffrey Wright) to enlist Gotham’s mysterious hero—in part because Riddler addresses his clues “to the Batman.” Later, Riddler will attach deathly devices to his victims that appear only slightly less sadistic than the Jigsaw killer from the Saw franchise. Within the first scenes, the murder and investigation signal The Batman as a radical shift in tone and style from previous versions. 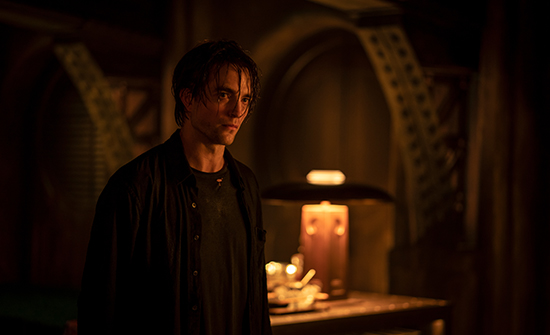 Reeves has made a Hollywood career on his revisions to established intellectual property. Among his best work, he delivered a respectable 2010 remake of the Swedish vampire film Let the Right One In (2008), along with the last two entries in the revised Planet of the Apes franchise. He’s a skilled journeyman filmmaker, capable of adjusting his aesthetic to service the material with competence and coherence. For The Batman, Reeves and production designer James Chinlund blend the old and new to create Gotham City. With footage captured in Glasgow, Liverpool, and Chicago, the city is a place of cobblestone streets and perpetual rainfall, accenting the look of a futuristic dystopia reminiscent of Blade Runner (1982). Michael Giacchino’s music, informed by the two prominent aural themes of Schubert’s “Ave Maria” and Nirvana’s “Something in the Way,” underscore the pervading grave temperament. It’s an utterly serious movie, signaled by Pattinson, who only has a few scenes as Bruce Wayne—and they’re underneath his long hair that often falls and frames his face like a trust fund Kurt Cobain. Gone are those typical scenes where Wayne clumsily passes himself off as a witless billionaire-playboy. Instead, Reeves eschews any comic relief, setting down every plot-driven scene like another piece of the puzzle, making for an entrenched three-hour mystery.

The story’s particulars gradually reveal a thoughtfully conceived world that introduces characters as functions of the ongoing investigation. A murder victim leads Batman to a nightclub, where he meets Penguin (Colin Farrell), a mid-level thug employed by crime boss Carmine Falcone (John Turturro), and corners him for information. There, he spies Selina Kyle (Zoë Kravitz) working as a server with a hidden agenda; however, it’s not the alter-ego of a cat burglar named Catwoman, but an independent social justice warrior determined to take down the underhanded white patriarchy that killed her friend. Batman enlists her help, and instead of asking her to wear a wire, she puts in contact lenses that double as a camera linked to his computer. As for the Batcave, it’s not a cave beneath Wayne Manor but an abandoned subway station where Batman obsesses over Selina’s footage, pours over clues, and strikes the pose of an emo icon (if people had a problem with Sam Raimi’s Gothification of Peter Parker in 2007’s Spider-Man 3, the similar hair and attitude here seem more appropriate, but no less distracting as a type). As our heroes follow Riddler’s trail, the villain’s references to “rats” and “lies” in his cryptic messages hint at a vast network of bought-and-paid-for politicians and cops in Gotham’s elite.

Pattinson’s Bruce Wayne is a severe character, logging his inner thoughts in handwritten journals like one of Paul Schrader’s disturbed loners from Taxi Driver (1976) or First Reformed (2017). “The city’s eating itself,” he observes, disgusted by, yet determined to prevent, Gotham’s autocannibalism. It’s a detail that Reeves uses to acknowledge the thin line between vigilantism and criminality, creating parallels between Batman and the Riddler. Both characters were orphans, seek vengeance and justice, and keep obsessive journals. Yet in Riddler’s case, a scene in his notebook-lined apartment brings to mind John Doe’s fanatical scrawling from Se7en—in a takes-you-out-of-the-movie reference to other material when Gordon reads Riddler’s writings aloud. Moreover, Reeves explores how Riddler identifies with Batman in fascinating, morally complex ways. He sees himself as a vigilante determined to rid Gotham of its corrupt officials and police, to expose secrets that will “tear the whole city apart.” While mining these similarities between hero and villain, the director’s clever screenplay, co-written by Peter Craig, also plays with the details of Bruce Wayne’s past—what Riddler knows and what he doesn’t. The film’s most intense scene finds Batman facing Riddler in Arkham Asylum, confronted by these similarities and left to question his motivations.

Batman is a decidedly American superhero, and Reeves raises all manner of questions about what that means today. Batman has always had the same appeal as a Wild West outlaw or Don Vito Corleone in The Godfather (1972), in that the character’s self-appointed power and resources allow him to exact justice where he sees fit, where the average person cannot. But Bruce Wayne is also a member of the white patriarchy that has corrupted official systems, leaving everyday people to feel powerless against them, thus facilitating the need for someone like Batman. Reeves and Craig weave these ideas into their screenplay with less emphasis on their thematic import than Nolan’s trilogy supplied, but with more substance than other versions of Batman. Part of what makes The Batman so compelling is how the character realizes that “Vengeance” isn’t what the world needs; it’s the hope of a better future—an ironic light in the darkness (a notion beautifully and symbolically rendered late in the film). While the themes resonate, Reeves isn’t subtle about his symbolism, in part because Riddler isn’t subtle. Still, the city’s long-in-development plans to rebuild under a broken organization called Renewal, and what Renewal represents in the murder plot, and to Bruce Wayne, materializes in an organic way that reveals The Batman’s script to be a well-constructed piece of writing. 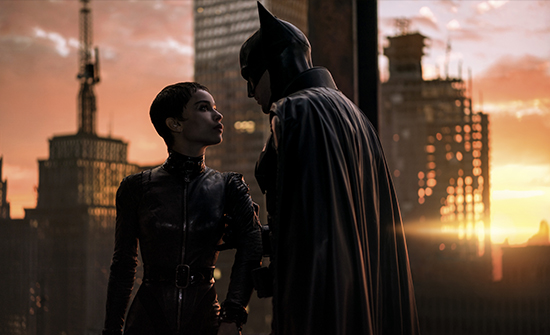 Playing the seventh iteration of Batman onscreen, not counting animated features, Pattinson looks convincing in his functional, mobile costume. The few times Pattinson appears out of costume, he’s with Alfred (Andy Serkis), who helps Batman decipher Riddler’s puzzles and offers an underdeveloped father-figure role. Unfortunately, most of the characters in The Batman feel overshadowed by Reeves’ vast and immersive plotting. Kravitz’s role contains fewer catlike hot-and-cold moments that would build a femme fatale persona than one might expect. She rarely seems as though she will turn on Batman except to defy him to pursue her ambition (but their dual motorcycles make them awfully cute together). Pattinson’s Batman, too, feels singularly motivated and emotionally restrained, save for his few scenes with Serkis. Among the supporting roles, Peter Sarsgaard has a memorable turn as Gotham’s district attorney. But Farrell’s casting proves the strangest—he’s under so much convincing makeup that it’s anyone’s guess why another actor wasn’t cast. Still, he’s terrific in the role, regardless of the studio demanding that he lose the signature cigarette holder. The standout is Dano, who’s wholly unhinged as Riddler, a wackjob that feels like an unholy union between the actor’s roles in There Will Be Blood (2007) and Prisoners (2013). Although much of his performance in the first two hours occurs behind an impenetrable mask, his heavy breathing and octave-defying voice do plenty to unnerve. Much later, his unmasked scenes reveal the creepy, chilling, psychopathic face underneath.

The Batman is not a spectacle like many versions of the hero before. Of everything on cinematographer Greig Fraser’s resume, which includes 2021’s Dune, The Batman most closely resembles 2012’s Killing Them Softly—an acerbic crime film about American capitalism at its purest. Most of Reeves’ set pieces have an intimate quality that supports the serial killer investigation. What’s more, our Batman is just getting started, making the few action scenes feel dangerous and our hero exposed to real harm. Midway through the film, he finds himself knocked unconscious and surrounded by police, and he clumsily escapes using a wingsuit that, apparently, he hasn’t tested enough. His superheroism is flawed and unproven; he’s still working out the kinks, making him vulnerable and more sympathetic for it. So when one of his bolder moves works in his favor during a wowing car chase sequence (in a souped-up Batmobile that screams like a banshee), and Pattison’s gloomy visage shows the faintest hint of a smile, it feels like a cheer-worthy breakthrough. Still, for all the modesty and relatively small-scale action in the first two-thirds, the final act supplies a massive threat that echoes the citywide panic in Batman Begins—the closest Batman relative to Reeves’ film in ways best left for the viewer to discover.

If The Batman could be accused of being too long—and it feels that way near the end when the story seems to be wrapping up, just before an unexpected final act—Reeves’ overall structure proves admirable and meticulous. When it’s all over, his runtime feels justified. His cast and plotting have been pointed in the same direction, resulting in a superhero film not about catching the supervillain but exposing a history of corruption by looking closer. In that regard, it’s a focused piece of Hollywood filmmaking that supplies a reprieve from the largely conventional output of the DCEU. Even so, the characters register as less dimensional and feeling than their counterparts in other Batman movies, especially Nolan’s. Reeves offers fewer moments that endear the viewer to Batman and especially Bruce Wayne, and for this critic, the emotional investment felt muted next to The Dark Knight trilogy. Nevertheless, each character and performer has been calibrated like a gear in a machine of crime genre plotting and noirish style, making for a memorable and strikingly conceived Batman film. While so many comic book movies feel like variations on the same ideas, and the same formal execution of them, Reeves has made something distinct and fully realized.