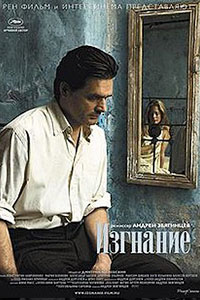 Expectations were high on Russian director Andrey Zvyagintsev’s sophomore feature The Banishment after the success of his Golden Lion-winning debut, The Return. Unfortunately, these expectations were not quite met. The film received a lukewarm reaction after its premiere in the main competition of the Cannes Film Festival in 2007, and it is generally considered the director’s weakest film by critics. However, while The Banishment does indeed not reach the heights of Zvyagintsev’s best work, it would be unfair to dismiss the film as it still contains several aspects that deserve to be praised.

With The Banishment, Zvyagintsev once again tells an elusive story about a doomed family. The family in question consists of father Mark (Konstantin Lavronenko, who also played the father in The Return), mother Vera (Maria Bonnevie, a Swedish-Norwegian actress who was redubbed by Russian actress Elena Lyadova), and their two children, Kir (Maksim Shibayev) and Eva (Katya Kulkina). Mark and Vera are already estranged when the film begins, but things only get worse on a family trip to Mark’s rural childhood home when Vera confesses to Mark that she is pregnant, and that Mark is not the father of the unborn child. Mark, with the help of his brother Alex (Aleksandr Baluev), grapples with how he should deal with this revelation, and his actions ultimately lead to shocking consequences and further revelations.

The film’s screenplay, written by Artyom Melkumyan and Oleg Negin, is loosely based on the 1953 novel The Laughing Matter by Armenian-American writer William Saroyan. In contrast to the novel, which was set in a specific time and place, Zvyagintsev intentionally refused to specify when and where the events of The Banishment take place in order to make the film feel more universal. One of the techniques used to achieve this was to shoot the film in different countries: The scenes in the city where the family lives were shot in Belgium and France, whereas the scenes at Mark’s rural childhood home (which, as well as the nearby church, was specifically built for the film) were shot in Moldova. 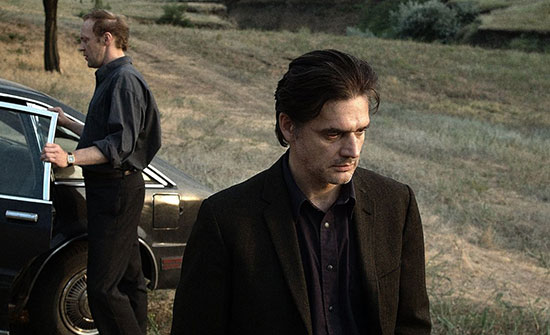 Due to The Banishment having no particular setting, and Mark, the film’s main character from whose perspective the story is told, being rather taciturn and rarely showing emotions, the film has an abstract feel. It mainly works on a metaphorical level and contains many religious references (including a reading of chapter 1 Corinthians 13 from the Bible, and a jigsaw puzzle of Leonardo da Vinci’s Annunciation), but its exact meaning remains elusive. The same could be said about The Return. However, Zvyagintsev’s debut feature also worked on a pure surface level, and it still packed an emotional punch due to its characters feeling more like real people made of flesh and blood than those of The Banishment.

One could perhaps defend Zvyagintsev’s approach by reading The Banishment as a commentary on the decay and alienation of contemporary society where even families are no longer able to communicate and understand each other. By keeping things abstract and thereby creating an emotional distance between the viewer and the events onscreen, Zvyagintsev makes viewers take part in this alienation as they too are not able to fully understand the film’s characters. Still, the abstract and elusive nature of The Banishment makes it a challenging film that requires patience. In addition to that, the film has a hefty runtime of more than two-and-a-half hours, and it could have benefitted from tighter editing.

Despite these criticisms, many aspects of The Banishment deserve to be praised. In particular, the acting (especially by Lavronenko, who received the Best Actor award at Cannes for his performance in the film) and the cinematography are outstanding. Shooting in CinemaScope, Zvyagintsev and his regular cinematographer Mikhail Krichman use the wide frame to full effect. The visual highlight of the film is a stunning two-minute-long take towards the end that follows a stream of water, which emerges from a previously dried-up well and leads under Mark’s rural childhood home.

Zvyagintsev’s The Banishment has a similar style and explores comparable themes to The Return, but it did not match his debut’s success. The main reason for this is the film’s abstract and elusive nature that keeps viewers at a remove. It is therefore not surprising that The Banishment is generally considered Zvyagintsev’s weakest film by critics, and that it only received a theatrical release in the USA in 2018 (eleven years after its premiere at Cannes) when the Museum of Modern Art in New York presented a mid-career showcase of Zvyagintsev’s films. Nevertheless, The Banishment cannot be called a failure. It confirmed Zvyagintsev as a talented director and a master of framing, and it contains outstanding performances and cinematography. Patient viewers and especially fans of The Return should therefore find much to appreciate in the film despite its flaws and mixed reception.