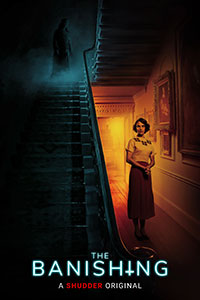 The Banishing feels like an oversimplified reduction of the latest horror series by Mike Flanagan, who has spoiled audiences with The Haunting of Hill House (2018) and The Haunting of Bly Manor (2020)—his Netflix limited series distinguished by their novelistic characterizations and spooky atmosphere. There’s enough plot in the film to fill eight hours. Besides a creaky old haunted house, its characters must deal with a breadth of horror tropes: creepy dolls, missing children, dissociative time-loops, torturous monks, vengeful ghosts, an impromptu exorcism, a paranormal investigator, and occultist Nazis. But British director Christopher Smith crams the material into a stunningly brief and surprisingly coherent 96-minute feature, which, aside from the occasionally confusing edit or uncooked plot element, remains a handsome production with a few good scares.

The screenplay by David Beton, Ray Bogdanovich, and Dean Lines uses the infamous Borley Rectory as a launchpad for a dozen plot strains where just one or two would do. The so-called most haunted house in England was allegedly the site of phantom sounds and spectral sightings that have drawn the attention of paranormal researchers—not to mention authors and filmmakers—for more than a century. The Banishing renames the actual site to Morley Manor, home to a vicar who murders his wife and then hangs himself in the first scenes. A few years later, in the 1930s, the new reverend, Linus (John Heffernan), settles into the manor with the promise of restoring some faith in the churchgoing locals. His new wife Marianne (Jessica Brown Findlay) and their daughter Adelaide (Anya McKenna Bruce) soon join him—all of them based on actual people, albeit loosely. In any case, the Dutch tilts and the presence of eyeless dolls suggest something sinister awaits them.

The resident harbinger, an intense paranormal fanatic named Harry Reed (Sean Harris), issues crackpot warnings to Marianne and Adelaide about the dangers of staying (“Get out of there before it’s too late!”). And it doesn’t take long for the haunted manor to incite jealousy, excessive drinking, irrational anger, and paranoia among its new inhabitants, taking a cue from The Shining (1980). Marianne sees curious images of doppelgängers in the walls and an old mirror, while Adelaide starts talking to voices only she can hear. Linus doesn’t want to hear about such things; he transforms into a domineering autocrat whose complicated history with Marianne eats away at his pride. Before long, Reed’s ravings about a monastic order that worked beneath Morley Manor and used torture to achieve godliness becomes one of several plot elements that reveal the horrifying things people do in service of “God’s will.” 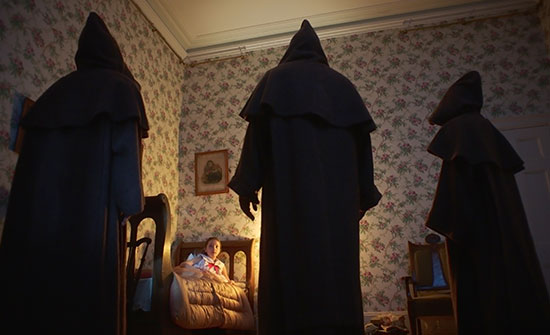 Indeed, The Banishing contains an undercurrent about the danger of extremist beliefs. Whether they’re rooted in Christianity or fascism, extremist ideologies tend to be destructive, and the film confronts them as sources of “evil.” Take the peripheral character Bishop Malachi (John Lynch), who has ulterior motives when arranging for Linus’ family to stay at Morley Manor. At one point, Reed calls him out as a Nazi sympathizer, and just when you think the accusation is the fantasy of the alcoholic character, The Banishing leaves us with a final note that confirms Malachi is gathering occult artifacts for Hitler—another detail from history loosely woven into The Banishing’s story. Elsewhere, Linus and the dreaded monks from yesteryear have some hangups related to the Bible’s verses about sexual immorality. When Marianne tries to consummate their marriage, he rebuffs her advance out of intense shame. At every turn, characters find extremism to be ruinous.

Smith is best known for a solid career of small thrillers and horror fare in recent years, the standouts being Severance (2006) and Triangle (2009). One of his best, Black Death (2010), offers a similar critique of dogma, Christian or otherwise. In The Banishing, Smith mounts an admirable production shot on location in various estates in England. The interiors appear decorated with wallpaper and furnishings from the era, while smaller, more unsettling details emerge in paintings of ghostly figures. Even though much of the film involves several cliché sequences of characters investigating a dark basement with an unreliable flashlight, Smith manages to make the proceedings look authentic, as opposed to captured on soundstages. His greatest asset is cinematographer Sarah Cunningham, who shoots daylight passing through the dusty air just as confidently as she tracks the movement through the manor’s narrow hallways using a handheld technique. Even when shooting typical scenes—such as the overhead lights in a hallway shutting off in a scary procession—Cunningham captures the moment with active, vibrant camerawork.

While the screenplay could have better fleshed out plot points to align with the film’s themes, The Banishing’s sheer number of thematic tributaries meet in a worthy confluence. Not every detail is explained to a satisfying degree, and the characters could have used some additional substance through extended backstories. (Audiences in the mood for a less overloaded period ghost story might seek out The Little Stranger from 2018.) Still, one watches the film with an eagerness to discover what happens next. Smith offers a work of Gothic horror that avoids the cheap manipulation of its audience. His bag of tricks—the same jump-scares and don’t-go-down-there situations employed by the average Blumhouse or Conjuring Universe offering—is applied with care, supported by a particularly restrained score by the duo Toydrum. Smith shows that timeworn devices can still make an effective horror film, even if it leaves the viewer wanting to know more about what happened and the people it happened to.