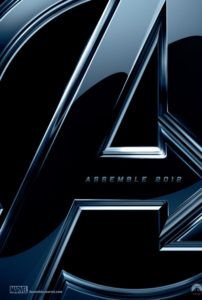 Developed in 1963 as Marvel’s answer to DC’s superhero team Justice League (featuring Superman, Batman, Wonder Woman, Green Lantern, Flash, et al.), The Avengers supplies a comic tradition where numerous superheroes join forces against a common or superior enemy, but not without facing off against each other first. Naturally, superheroes have bold personalities; they’re champions of their particular realm—why shouldn’t they swell with pride about it? But when assembled, such personalities clash and infighting occurs, and our favorite heroes must inevitably learn to work as a team before they can tackle the colossal threat that brought them together. Another comic tradition is the “crossover,” where an overarching storyline unfurls in the pages of multiple issues and usually ends in a double-sized, chromium-covered, mega-book to conclude the storyline. The Avengers is the equivalent of this, but not without planting the seeds for future sequels and spin-offs.

Marvel Studios started something wholly unprecedented in 2008 by laying the groundwork for this film in Iron Man, The Incredible Hulk, Iron Man 2, Thor, and Captain America: The First Avenger. Each individual entry contains tidbits pointing toward this larger film, and by maintaining a hands-on approach to their productions, they ensure each entry is strong enough as a stand-alone feature, but also a key component in a larger whole. As a result, there comes an expectation that The Avengers, being a culmination of several successful blockbusters, should be nothing short of epic. It should appeal to both fanboys and those unfamiliar with comics. Broadening the storylines established by the preceding films, it should give each character their due and yet not allow a single star to shine too brightly. It should be bigger, louder, smarter, more expensive, and ultimately more entertaining than the other films. So, does it succeed? Hell yes.

With these requirements in mind, Marvel hired writer-director Joss Whedon to helm The Avengers. He’s a former comic author in the pages of X-Men; he’s garnered a cult following for his TV show Buffy the Vampire Slayer; he directed one modestly successful film with Serenity, an offshoot of his show Firefly; and he’s also a resounding comic nerd and generally adored among fanboys. As such, he appreciates the material enough to know what comic fans expect from a film like this, because it’s what he would expect. More importantly, he understands how to make the material universal, adapting it in such a way that general audiences will be able to identify with the central characters without the need to know their off-screen backstory. What’s more, working with a reported budget of $220 million, Whedon has resolved to put every dollar toward wowing his audience with the most satisfying event movie to come out of Hollywood in recent memory.

Working from an initial draft by Zak Penn (X-Men: The Last Stand), Whedon’s script picks up where 2011’s Thor and Captain America left off. Banished Asgardian mischief-maker Loki (Tom Hiddleston) forms an alliance with an alien race called the Chitauri (lizard things with biomechanical armor), promising them the Tesseract, an energy cube of unlimited power, if they lay waste to Earth so he may rule. Loki steals the MacGuffin from its current holders, Nick Fury (Samuel L Jackson) and his super-spy agency S.H.I.E.L.D., and hides it while the Chitauri plan their attack. At the same time, Fury relocates to his new HQ—a massive, cloaked flying aircraft carrier, a spectacular effect—and plans for the worst. To find the Tesseract and stop Loki, his agency brings together a proposed team of heroes, The Avengers. When the personalities gather, the film’s first half explores their squabbling and clash of egos, until finally, they band together for an exhausting second half in the battle against Loki and his alien army. 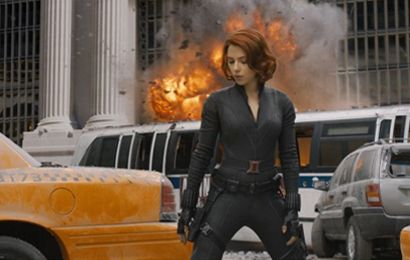 Whedon’s storytelling is at its best as he balances screen time amid Earth’s Mightiest Heroes, portrayed by some very fine actors. Top-billed and center stage, Robert Downey Jr.’s Tony Stark dons his Iron Man armor, carting his genius behind his snarky motormouth and signature narcissism. Another classic egocentric, Thor (Chris Hemsworth), travels from Asgard to confront his adopted brother Loki, spouting Shakespearian brogue along the way. Mark Ruffalo, who replaces Edward Norton as Bruce Banner, brings a soft-spoken nerviness and impressive nuance to his character. His alter-ego, The Hulk, was performed through motion capture and looks like Ruffalo; the effect is entirely convincing and occasionally brilliant. Displaced in an era not his own, Steve Rogers, a.k.a. Captain America (Chris Evans) brings a naïve but necessary idealism to the team to help unite them. Reprising her Iron Man 2 role, Scarlett Johansson represents the sole female member of the group as the former assassin Black Widow, but Whedon has gone to great lengths to make her stand out arguably more than any other. The newest member, seen briefly in Thor, is a bow-and-arrow sharpshooter named Hawkeye (Jeremy Renner), who seems somewhat underdeveloped next to the others. Save for the resident Captain, each character could be described as “Does not play well with others.”

Obvious attention is placed on Marvel’s most successful hero and franchise fan-favorite Iron Man, but this is hardly a solo effort. Granted, the film’s climax takes place on Manhattan streets surrounding the newly erected Stark Tower, but Stark’s dramatic arc feels less significant than those of Banner or Black Widow. In The Incredible Hulk, Banner still struggled to control his green rages, but in the exciting finale, his counterpart becomes relatively self-aware—he becomes a hero instead of a monster. Seeing this side of Hulk may be more consumable for audiences, who can finally root for a character able to differentiate between good guys and bad guys. Ruffalo, an actor normally associated with indie dramas, admittedly outdoes Norton (and Eric Bana before him) when his character blossoms—enough for audiences to clamor for another solo Hulk feature with Ruffalo as the star. Likewise haunted, we learn much more about Johansson’s Black Widow and her blood-soaked past; her best scene is not only a film-best but provides the film’s most impressive acting: She interrogates Loki, who responds with jaw-droppingly violent and cruel threats, snarled with precision by Hiddleston. The look of terror on Johansson’s face is undeniable and then punctuated with a wonderful turnaround.

With any comic book film, there are always mild-to-great disappointments in how the filmmakers have adapted characters from the page to the screen. Some are merely nitpicking on the part of fanboys; others are noticeable by anyone. For example, anyone could tell too many villains clogged up Spider-Man 3, whereas no one outside of a comic book shop cared how Galactus was rendered into a cloud-thing in Fantastic Four 2. Here, fanboys can delight in how much Whedon gets right. But in addition to not exploring Hawkeye enough, Whedon’s choice to provide our heroes with a high body count via anonymous Chitauri aliens (obscure Marvel characters, to be sure) is questionable. Granted, his story infuses elements of The Avengers issue #1 from 1963, in which Loki manipulates Hulk into a frenzy and, in turn, unites the Avengers, but in the last half, Whedon’s focus remains on Loki orchestrating a war of Chitauri pawns. Of course, this decision makes an effective storytelling device by allowing The Avengers’ first assembly to be about an ideal gathering of heroes more than the disposable villains. Still, the comic nerd in me wanted a more recognizable crowd of baddies for our heroes to clobber. (Fortunately, the Chitauri’s presence leads to a post-end-titles scene that will leave fans giddy.) 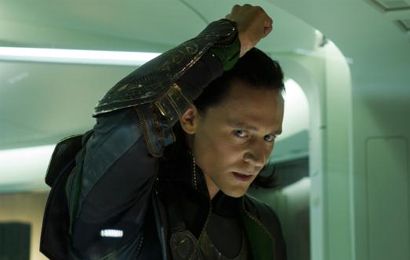 However negligible a disappointment Whedon’s choice of alien race may be, he makes up for it in his arrangement of stunning battle sequences, superhero smackdowns, and most importantly a riotous sense of humor. Early on, Iron Man and Thor go head-to-head, followed by the two powerhouse characters, Thor and Hulk, throwing each other around (their conflict comes up again later on, unexpectedly, abruptly, and hilariously). Likewise, Stark’s quick-witted zingers and Cap’s dislocation in another century furnish no end of laughs in Whedon’s usual brand of smart, punchy dialogue. These conflicts and joking moments are mostly for comic effect, but they also illustrate how non-cohesive these characters seem when placed next to one another, and how they require wrangling to become a team. S.H.I.E.L.D Agent Coulson (Clark Gregg), a nice-guy character present in this ongoing franchise since Iron Man, serves as superhero glue. In a subplot both funny and tender, he’s star-struck by Captain America and wants only f0r the Captain to sign his vintage superhero trading card set. As Whedon injects copious amounts of humor into the proceedings, he plays with his characters’ dynamic and personal limitations in a self-aware style, but without risking the integrity of the characters themselves. Rather, he enhances them.

When it’s all over, only one question remains: How will audiences react to solo stories for characters like Iron Man, Thor, Captain America, and The Hulk in the future? A film as grandiose as The Avengers threatens to dwarf anything placed next to it. Won’t next year’s Iron Man 3 and Thor 2 seem underwhelming in comparison? Could Marvel have unwittingly undone their smaller franchises by making too good a film here? My hope is that as long as Marvel continues to distribute the kinds of quality superhero films we’ve come to expect since Iron Man, faithful audiences will return for the next building block not only in the individual stories but in anticipation of the inevitable sequel to this giant-sized crossover. Marvel should take care and make the best films they can in the coming years, as they risk turning the in-between movies into nothing more than “the next building block” to The Avengers 2.

That said, you won’t likely find a more rousing, purely entertaining, popcorn-munching blockbuster this summer. No spectacle on par with this film has arrived in theaters since Avatar, and at a similarly long 142 minutes, the film breezes by. On these levels, and a plane of sheer superhero movie joy, The Avengers delivers in every respect. It’s not a flawless film (what film is?), but its modest flaws (mostly the quibbles of comic book aficionados) are washed away by its incomparable height of showmanship that has yet to be matched in this genre. While Christopher Nolan’s Batman films elevated the superhero film by achieving an unparalleled dramatic and artistic timbre, Marvel’s decidedly more comic-booky endeavors find their pinnacle in The Avengers. Just as it should, the film outdoes what have now become its five prequels. After four years’ worth of building piece by piece against mounting expectations, Marvel and Whedon have managed to satisfy the majority of fan expectations, and in some ways, even exceeded them.