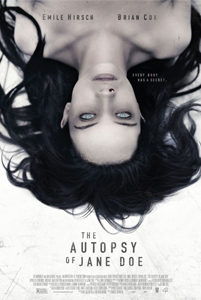 Norwegian filmmaker André Øvredal follows his impressive debut on the found-footage adventure The Troll Hunter (2011) with something far more interior and claustrophobic, albeit still a midnight madness genre effort. The Autopsy of Jane Doe begins with an intriguing, can’t-take-your-eyes-off-it premise and execution, but the movie suffers from an unconvincing third act. The screenplay by Ian Goldberg and Richard Naing combines two well-worn genres: the televised forensic investigation drama, such as Forensic Files or various C.S.I. incarnations and your typical haunted house fare, complete with mysterious sounds and shadows that warrant investigations in the dark, preferably alone and without a working flashlight.

The setup involves a murder scene in a rural Virginia home. Several people have been killed in various gruesome ways while apparently trying to escape the house, though no evidence indicates the residents were in any way trapped. The plot thickens when investigators find the corpse of a young woman (Olwen Kelly) buried in the cellar. Hoping to learn what happened in the house, the Sheriff (Michael McElhatton) delivers the unidentified body to Tilden Morgue & Crematorium, the family-owned operation run by widower Tony (Brian Cox) and his son Austin (Emile Hirsch). Though the son wants out of the family business, he postpones a late-night date with his girlfriend Emma (Ophelia Lovibond) to help out with the rush request.

What proceeds might be an initially antiseptic autopsy, except Cox and Hirsch lend their roles enough personality to bolster the ensuing incredulity of their characters. Indeed, the nameless corpse contains several mysteries that complicate any explanation of what happened back at the house. She appears to have been dead for some time; however, there’s no rigor mortis. On the exterior, her body appears completely undamaged and without bruises or wounds; yet her internal state suggests she was bound and tortured to death. When they open up her chest cavity, they discover she has been stabbed, burned, mutilated, and force-fed strange objects such as a flower and one of her own teeth. How could any of this occur without leaving a trace on her exterior?

The autopsy’s secrets would all be interesting enough, but soon father and son begin to experience strange phenomena: radios turn on, lights flicker, and an expected cat-scare proves unexpectedly tragic. With the second act, things get really weird and other-worldly. The writers explore some creepy paranormal activity but aren’t clear about the rules, if any exist, about what’s happening. The evidence found within the corpse seems to have significant meaning, but what could it be? Phantom images appear and disappear and sometimes interact. Morgue lockers open on their own. Bodies seem to get up and haunt the morgue’s hallways like zombies. Are they zombies? Are they even real? The answers and explanations pique our interest (and give us the willies) for much of the movie’s 86-minute runtime, but the specifics are never explained beyond cursory hints, which proves disappointing.

Cox and Hirsh elevate the material beyond a level it deserves, deceiving the viewer into thinking there’s more here than an underwhelming B-movie. Likewise, Øvredal handles the early scenes of the investigation with gross and gut-wrenching detail, along with a fascinating matter-of-factness about the early stages of the autopsy. The digital photography by Romain Osin looks sharp and expertly composed, at least until The Autopsy of Jane Doe descends into some distractingly bad CGI (smoke, fire, creepy moving corpses). Unfortunately, the climactic sequence looks cheap in addition to providing an insufficient explanation as to what just happened, leaving the viewer on a sour note. The movie’s early, slow-burning potential is squandered by its adherence to popular genre tropes, all of which seem underwhelming after the first two-thirds. By the time the movie ends, any established goodwill is squandered on a rushed, kitschy, and unsatisfying finale that negates most of what preceded it.