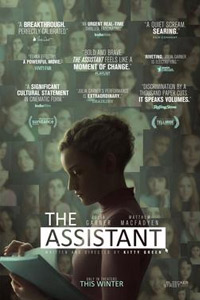 Kitty Green’s The Assistant is about Harvey Weinstein and his behavior that exploded into the #MeToo movement in 2017. But Weinstein exists on the periphery of this story, which takes place at an unnamed movie production company whose working environment mirrors the Miramax offices in Manhattan. The once-powerful and feared executive never appears, and neither he nor the company are ever mentioned by name, but everybody watching knows what it’s about. His muffled voice can be heard through walls or barking on a telephone. His presence, or lack thereof, is apparent from the crumbs on his desk, the half-eaten donuts left on a tray, and other remnants left behind in his office. He’s the subject of most conversations and unspoken looks exchanged between the lower support staff, who know about their boss’ dirty secrets yet choose to say nothing because to do so might threaten their opportunity to work in showbusiness. However, the film’s sharp, thoughtfully composed screenplay does not need to dwell on specifics; its portrait is not of Weinstein directly, but the psychological implications that come with abuses of power.

Green’s film is told from the perspective of Jane, played by Julia Garner, who has only been on the job for just five weeks but has quickly adapted to the office dynamics. She’s a smart Northwestern grad who dreams of a future as a movie producer, and she doubtless knows that most people in the industry start on the bottom and eat untold piles of shit before they finally make it. The Assistant is Jane’s story, though most of the film’s a-day-in-a-life structure shows her preparing for others in a series of menial tasks and understated gestures. She arrives at the office before anyone else, tidies up, prints documents needed for meetings, brews coffee, responds to emails, and arranges schedules. It might seem trivial until Jane tries to manage an awkward call from the boss’ wife, which leads to the boss shouting at her over the phone. The humiliating exchange is overheard by Jane’s two male coworkers (Jon Orsini, Noah Robbins), and they stand over her shoulder to dictate her apology email. Given the demeaning boy’s club behavior that ensues, it’s evident that the boss’ example has started to spread.

As the day carries on, hints at the seedier reality of this work environment linger beneath the surface, and Green employs an expert minimalist approach. The Assistant is her first dramatic feature after two documentaries (Ukraine is not a Brothel, Casting JonBenet). She spent years conducting interviews and researching the atmosphere at Miramax, and she uses her film’s form to immerse the viewer in Jane’s subjectivity. Michael Latham, the d.p., shoots Jane in a style of long, mostly stationary shots. The color palette appears to have been muted or desaturated, accentuating the gray office environment under the life-draining overhead illumination. Given that almost no score exists—Tamar-kali supplies a few notes on the piano over the opening and closing scenes—the sound design emphasizes ambient noise. As we watch Jane carry out her duties, we become acutely aware of buzzing fluorescents, pounding keystrokes, loud mouse clicks, and a deafening printer. Green accentuates these minor details and renders an oppressive visual and aural setting; in doing so, she makes a vital critique about toxic office culture. 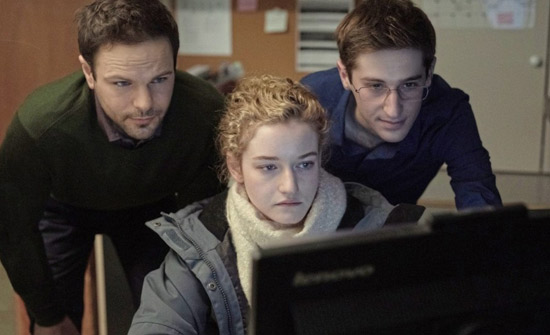 The situation escalates when the boss hires a new and inexperienced assistant (Kristine Froseth) from Idaho, seemingly for her looks. He disappears, and so does the assistant, for a midday meeting in her hotel room. The office scuttlebutt suggests the two of them are “in a personal”—Jane’s diplomatic term for what happens when the boss misses several business meetings because he’s courting the new employee. Worried for the newbie, Jane resolves to visit Human Resources and file a complaint. The disturbing exchange between Jane and Wilcock (Matthew Macfadyen) recalls something out of David Mamet’s Oleanna, where two parties discuss sexual misconduct without actually getting into specifics. “What can we do?” she asks. “Do about what?” he replies. Finally, he’s forthright about his assessment of the situation: “Why are you in here trying to throw it all away with this bullshit?”

Around her, Jane’s coworkers perform all manner of mental gymnastics to compartmentalize, deny, or justify what is happening—behavior that’s about self-preservation yet also enables. Having worked in an office setting, this critic can attest that the film’s portrait of such characters is unmistakably accurate. Without ever getting into specifics, a coworker attempts to quell Jane’s concerns about the new assistant: “She’ll get more out of it than he will. Trust me.” At the same time, the boss has a tear-down and build-up approach. He insults Jane with a devastating call about her trip to HR, she apologizes again in an email, and he responds with flattery that seems to make it all worthwhile: “I’m tough on you because I’m gonna make you great.” This sort of intimidation makes everyone complicit out of an understandable hope for their future. Green’s portrayal of office power, and the willingness of employees to sacrifice their dignity or morals for a paycheck, feels achingly true.

Of course, viewers looking for an exposé of the Weinstein saga, complete with celebrity names and sordid details, will have to wait for the Hollywood version—something akin to Bombshell, last year’s star-studded account of the Roger Ailes scandal at Fox News. The Assistant says more without naming names, however. Even so, it premiered at Telluride in 2019 and hasn’t struck a chord with mainstream audiences because Green relies on subtlety and undisclosed details. If there’s one thing the average moviegoer doesn’t appreciate, it’s ambiguity. But this film doesn’t set out to supply a journalistic account of Weinstein’s downfall. It accomplishes something more by using a specific context to comment on a larger problem in offices the world over. If the titular character remains underdeveloped, it’s in service of a discussion that goes beyond a single set of circumstances. To that effect, Green has made an engrossing and meticulously detailed film about the psychology and culture that allows such crimes to persist.