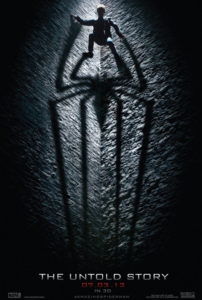 If there was ever any doubt that superhero movies are commercial products first and works of cinema second, here’s your proof. Arriving just ten years after the first entry in director Sam Raimi’s Spider-Man trilogy and five years after his last, Sony Pictures’ The Amazing Spider-Man reboots their tentpole franchise by beginning anew and hooking a younger audience. Each of Raimi’s films proved commercially successful, but after the underwhelming critical and fan reception of Spider-Man 3, the director and studio parted ways. Sony then announced their intended plans to ostensibly erase Raimi’s films from our moviegoer consciousness and replace them with something altogether new. Rather than hire a different director and cast, and take a logical step forward from where Raimi’s series left off (like how The Incredible Hulk rebooted from Ang Lee’s Hulk without needing to start over), Sony’s new film relaunches from the beginning and makes only minor changes to the household tale that is the Peter Parker-turned-Spider-Man origin story, now so commonly known that it feels painfully redundant to see again.

Nevertheless, what Sony’s marketing campaign desperately wants you to believe is that their new Spider-Man is somehow different this time around, intensified by a layer of gravitas. To contrast the comic-book fun of Raimi’s films, the campaign uses deeper, darker colors on the posters, and the trailers sell a mystery meant to drive the plot more than web-slinging action. Obviously redolent of how Christopher Nolan’s Batman Begins took a darkly dramatic leap away from the flashier Batman films that preceded it, Sony’s reboot seeks to establish our involvement in what’s promised to be weighty secrets lurking behind the disappearance of Peter Parker’s parents, and thus the unsolved origin of this New York City hero. In turn, Spider-Man, motivated by the loss of his parents, becomes a Self-searching detective of sorts, who uses his knowledge of science to advance his physical abilities. Sound familiar? Similarities to Nolan’s Batman should not be ignored, as they’re all over this film and shamelessly exaggerated to create a latent stylistic kinship with Batman Begins and its sequels. There’s even a lesser-known villain for this first film (think Scarecrow), with the promise of bigger, more recognizable villains for the inevitable future sequels (The Joker, Two-Face, et al.).

The “it’ll be like Batman Begins” pitch by director Marc Webb must have seriously impressed Sony execs (unless they just wanted a young director they knew they could control, or perhaps they were just dazzled by the pun of a man named Webb helming a Spider-Man film), because nothing about his only other feature, the romantic comedy (500) Days of Summer, suggests he’s capable of handling such a large-scale production. And though Webb delivers a fine looking film, there’s no personal stamp to be found. Fortunately, his cast is made up of talented young stars and venerable old greats, none of whom look the age of the character they’re playing. The 28-year-old charmer Andrew Garfield (The Social Network) plays high-schooler Peter Parker with awkward energy and spends most of his time as Spider-Man without a mask. Emma Stone, 23, plays Gwen Stacy, Parker’s first love interest from the comics before Mary Jane Watson comes into the picture. Garfield and Stone’s off-screen romance as a result of this production adds much to their onscreen chemistry; their characters’ romance is the best part of the story. Martin Sheen makes an affable Uncle Ben; Sally Field looks far too young to play Peter’s Aunt May; Dennis Leary plays Gwen’s father, the resident Police Chief who, in believing Spider-Man is a criminal, replaces the need for J. Jonah Jameson.

But no matter how impressive a cast, no matter how moody the marketing, no matter what superficial alterations the film’s three credited writers make to the character, none of it can distract from the familiarity of Spider-Man’s origin story as repeated here. Most of what occurs we’ve seen before: There’s another scientifically altered spider that bites young Peter and another groggy night as his genes mold with the spider’s venom. He wakes up the next morning and explores his powers, which he uses irresponsibility at first, cuing this Uncle Ben’s equivalent of the “with great power comes great responsibility” speech. Of course, Uncle Ben dies because Peter ignores this advice, and so Peter vows to use his newfound powers for good. While the new story confines Peter to high school—with Peter as a skateboarding loner—he still juggles his super-abilities, his love interest, and the imminent villain in the same lighthearted way. As a result, the entire first half is all but carbon copied from Raimi’s film, while the actionized second half feels not copied but distractingly familiar.

Indeed, there’s even another wacko Oscorp scientist meddling with dangerous chemicals; and like Willem Dafoe’s Green Goblin, the new baddie’s obsession turns him into a green supervillain with moments of split-personality disorder. Rhys Ifans plays Dr. Curt Connors, one-armed scientist extraordinaire who believes mixing lizard and human DNA will allow people to grow back severed limbs. Sure, his arm grows back, but the process also transforms him into the 8-foot-tall rampaging Lizard, who’s now determined to transform all of humanity into a race of fast-healing lizard-people free of disease and resistant to harm. At least his intentions are noble. For some reason, Lizard is accompanied by hordes of unexplained, scampering reptiles whose purpose I have yet to determine. How does all this fit into Peter’s search for answers about his parents? The same genetic experimentation that fuelled Connors’ research inspired Peter’s dad to conduct research on spiders. And what answers does this bring to Peter? None here. You’ll have to wait for the sequel. Breadcrumbs about Peter’s father are dropped occasionally, but they never amount to anything except more questions, including a frustratingly cryptic post-credits scene.

To differentiate itself, The Amazing Spider-Man’s hero has a varied skills-set than the one played by Tobey Maguire. Garfield’s version is arguably truer to the comics in terms of Spidey’s use of technology, whereas Maguire’s version remained truer in spirit. The new Spider-Man cannot generate webbing on his own; he must engineer web-shooters and carry with him bio-wire cartridges (which apparently any schmoe can order in bulk, courtesy of Oscorp). You’d think this would lead to a sequence where Spider-Man runs out of webbing at just the wrong time—say, in the middle of a battle with the Lizard—but Peter has apparently stocked up on cartridges. What’s the point of putting a limitation on the webbing if it serves no purpose in the suspense or action? Peter also now has a “spider sense” that warns him when things are about to go awry and triggers his reactionary instincts, another inclusion from the comic omitted in Raimi’s versions. Certainly early scenes where Parker explores these new abilities and tech compare to Iron Man’s best moments of Tony Stark’s trial-and-error process of experimentation. But these surface changes are so minor in the grand scheme of things that they hardly matter (although they may be enough to win over some die-hard comic fans).

Webb’s production, originally announced with a modest $80 million budget that skyrocketed to over $215 million, takes an effects-heavy approach. Shot in 3-D, as opposed to post-converted 3-D, objects and characters fly at the screen and add nothing to our involvement. The CGI web-slinging scenes look good, about what you’d expect from a modern Spider-Man movie, slightly improving over the previous Spidey films. But with all that money spent, Lizard still looks like a second-rate computer-generated creation, poorly designed, and even downright laughable at times. It’s a snarling, silly piece of animation, almost as silly as the Spider-Man point-of-view shots, abridged and choppily cut together here from the teaser trailer footage shown at the 2011 Comic Con. With The Avengers still fresh in our memory and its series of CGI characters rendered with tangible wonder, seeing this film’s subpar Lizard and other computer creations is underwhelming. Strangely, the most disappointing aspect of the production is James Horner’s uneven and uninspired score, which taps into his own Titanic music from time to time, and seems overly grandiose compared to what’s happening onscreen (choral music is not needed for high-school battle scenes).

Sony took a gamble making this film so soon after Spider-Man and especially the beloved Spider-Man 2, and what they’ve ended up with is something akin to that oddball flop Superman Returns. Just as Superman will for many always be Christopher Reeve and not Brandon Routh, for me Spider-Man will always be Tobey Maguire under Raimi’s helm. Almost this entire review has been about how The Amazing Spider-Man stacks up against the previous Raimi versions, and perhaps that’s not fair on my part. If one considers the film on its own, with no comparisons whatsoever, then admittedly Webb has made a diverting picture. Garfield and Stone give genuinely good performances, even if they’re far too old to be playing teenagers. Regardless, it’s a blockbuster audiences will enjoy. But coming so shortly after such a memorable trilogy, Webb has failed in creating an experience that renders what came before obsolete. Unlike Batman Begins (which made the world collectively forget about Batmans played by Michael Keaton, Val Kilmer, and especially George Clooney), this film leaves us comparing it to Raimi’s previous series. That I’m even still thinking about Raimi’s films is how I know Webb’s recombination of old ideas has failed in its task to create something new.