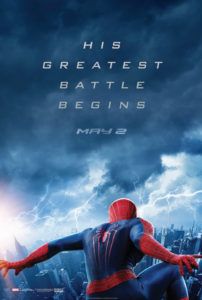 Opening 2014’s summer blockbuster season and proving as redundant as its predecessor, The Amazing Spider-Man 2 features quirky romance and generous aerial web-slinging to rouse popcorn-munching moviegoers. However, no amount of CGI-animated action can distract from the overstuffed storyline, packed to the brim with three villains and the promise of more to come. In 2012, Sony relaunched their blockbuster superhero franchise with The Amazing Spider-Man just five years after Sam Raimi’s Spider-Man 3 disappointed Marvel enthusiasts. Now director Marc Webb, the relaunch’s primary creative force, has made the same mistake as Raimi’s last entry—he crams too much plot into an overlong runtime. Fortunately for Webb, the studio has already made plans for The Amazing Spider-Man 3 and 4, not to mention their upcoming Spidey spinoffs (Venom and The Sinister Six), ensuring inescapable franchise exposure and solid commercial performance regardless of this sequel’s lukewarm reception.

In The Amazing Spider-Man 2, screenwriters Alex Kurtzman, Roberto Orci, and Jeff Pinkner enclose an adorable romance inside a bloated, unfocused superhero yarn. At the center is the charming romance between smart-alecky Peter Parker and his brainy blonde girlfriend Gwen Stacy, played by the real-life couple Andrew Garfield and Emma Stone. Their obvious chemistry, offbeat humor, and playful banter sustain our emotional investment throughout the film, which is tested with multiple villain strains. Having just graduated high school after the opening scenes (hilariously so, Garfield being 30, Stone 25), the couple hits a rift when Peter remembers his promise to Gwen’s late father (Dennis Leary) that he’d keep away from Gwen less his Spider-Man alter-ego put her in harm’s way. Back-and-forth, Peter and Gwen separate and get together again, Peter torn between his love for Gwen and his superhero responsibility. At the same time, Gwen contemplates leaving New York to accept an Oxford scholarship. And when Peter isn’t pining after Gwen, he’s investigating why his parents (Embeth Davidtz, Campbell Scott) abandoned him, what his Aunt May (Sally Field) knows about it, and what their disappearance had to do with the evil corporation Oscorp.

Meanwhile, Spider-Man contends with super-villain conflicts from every angle. First, he foils a heist by a tattooed Russian, Aleksei Sytsevich (Paul Giamatti). During the fracas, Spider-Man saves mentally unstable Oscorp employee Max Dillon (Jamie Foxx), a Spidey-obsessed loner who talks to himself, mostly about his own birthday. Dillon is ripe for an accident that inevitably will render him even more unstable and super-powered; sure enough, he’s electrocuted and falls into a vat of genetically engineered electric eels, in turn transforming him into an electric-powered wacko who hears taunting voices and names himself Electro. Elsewhere, Peter’s best friend from childhood, Harry Osborn (Dane DeHaan), returns home to inherit the legacy of his dying father (Chris Cooper), not to mention his father’s terminal genetic condition. To save himself, Harry grows fixated on finding a cure, no matter how extreme, and determines that to find one, he must infiltrate Oscorp’s top-secret labs, which are kept under wraps by corporate stooge Donald Menken (Colm Feore). Harry enlists Electro’s help to access the Oscorp tech that will heal him, but it also transforms him into the crazed Green Goblin. Later, Spider-Man must contend with both Electro and the Green Goblin. Later still, Sytsevich shows up as the armor-suited Rhino. All the villains conveniently master their powers and new costumes within moments of receiving them.

Just like Peter, the audience is pulled in every direction as the writers clumsily juggle the various oppositional plot elements. And though Peter’s romance with Gwen is affecting and charming stuff on par with Webb’s debut feature (500) Days of Summer, every component that makes The Amazing Spider-Man 2 a superhero movie feels superficial and lacking urgency. Each villain represents a one-note construction, and just because there are three of them doesn’t mean the film’s roster of villains results in a three-dimensional conflict for our hero. They’re underdeveloped baddies included only to provide this sequel with obligatory high-flying action sequences, name-brand recognition, and more faces to feature in videogames, toys, and posters. Indeed, these villains and the whole scenario were engineered for maximum commercial coverage instead of dramatic merit. Over any Spider-Man film before it, this one feels more like a product than a movie. Worse, Webb’s treatment carries severe tonal inconsistencies, inelegantly alternating between Spider-Man’s lighthearted, quip-laced action to the comparably serious subplots involving Peter’s parents, Harry’s descent into madness, and the devastating heights reached in the climax with Gwen.

In some areas, Webb was clearly influenced by Christopher Nolan’s wonderfully gravitas-laden Dark Knight Trilogy, but in others The Amazing Spider-Man 2 suspiciously resembles the cartoony quality of Joel Schumacher’s Batman Forever or Batman & Robin. Consider how Foxx’s Electro seems to be a composite of Jim Carrey’s Riddler (an undervalued corporate lackey who goes mad) and Arnold Schwarzenegger’s pun-spouting Mr. Freeze (shooting energy rays and mindlessly bent on revenge). Marton Csokas appears as a ridiculous mad scientist of zany-faced expressions named Dr. Kafka, a character for which outrageously over-the-top is too subtle a description. DeHaan, playing a role very similar to his part in Chronicle, becomes absurdly grotesque in the climactic battle, reminding us of Venom’s abbreviated appearance in Spider-Man 3. Whether the villains are hysterically absurd or brooding and dark, there’s no grand vision behind this film to bring the competing tones together.

Other facets of production feel cluttered or inconsistent as well: the choppy cutting by editor Pietro Scalia, Hans Zimmer’s unmemorable and largely electronic score, and the iffy special FX work. Nevertheless, The Amazing Spider-Man 2 will have its defenders—those who call it “entertaining” and argue that it supplies reasonable diversion during its overlong, 142-minute runtime. But the plot’s girth shouldn’t be mistaken for substance, and zippy, fast-moving action scenes don’t necessarily translate into adequate summer blockbuster entertainment. In an age where recent Marvel titles like Captain America: The Winter Soldier or The Wolverine have demonstrated that comic book fare can be much more than mindless action, Sony has resolved to deliver a shallow commercial product in all the worst ways. What’s most frustrating is that the romantic heart of the film has real potential, but it feels undone by the filmmakers’ tireless mission to include the requisite trappings of a superhero epic—every last one of them, no matter how graceless or overcrowded their inclusion may be.