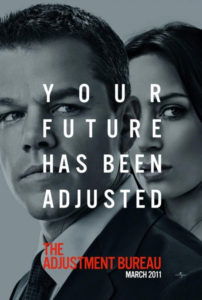 Though based on the 1954 short story Adjustment Team by Philip K. Dick, who authored the source material for A Scanner Darkly and Total Recall, director George Nolfi’s film The Adjustment Bureau works better as a romance than a science-fiction thriller. The film was executive produced by Dick’s daughter Isa, who manages the late author’s estate and has helped make him one of the most adapted-to-film writers since Stephen King. And while the screen story, scripted by Nolfi, diverges much from his source material, he allows Dick’s idea to flourish through an engaging romance at the film’s center. As Dick’s short stories were more often explorations of sci-fi theories than character-driven narratives, Nolfi has done the author justice by giving considerable gravity to the story’s basic concept.

Dick’s premise was that humanity followed a written path—that we were under regular surveillance by “case workers” who monitor and adjust our lives accordingly to ensure we remain on track toward our chosen destination. These agents resemble 1940s G-Men with fedoras and sharp-tailored suits, a detail no doubt inspired by Dick’s paranoia that he was being watched by the FBI. If we begin to stray from our predetermined course, they block phone calls or spill a cup of coffee to delay us, setting us straight. We have control over our emotions and tastes, but the broadstrokes of our lives have already been written in The Plan. And so, here’s another clever way that Dick questions that archetypal sci-fi conflict of Free Will vs. Determinism, explored so wonderfully in another Dick adaptation, Steven Spielberg’s Minority Report.

Nolfi expands the concept by incorporating high romantic stakes, which wouldn’t have worked as well without the undeniable chemistry between the two leads. Matt Damon plays David Norris, a rising congressman running for U.S. Senate. After just losing the election, he meets ballet dancer Elise (Emily Blunt), who inspires him with her ease and beauty. But according to The Plan, they were never supposed to meet more than once. Yet, when chance would seem to bring David and Elsie together again, David discovers The Adjustment Bureau changing things. After capturing him, they agree not to erase his mind on the conditions that he tells no one about them and that he agrees never to see Elise again. However, no matter how hard the case workers try, they can’t seem to keep David and Elise apart. Playing members of the Bureau, Michael Kelly and Terrence Stamp are hardened believers in The Plan, whereas Anthony Mackie plays a member of the team who has a soft spot for choice and helps David when the time comes.

With mild religious undertones that are kept largely under wraps, the scenario unfolds with a “love conquers all” optimism that makes up for the film’s lackluster finale. In the third act, a chase sequence leads David and Elise on a mission to appeal The Plan. Thankfully, Nolfi knows better than to introduce his protagonists to the Almighty Office Manager, for fear of some absurd misstep in tone worthy of The Matrix Reloaded. That being said, perhaps he brings us too close to the top, and puts too much of a human face on the otherwise faceless suits in pursuit of our heroes. Furthermore, one can’t help but wonder how much more artistically gratifying the film would have been with the more cynical edge of Dick’s short stories. Nevertheless, Nolfi wraps up the romantic plot with an emotionally satisfying bow.

Shot without much visual panache, The Adjustment Bureau remains a confident and well-executed film by first-time director Nolfi, whose earlier screenwriting credits include The Bourne Ultimatum and Ocean’s Twelve. The look and pace of the film are serviceable, allowing the inspired pairing of Damon and Blunt to stand out, but the technical aspects are wholly recessive and unmemorable. With a few adjustments of its own, namely some memorable visual elements, this could have been a great movie instead of a good one. As is, the result takes the highbrow concept of Free Will vs. Determinism and through it delivers a romance that has more resonance than any other from recent memory.