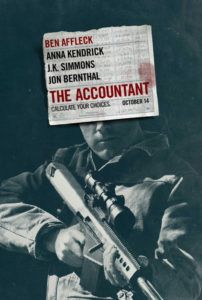 The Accountant tries to be many things at once, perhaps because its protagonist is many things at once. Ben Affleck plays bookkeeper Christian Wolff, who “uncooks” the books of various unsavory criminal types and multi-million-dollar corporations. Living with a high-functioning form of autism, the character’s developmental disorder makes him a mathematical genius, though his condition affords other benefits as well. Namely, the recent Batman actor serves as a well-funded, well-trained vigilante who secretly usurps his most disagreeable clientele. Whether Wolff uses his martial arts training and expert marksmanship (he went to the same school of badassery as John Wick), or merely his belt, the character’s autism has turned him into an emotionally distant accounting and fighting machine. And given all this, The Accountant contains several ongoing and not-always-congruous strains.

The screenplay by Bill Dubuque (The Judge) feels as though it was adapted from a source novel, except it was not. The film has a way of taking segues that would seem to indicate the beginning of a new chapter. Early scenes and periodic diversions into Wolff’s troubled upbringing suggest notes of a character study. But The Accountant also contains elements of a quirky rom-com, a violent shoot-em-up, a corporate espionage whodunit, and even an after school special about the potential for autistic children to become productive members of society. Somehow, director Gavin O’Connor (Warrior) delivers each of these often-incompatible tones with formal composure. However, as a whole, these ideas never quite congeal in a satisfying way. If not for its talented roster of actors and the confident technical skill of the production, the film might be entirely laughable.

Fortunately, Affleck delivers a compelling performance in quieter scenes; he’s bookish and reserved, but also peculiar. Behind thin-rimmed glasses and a blank-faced expression, Wolff stands as a socially awkward genius with a number of behavioral tics. We see occasional flashbacks to Wolff’s childhood, where his army colonel father (Robert C. Treveiler) tries to prepare his two sons for the world through a cruel regimen of martial arts. Meanwhile, in the present day, Wolf leads an austere and highly routine-based life. At his modest, undecorated home, he goes through the necessary motions to keep his disorder in check. But then, he also maintains a storage space with a trailer inside, and in the trailer are piles of weapons, cash, and other forms of currency, like an original Renoir painting or a copy of Action Comics issue #1. Elsewhere, Wolff takes a job to find a monetary leak in the ledgers of a billion-dollar robotics company headed by John Lithgow. On the job, he reluctantly befriends a cute employee, Dana (Anna Kendrick), who identified the accounting discrepancies.

As the auditing plot proceeds, the film veers off in several other directions. A retiring Treasury Department director (J.K. Simmons) recruits young Agent Medina (Cynthia Addai-Robinson) to investigate a mysterious figure known only as “the accountant”. Medina, a character who spends most of her time picking up breadcrumbs, finds her target does more than clean the books of some questionable international businesses; he’s also a highly skilled killer. Periodically, we see more flashbacks to Wolff in prison alongside Francis Silverberg (Jeffrey Tambor), a mob accountant-turned-informant—but these scenes fail to explain why Wolff is in prison (yet more expository flashbacks clarify that later). And then there are scenes involving a brash assassin (Joe Bernthal), whose storyline remains seemingly unconnected (but no less predictable) until the final scenes.

Although it’s tempting to forgive the film’s structural zig-zagging, the ludicrously convenient twists and questions spoil its overall effect. Who is the British-accented voice on Wolff’s phone that gives advice and creates new identities for him? How does Wolff, a decidedly moral figure, reconcile helping some criminal clients while killing others? How has the underworld, whose shady patrons pass Wolff from one criminal enterprise to the next, not realize that they’re each being taken down after they hire him? By the time the would-be revelatory plot turn arrives during the climactic shootout, The Accountant has gone in a lot of different directions and doesn’t come together as a satisfying whole. Perhaps this is because the film cannot decide if Wolff is a hero or a criminal. It might be tempting to argue Wolff simply is, but there’s a lot of discussion in the screenplay, mostly from Dana and Medina, about the moral implications of our protagonist’s actions. And by the time the film settles on a discussion of autistic children, we’re left wondering if there’s any consistent message.

Nevertheless, there’s much to admire here. I enjoyed the scenes where Wolff, who runs a personal accounting practice in a small town, helps an old couple on a farm in exchange for the chance to shoot his high-powered rifle on their land. The subtle romantic chemistry between Affleck and Kendrick works well, despite their subplot being either underdeveloped or completely unnecessary. Affleck’s performance shows polish, as he underplays the everyday signs of his character’s condition, but also unleashes fury in the curious scenes where Wolff acts out in a very controlled, 20-minutes-a-day heavy-metal rage. But structurally, The Accountant is a mess. And yet, each individual component proves fascinating. The trouble remains that O’Connor and editor Richard Pearson piece together the film’s many parts in a disjointed way. Maybe there are too many parts; maybe it’s just that their structure is the problem. In any case, the film feels jumbled, but mildly enjoyable.