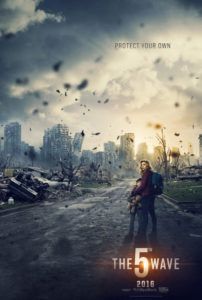 Adapted from Rick Yancey’s 2013 best-selling novel, The 5th Wave begins yet another franchise where teenagers’ melodramatic lives blend with a sweeping science-fiction backdrop. The story consists of the adolescent longings of a teen girl set against a familiar alien invasion scenario. Of course, the teenage girl achieves desirable independence from her parents in the process of saving the world, too. What’s not to like if you’re a thirteen-year-old schoolgirl? Strains of other material have been blended into Yancey’s source text and the film’s script (by Susannah Grant, Akiva Goldsman, Jeff Pinkner), so the $38 million production feels familiar in the same way as the Divergent series and the humdrum Maze Runner franchise. Except for Suzanne Collins’ Hunger Games trilogy and the quartet of excellent films it made, these derivative YA stories, riddled with post-apocalyptic battles and love triangles, feel interchangeable, like they’re all drawn from the same grab-bag of ideas. The 5th Wave does nothing to set itself apart from this hodgepodge.

Director J Blakeson follows his excellent, small-scale British thriller The Disappearance of Alice Creed (2010) with this Sony Pictures release, which bears more than a few similarities to novelist Stephenie Meyer’s The Host, made into a supremely underwhelming film in 2013. The first half-hour breezes over some major events in the story’s world; specifically, we learn about the first four waves of an invasion by an alien race (called “the others” by humans). Chloe Grace Moretz plays our narrator and protagonist, Cassie, who recounts the movie’s first forty minutes from her diary. She lived the good life in Ohio with her mom and dad (Maggie Siff and Ron Livingston) and looked over her little brother, later nicknamed “Nugget” (Zackary Arthur). Things changed, as they usually do, after a spacecraft appeared in the sky and the alien inhabitants launched a series of waves to rid the planet of human beings. (It’s best not to think about why the one alien spacecraft spends so much time hovering over Ohio.)

The craft sent out an electromagnetic pulse and took out the power (1st Wave), then the world was rocked by earthquakes (2nd Wave), followed by an avian super-flu (3rd Wave), and then a ground invasion (4th Wave). All of this monumental tragedy and disaster is condensed into an extended prologue. Quickly establishing that “Nowhere is safe,” the survivors of Cassie’s hometown are greeted by a military force led by Colonel Vosch (Liev Schreiber), one of those military types who you know is up to something sinister. He wrangles up the children from a survivors’ camp and takes them to a nearby air force base for protection, while the parents lead a protest that becomes violent and ends in bloodshed. Cassie alone escapes, soon to be rescued by one of the film’s two resident hunks, jeans-and-flannel woodsman Evan Walker (Alex Roe). With Evan by her side, she sets out to rescue Nugget from Vosch. You can bet there’s smooching to be had by a campfire, as well as an obligatory scene where Cassie catches Evan bathing in a lake as she watches from behind trees.

The film crosscuts between Cassie and Evan heading for the air force base and Nugget’s fate. Recruited into a child military outfit, Nugget trains alongside his sister’s high school crush, football jock Ben (Nick Robinson, from Jurassic World). Vosch and his cronies (among them Maria Bello in an underdeveloped role) tell the child soldiers that they’re going to war with the “others”—something like the mind-control parasites from Robert Heinlein’s The Puppet Masters, the spidery creatures can hide inside humans. (There’s certainly an Invasion of the Body Snatchers element here, except the aliens don’t point and scream when identified. They don’t do much of anything, really. They’re quite boring, as aliens go.) Ben leads a unit that includes the goth rebel Ripper (Maika Monroe, from It Follows and The Guest) and Dumbo (Tony Revolori, from The Grand Budapest Hotel), all of whom realize Vosch is using them. After some predictable twists, Ben’s unit and Cassie converge on Vosch’s base in the underwhelming finale.

Once again, Moretz looks far too dolled-up for her role, just as she did in the 2013 remake Carrie. Despite fighting aliens and living in the woods, Cassie somehow manages to maintain a clear complexion with plenty of concealer and eyeliner. At least Katniss Everdeen had the excuse that she needed to look made-up for the Capitol cameras; however, there are no cameras following Cassie. More likable and appropriate looking is Monroe, who’s far better in the aforementioned indie thrillers, yet brings some much-needed attitude here. By contrast, Cassie is a dull character, and Moretz has little more to do than appear scared, worried, or confused—all rendered with the same expression on her face.

This film is devoid of danger because the threat never feels real. The aliens never appear onscreen, at least not in any tangible way; they’re realized via bad CGI and only when spied through infrared-esque visors. But then, Blakeson’s entire production looks cheap and rushed, with laughably bad special FX in a few places, particularly in the disaster sequences during the prologue. And if other franchise-starters are any indication, Sony hopes to profit from the lower budget of The 5th Wave to justify adapting the two other sequels in Yancey’s trilogy, The Infinite Sea the yet-unpublished The Last Star. Expect at least two other movies, if not three. Hollywood has turned the whole YA dystopia thing into an event culture where teen viewers buy a ticket just because it’s the thing to do. As a result, we’ll be seeing Moretz and company battling aliens for years to come.