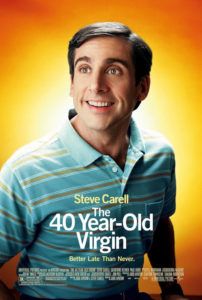 Every so often, something like The 40-Year-Old Virgin comes along and changes the way movies are made for a short while. In this case, the film, spawned from wunderkind producer Judd Apatow, led to an influx of smart, affecting, and sexually graphic comedies after its 2005 release. Along with them came the popularization of actors Steve Carell, Paul Rudd, Seth Rogen, Jane Lynch, and even Apatow himself, who earned the reputation as comedy’s most dedicated and respectable supporter. And he deserves it, given his packed resume since his emergence in the mid-1990s.

Developing several short-lived-but-great television programs, Apatow brought us The Ben Stiller Show, The Critic, Freaks and Greeks, The Larry Sanders Show, and Undeclared. He backs almost every Will Ferrell film project and himself helms the occasional movie like Knocked Up. But with this, his feature directorial debut, he and co-writer Steve Carell conceived the idea behind The 40-Year-Old Virgin and established a subgenre of knowing sex comedies that actually have lessons behind them, and not just mere exploitative sexual humor—instead, he ironically finds a marriage between the two.

Carell plays Andy Stitzer, a lonely introvert who maintains a small apartment filled with videogames and comic book shop collectibles (better known as action figures, still in their original packaging no less). He works in the stock room of an electronic chain store called “Smart-tech,” where his coworkers think his quietness means he’s a serial killer. One night, they need one more player for their poker game, so they ask Andy to join. Being guys, they question him about his sexual conquests. Not knowing what to say, Andy confesses he’s never been with a woman. From thereon out, his friends do everything in their power to make sure Andy’s virginity doesn’t last.

But this isn’t an easy issue for Andy. As much as he wants to finally have sex, he respects women perhaps too much to expose himself to them. His friend Jay (Romany Malco) warns, albeit indelicately, “You’re putting the pussy on a pedestal.” He suggests Andy make up for lost time on “drunk bitches.” Another friend, Cal (Seth Rogen), suggests talking to women and asking questions but also resolves that Andy should get some practice on easy prey. David (Paul Rudd) thinks love is the answer, but that’s mostly concerning his own break-up from two years ago that he’s still stewing about. And then there’s Andy’s boss Paula (Jane Lynch), who proposes that they become friends-with-benefits (she words it differently). Andy politely declines.

So what prevented Andy from having sex? Bad luck, fear, the usual. And what does sexual experience have to do with true love? That’s what Andy would like to know when he meets Trish (Catherine Keener), a too-good-to-be-true woman who runs an eBay business. They begin dating, and he does everything he can to postpone The Act, except for telling her the truth. Of course, there’s a rather apparent metaphor lining the script about Andy being just like one of his hermetically sealed action figures. Well, by the end of the film, rest assured Andy breaks out of his packaging and celebrates the experience with a hilarious performance of “Aquarius/Let the Sun Shine In” from Hair.

What proves most affecting is how sweet and afraid Andy remains about the whole process. When he accompanies Trish’s teenage daughter (Kat Dennings) to get birth control, there’s an information awareness group where Andy asks questions best suited for a 13-year-old (“Is it true that if you don’t use it, you lose it?”). Though unbelievable that Andy wouldn’t have found himself something on the internet or in an anatomy book to steer his unawareness, these moments are wonderfully charming. Carell’s dedication and believability in his role make such scenes perfect; no work he’s done since compares. And he even looks the part of an awkward loner—just one glance at the movie poster and you know, he’s a virgin. Now that’s acting… I hope.

Somewhere in the realm of Steve Martin and Woody Allen, there’s a wit about the screenplay, which manages to be packed with horrible language and dirty references galore, but also a more authentic romance that your traditional rom-com. Think Roxanne meets Everything You Always Wanted to Know About Sex *But Were Afraid to Ask. Apatow has found a way to blend heart and raunchy humor in true-to-life comedies that don’t need to rely on sight gags and gross-out shocks to be funny—The 40-Year-Old Virgin defined this movement. The movie is about characters as real as you or me; they talk like us and react like us, so we feel included in the group. And despite the constant tangents weighted by explicit-if-true dialogue about sex, Apatow imbues some impressive and rewarding commentary about creating healthy relationships. How often can a sex comedy claim that?