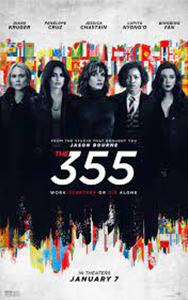 Most reviews of The 355 would have you believe that it commits significant crimes against moviegoers. I suspect that’s because it’s the first major release of 2022, a distinction usually reserved for disposable genre fare and studio throwaways meant as counterprogramming against the season’s influx of Oscar contenders. Shadow in the Cloud (2021), The Grudge remake (2020), and Escape Room (2019) each started their respective years with a critical whimper. If you keep going back, almost every year begins with a bad movie, and critics have grown accustomed to the trend. So now, predisposed critics use the occasion to unleash heated tirades and cruel dismissals of the year’s first movie. I’m certainly not immune to the phenomenon. But this tendency of critical repudiation exaggerates the badness of The 355, a movie that’s less an abysmal failure than a mediocre effort that’s watchable mainly because of its exceptional cast. Sure, the difference between a minor misfire and a miscarriage of cinema is a trivial distinction. But it’s worth making if only to avoid the typical brand of meanness that accompanies many first-of-the-year reviews.

For students of American history, “The 355” is the codename for a Revolutionary War spy, a woman in George Washington’s Culper Ring whose real-life identity remains a secret to this day. But really, that’s just a cool name for an actionized spy yarn about female secret agents from various countries teaming up to save the world. The title isn’t really significant to the story (which, if Tarantino made it, might be called “Fox Force Five”). It’s grittier than either version of Charlie’s Angels, and it has a better cast too: Jessica Chastain, who pitched the concept to her Dark Phoenix (2019) director Simon Kinberg, stars as the CIA’s no-nonsense agent Mace. Lupita Nyong’o plays Khadijah, the MI6 tech wiz. Diane Kruger is a hard-nosed German agent with daddy issues named Marie. From Colombian intelligence, Penélope Cruz plays Graciela, a therapist with no field experience. And later in the proceedings, Fan Bingbing appears as Lin Mi Sheng from Chinese State Security.

Kinberg directed and co-wrote (with Theresa Rebeck) the knock-off script, which, given his credits spanning from XXX: State of the Union (2005) to many of Fox’s beleaguered X-Men movies, doesn’t bode well for The 355. The plot has been ripped from many Mission: Impossible movies, where intelligence agencies turn against their agents, who go rogue (or engage “Ghost Protocol,” if you prefer) to prevent a super-weapon from getting into the wrong hands. Here, the MacGuffin is an internet “master key” that can access any file, account, or encrypted system. The user can turn off a plane’s power mid-flight or shut down the reactor on a nuclear power plant. The globe-trotting scenario leaps from Bogotá to Paris to Morocco to Shanghai to prevent World War III, giving our heroes plenty of opportunities for elaborate shootouts and spycraft. They face a range of criminal types as well: Édgar Ramírez is underused as an agent trying to sell the device; Jason Flemyng’s criminal dealmaker finds his plans thwarted by the hero spies (“I want those women dead,” he grumbles like a Bond villain); and Sebastian Stan goes from Chastain’s partner and love interest to a turncoat. 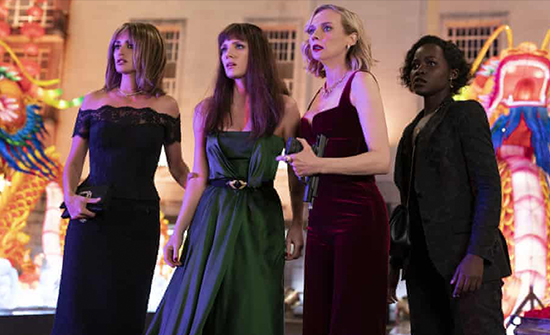 The 355 boasts action—shot by cinematographer Tim Maurice-Jones, edited by John Gilbert and Lee Smith—in the Paul Greengrass method of shaky cameras and quick cuts in service of kineticism. Unfortunately, Kinberg doesn’t quite have the style down. It’s not that his approach is offensively incompetent or unintelligible, like a Michael Bay movie; it’s that Kinberg tries to approximate entries in the Mission: Impossible and James Bond series instead of creating his own thing. It feels like the production has no greater ambition than supplying a female-centric version of the same old male-dominated spy actioner. Granted, casting women in traditionally male roles is a step toward equal representation in the genre, but a truly progressive step would be to carve out a feminist alternative that does more than build upon established archetypes. Frankly, I don’t know what that looks like, but that’s because it hasn’t been invented yet—every Salt (2010) or Atomic Blonde (2017) just feels like a John Wick or James Bond movie by another name.

With the action serviceable and the plot conceived from a grab bag of spy tropes, the cast is the sole reason to see The 355. They elevate every moment and make the two-hour runtime palatable. Chastain, versed with the genre after Ava (2020), and always a welcome screen presence, demonstrates her commitment in several hand-to-hand combat sequences. The same goes for Kruger, whose scrappier character plays like a hard-boiled detective. Nyong’o and Cruz have more to do on the emotional spectrum, especially during a shocking, effective sequence that involves their respective families threatened at gunpoint. Though, Cruz stands out with scenes of comic relief, seduction, and many moments of feeling out of her depth as a therapist among spies. By contrast, Fan has the least to do, shining only in a late action sequence. Still, each performer manages to create the illusion that there’s something more to their character than the script provides.

Near the end, Fan is saddled with the line, “We might look different, speak different, but we are the same.” The line over-articulates the movie’s agenda: female solidarity in a movie with exclusively male antagonists; women taking parts usually assigned to men; women across cultures coming together for a common cause. They’re all commendable ambitions, to be sure. But the film doesn’t have anything engaging or profound to say about gender politics. Instead, The 355 is content being a female-starring alternative to well-worn hypermasculine material. That alone should not earn the movie scorn—only disappointment that this exceptional cast wasn’t given a better script. The movie has all the potential of being unchallenging escapist entertainment, but it’s all too familiar to distinguish itself.