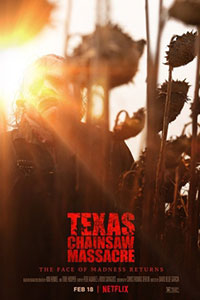 Tobe Hooper made The Texas Chain Saw Massacre in 1974, and it still feels like something we’re not supposed to be seeing. Hooper’s unhinged perspective delivered something unsettling and singular. Hooper knew he couldn’t repeat the original when The Cannon Group approached him about a sequel, The Texas Chainsaw Massacre Part 2 (1986). What would be the point? So, he went metatextual and turned his follow-up into the blackest of satires, leaning into the material’s much-studied symbolism and turning the original on its head. Thus, everything that needed to be said about the chainsaw-wielding Leatherface, cannibal families, and yuppies voyaging into the Texas backwoods, Hooper said it from a modern and post-modern approach. Everything that came later is just Hollywood banking on the moneymaking potential of the movie maniac Hooper created. In the years since, seven movies have tried to capitalize on the legacy of Hooper’s original two. Sequels, reboots, origin stories, and now, a retconned sequel—or a requel, to use the parlance of our times.

The latest entry, titled Texas Chainsaw Massacre, positions itself as a direct sequel to Hooper’s original, following the example set by David Gordon Green’s 2018 requel, Halloween. Green’s film imagined that the survivor of Michael Myers’ killing spree in 1978 became a rugged, traumatized, yet battle-ready militant bent on taking down her oppressor. Coupled with a committed performance by Jamie Lee Curtis, it was a novel idea. Screenwriter Chris Thomas Devlin replicates that idea for Texas Chainsaw Massacre, working from a story by Fede Álvarez and Rodo Sayagues (who made another reboot, The Evil Dead, in 2013). Copying Green’s concept, the new movie, which debuted on Netflix, brings back Sally Hardesty, the survivor of the 1974 film. But, alas, Marilyn Burns, who played Sally, died in 2014, so the filmmakers recast her with Irish performer Olwen Fouéré, a sinewy presence with hardened eyes and leathery skin.

Unfortunately, the scenario doesn’t make much use of Sally. (Perhaps now is a good time to warn you, there will be spoilers throughout this review.) She’s the resident Dick Halloran from The Shining (1980)—introduced early in the proceedings as a possible solution to the bloodshed. She’s given one or two small scenes to show her journey, only to be unceremoniously disposed of when she faces off with Leatherface. After all, the movie runs for just 81 minutes. There’s no time for pesky character development or convincing human behavior. There’s a body count to compile, courtesy of Melody (Sarah Yarkin) and Dante (Jacob Latimore), two social media influencers who buy Harlow, a Texas ghost town, with plans to revitalize the area for hipster creatives. Along with Melody’s sister Lila (Elsie Fisher), a traumatized school shooting survivor, they drive across Leatherface country to Harlow, where they plan to host a pitch party for a busload of anonymous investors. 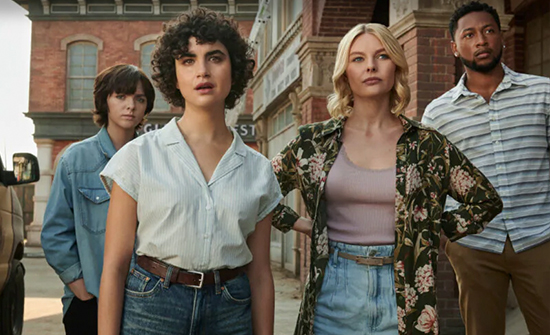 If Hooper’s film felt like a group of unknowns in the middle of nowhere, shooting under punishing conditions to create something utterly deranged, then director David Blue Garcia manages to make every moment of Texas Chainsaw Massacre feel populated by artificial actors and set pieces. None of it looks or feels authentic. Instead, it seems like any other average horror movie of today, if capably shot (by cinematographer Ricardo Diaz) and cohesively assembled (by editor Christopher S. Capp). Along with the conventional aesthetics, the actors seem to be performing instead of being. When Melody and Dante investigate the seemingly abandoned Harlow orphanage that still waves a confederate flag, they find an older woman, played by well-known genre icon Alice Krige—whose presence reminds us that we’re watching a movie. Convinced that they own the entire town, our idealistic heroes call the police and evict the older woman, but she dies from a heart attack after the altercation. As it turns out, her towering son is Leatherface (Mark Burnham), and her death gives the maniac every excuse to break out his chainsaw and take revenge on the human fodder.

Texas Chainsaw Massacre is an exceedingly bloody movie. Horror fanatics will note the “good kills.” But if Hooper’s film is the standard, it’s worth noting that he frightened us by showing little actual gore and letting our imagination do the work. Garcia prefers an over-the-top approach, heavy on the dismemberments and disembowelments. One sequence features Leatherface entering a party bus filled with hipsters and blue light. The crowd collectively holds up their phones to Livestream his presence. “You’re canceled, bro,” says one of the soon-to-be victims. The movie’s contempt for youth culture is palpable, and its social commentary is trite. Then, Leatherface unloads thirty years of repressed rage, cutting through the screaming crowd in a spraying spectacle. The sequence might produce a few audible reactions, but it’s a hollow experience that attempts horror one-upmanship—a trend among horror filmmakers who try to out-gore each other. But none of the bloodshed proves memorable; rather, the scene where raw sewage pours over one character earned the biggest reaction out of this critic.

On the periphery, the filmmakers conceive thin characters and even thinner arcs for them. Finally, the story settles on the sisters, Melody and Lila, as our central heroes who must battle Leatherface. Melody is the sort of character who hides in a closet and under the bed, so she’s doomed. More interesting is Lila, if only because of Fisher’s evident talent (see 2018’s Eighth Grade). The setup becomes a device for Lila to overcome her trauma—cue flashback to her school shooting experience—by not running away from what frightens her. Before long, she masters her fear of firearms to confront her demon in a predictable dramatic arc that, in the end, literally pulls her away from the confrontation in a self-driving car. The character feels like a Screenwriting 101 construction, albeit given dimension by Fisher’s performance—not that the filmmakers allow Fisher or any other actor much time to make their roles memorable.

The filmmakers have whittled Texas Chainsaw Massacre down to its barest form. Sure, Hooper’s original was short as well, but its 83 minutes did more to establish the dynamic between its five characters. Here, the setup feels like obligatory character building by horror-savvy filmmakers who are more interested in piling up the corpses. Gone is any interest in Leatherface’s cannibalism or how a dwindling economy and poverty led his family to that choice, rendering them almost sympathetic. In its place, Leatherface is a juggernaut compelled by revenge, killing anyone and everyone in his path. Garcia’s direction may be visually competent, but his storytelling is downright vacuous. Texas Chainsaw Massacre is another in a long line of empty experiences from this franchise, which has never left an impact outside of Hooper’s contributions.