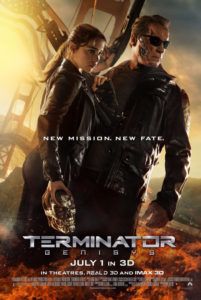 Like a killer cyborg powered by an Energizer battery, the Terminator franchise just keeps going and going. Terminator Genisys is the second attempt at a reboot of sorts. It overlooks the failed last entry, McG’s Terminator: Salvation, which sought to restart the series with Christian Bale and Sam Worthington starring, but minus star Arnold Schwarzenegger. And just as buzz about that 2009 release suggested a planned (but never-to-be) trilogy was in the works, the press around Genisys, along with a last scene promising there’s more story to be told, hint there are further sequels on the way. Whether we ever see follow-ups to Genisys depends largely on audiences, if the fans want another film, and if they show up in theaters. To ensure box-office success, the filmmakers have once again caged the visceral nature of the series within a PG-13 rating, allowing teenage crowds to attend. In exchange, the film overcompensates with plot, and lots of it, throwing assorted Terminator variations at the audience and ushering them along with half-baked time travel logic.

Screenwriters Laeta Kalogridis and Patrick Lussier borrow J.J. Abrams’ Star Trek (2009) reboot approach by hitting rewind and starting over, using the plot device of time travel to facilitate a new storyline (or timeline, rather) out of iconic characters. As such, the story relies heavily on James Cameron’s originals, The Terminator (1984) and Terminator 2: Judgment Day (1991), while Jonathan Mostow’s Terminator 3: Rise of the Machines (2002) remains conspicuously unreferenced. In fact, they go back even farther than the original 1984 film for some new twists on the material. But rather than using slick writing and thoughtful consideration of temporal paradoxes, director Alan Taylor propels his film forward in typical Terminator fashion—with relentless and entertaining action, but nary a brain in its head. Genisys proves the franchise has run its course and has few fresh ideas, but it can still offer a few thrills. Or as Schwarzenegger’s cyborg quips, “I’m old, not obsolete.”

The story begins with familiar images of a scorched, post-apocalyptic future where humanity fights killer robots. The machines of Skynet have been all but destroyed by the scar-faced human resistance leader, John Connor (Jason Clarke). In the opening sequence, John leads his troops, among them his right-hand man Kyle Reese (Jai Courtney), to a Skynet facility for the final battle. The humans win, but before Skynet dies, it sends a T-800 model Terminator back to kill John’s mother. John sends Kyle back to save her. Kyle and Sarah are also supposed to produce a child that will grow into the future’s resistance leader, John Connor. Temporal paradoxes aside, this is normally where The Terminator begins, except at the last moment, Reese sees a brooding soldier (Matthew Smith) begin to glow and grab John. At that moment, Kyle is dropped into 1984. But it’s hardly the 1984 that audiences will remember from Cameron’s original film. 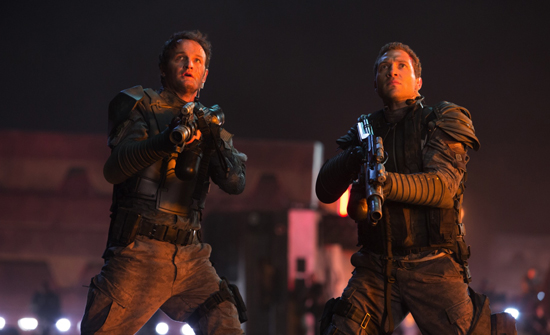 Playing in charted territory the way Back to the Future Part II did with its predecessor, Taylor and his production designer Neil Spisak recreate the look and feel of Cameron’s The Terminator for these scenes, as a younger-looking Schwarzenegger appears in a familiar dank, trash-strewn alleyway, having arrived naked in an electric time bubble from which he stands, looks around robotically, and then gazes over Los Angeles. But before the hunter-killer T-800 can even gather clothes from a familiar brand of 1980s punks, he’s confronted by yet another, older-looking T-800 (also Schwarzenegger). In this timeline, a different Terminator was sent back to protect Sarah Connor (Emilia Clarke) at the age of nine and has raised her. She even calls him “Pops”. Now she’s tough as nails and doesn’t need protecting. It’s a head-spinning notion for Kyle, who shows up in 1984 but finds himself hunted by a liquid metal T-1000 (Byung-jun Lee, looking very much like a South Korean version of Robert Patrick), only to be rescued by Sarah, the person he was supposed to be saving.

Don’t try figuring out when or who sent the T-800 back to Sarah’s childhood, or who sent the T-1000 back to 1984. The script doesn’t explain and, frankly, it wouldn’t make any sense even if the screenwriters had tried to apply temporal logic. The film hints that the answers to these questions are secrets left to uncover in future sequels. At any rate, the Terminator franchise has always been about nonstop action, as opposed to even the slightest scientific theory—after all, if the series played by its own mythology’s rules, there would be no reason for any sequels after Terminator 2: Judgment Day. Still, here we are, five films in, and the storyline still doesn’t make much sense. Fortunately, Taylor concocts a few diverting action sequences, including the scenes in 1984 and a chase on the Golden Gate Bridge. But the best stunts are accomplished with CGI, whereas Cameron achieved his most impressive car chases and shootouts using practical effects, which is perhaps why the originals remain thrilling.

But wait, there’s more plot to discuss! Once our heroes defeat the T-1000 of 1984, Sarah and Kyle time travel to 2017, the date of the altered timeline’s Judgment Day. In this timeline, there is no Skynet; rather, there’s an OS platform called “Genisys” on the verge of launching, and it will eventually take over military computers and launch nukes against the human race (imagine if Samantha from Her suddenly realized humans deserved to be destroyed). In a Looper-style fade, Kyle now has two sets of memories—one from his original timeline, one from the altered timeline. It’s all very confusing, especially when John shows up in 2017 and tries to kill everyone, himself now transformed into some kind of unbeatable, pseudo-liquid, under-clarified Terminator model. Trying to wrap your head around what’s happening and why isn’t recommended for Terminator Genisys. The characters stand around and talk endlessly about altered realities, uncertain futures, and “Nexus points” to no end, and Schwarzenegger’s Pops always adds “theoretically” for comic effect. Meanwhile, the accompanying action scenes rarely have anything to do with these time travel debates, and the characters often give up on trying to understand anyway, saying “It makes my head hurt.” 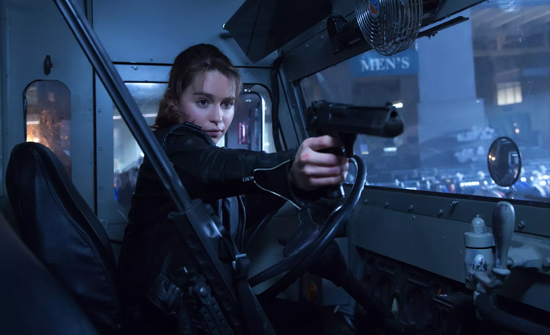 As for the actors, the casting is hit-and-miss. Remember how Hollywood touted Sam Worthington as the next action star, but drivel like Terminator: Salvation proved only that his appeal is limited unless he’s under CGI disguise in Avatar? Well, Terminator Genisys is the latest attempt by Hollywood to make an action star out of Jai Courtney (A Good Day to Die Hard, Divergent), but he makes even less an impression than Worthington. Neither actor has much charisma, nor can they hold a candle to the original’s Reese, Michael Biehn. Even Anton Yelchin, who played Reese in Terminator: Salvation, is more affable. Emilia Clarke (usually seen with blonde locks and commanding dragons in Game of Thrones) fares better as Sarah Connor, still a rebellious twentysomething, but hardened by her T-800 guided upbringing and resentful toward a predestined life (birth, military training, procreating with Reese, birthing the savior of humanity, death). Her scenes of parental acknowledgment toward her “Pops” are affecting, even if the screenplay underdevelops the role of Schwarzenegger’s character.

And speaking of Ah-nuld, the former California governor gives his most lively post-politics performance here, despite the script saddling Pops with repetitious comic relief. The lines “theoretically” and (of course) “I’ll be back” are less annoying than the Terminator’s forced, awkward smiles. This hammy shtick is unfunny, inciting eye-rolls instead of laughs. Schwarzenegger remains most effective when his character offers small hints that he’s grown to love Sarah Connor as a daughter. But the standout character hasn’t been mentioned in this review yet. Recent Oscar-winner J.K. Simmons plays a cop who, after seeing Sarah and Reese as a young man in 1984, becomes obsessed with time travel and robots. When he sees them again in 2017, and they haven’t aged a day, he’s convinced his crackpot theories are correct and resolves to help. Simmons brings his good-humored supporting actor charm to the role.

Small pleasures like Simmons and a spirited turn by Emilia Clarke are the reasons to see Terminator Genisys. But don’t expect any clarity. There’s no sense in anything happening onscreen, no seamless way it fits into the franchise’s mythology. (For example, wouldn’t Sarah and Kyle’s leap from 1984 to 2017 mean that John Connor isn’t born when he’s supposed to be, therefore allowing no resistance leader if Skynet survives?) Regardless, it exists because the screenplay said it does, not because the previous films left a hole. Like many entries in the series, Genisys replaces strong storytelling with fast-paced chases, explosions, shootouts, and special FX. For many viewers, such mindless qualities have been enough to sustain the Terminator films for over thirty years. Others will see Genisys as a step up from Salvation, and arguably Rise of the Machines, but hardly an essential piece of the ongoing saga (there hasn’t been one of those since 1991). Aside from all the unanswered questions left by the film, the burning issue remains how audiences will react. Will they care about the new timeline Taylor and company have created? Frankly, despite the film being successful as a mild diversion, it might be best to travel back even further and start over. Again.