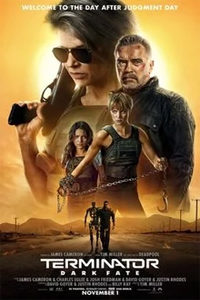 Another retconned franchise, another ill-advised attempt to capitalize on an intellectual property well past its prime. From Superman Returns (2006) to last year’s Halloween, major studios have ignored the maligned sequels of the past by simply denying their existence. When neither the filmmakers nor the fans like several chapters in an ongoing saga, Hollywood has resolved to tear out the unwanted pages and write their own stories. And when that doesn’t work, they tear out the new pages and start again. Terminator: Dark Fate presents itself as a direct sequel to James Cameron’s originals, The Terminator (1984) and Terminator 2: Judgment Day (1991), ignoring the three failed sequels that followed. After Terminator 3: Rise of the Machines (2002) and Terminator: Salvation (2009) tried to follow Cameron’s work with a belated sequel and a prequel, respectively, the franchise most recently tried to relaunch using the plot device of time travel and alternate realities with Terminator Genisys (2015), a forgettable entry that was attempting to do much of what Dark Fate hopes to achieve for the continuity. The latest entry ignores everything after Judgment Day and proceeds from there, but it’s no less confusing for its muddled timelines and narrative incoherence.

The story, attributed to three screenwriters and four writers with “story by” credit, presses the reset button in the first scene and also creates a nonsensical plot ripple. It opens with Sarah Connor (Linda Hamilton) circa 1998, who has retired to a tropical vacation spot with her son, John (Edward Furlong), the would-be savior of the resistance against Skynet. Both of them appear in convincing de-aging CGI, and given the events of Judgment Day, neither of them should have to worry about Skynet or Terminators ever again. Inevitably, a random Terminator (Arnold Schwarzenegger) appears out of nowhere and blows John to smithereens, and Dark Fate transitions so quickly that the viewer barely has a moment to process the trauma of what has just happened. In an instant, this scene disposes of every sequel that followed, allowing that gaggle of writers to concoct whatever scenario they want. Rather than feeling inspired by the adage “necessity is the mother of invention” and working within the confusing timelines established over five movies, Dark Fate prefers to topple the sandcastle, grab its beach pail, and start rebuilding. 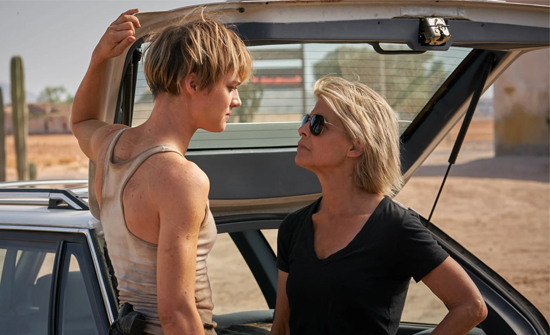 And yet, for much of the first half, Dark Fate plays like a remake with the writers following the basic scenario of Cameron’s entries. Resituated in 2019, we follow a blue-collar Mexico City factory worker named Dani (Natalie Reyes) about her day, unaware that she’s being stalked by a shape-shifting Terminator (Gabriel Luna), a Rev-9 model with a liquid metal exterior over a hardened robotic skeleton—two Terminators in one package. Fortunately, Dani is intercepted by Grace (Mackenzie Davis), a fierce soldier sent from 2042 to protect her. Grace is human, but she’s also “an augmented super-soldier” with heightened speed, agility, and metabolism, requiring her to refuel with meds and water occasionally. In this familiar plot trajectory with a few adjusted details, there is no Skynet, only an artificially intelligent cyberwarfare program called Legion that has brought about the robot apocalypse in Grace’s future. Oddly enough, even though Legion is an entirely different AI, the “dark fate” of the title suggests that genocidal programs will inevitably invent killer robots, call them “Terminators,” and try to dispose of the human rebel leaders using time-travel. And for some reason, Dani accepts all of this without much argument or complaint.

Director Tim Miller, best known for helming Deadpool (2016), doesn’t bother developing characters or emotional situations. After a few minutes of screentime, just enough to establish the who, what, and when, Dark Fate launches into a series of action scenes over-edited by Julian Clarke. Whereas Cameron took his time to establish his characters and the stakes, Miller leaps impatiently into a fight between Grace and the Rev-9 on a factory floor. With this, it becomes apparent how much the filmmaker will rely on cheap CGI to propel his action. The Rev-9, played with uncharismatic and unintimidating presence by Luna, leaps about like Spider-Man, crawling up walls and bouncing off platforms with rubbery computer-generated artificiality. There’s no substance or tactility to the character, neither in his blank-faced expression nor the lack of impact when the CG-animated baddie lands on the ground in a generic superhero pose. Alternatively, the viewer remains aware of Grace’s physicality, her weight and musculature impressively played by Davis. And though Miller attempts to replicate the material energy of Cameron’s filmmaking with an early car chase sequence, many of the movie’s remaining action scenes look like nothing more than digital spectacles, flat and unengaging.

Inevitably, Dark Fate becomes a nostalgia trip when Sarah Connor, now a grizzled fugitive who swears like a sailor and travels with a small arsenal, joins Grace to protect Dani. Connor professes her Terminator-killing authority, but she’s outmatched by Grace’s strength, creating a forced conflict between the two untrusting bodyguards. Dani, meanwhile, remains a dull presence on the periphery, barely coming alive until the climactic action sequence. As the all-female cast of heroes engages in obligatory exposition, complete with flash-forwards to Grace’s oddly familiar future, it becomes apparent that none of the characters prove very interesting. They behave like boxes checked on the list of necessary items to include in another Terminator sequel. Another soulless entry is the inevitable presence of the old T-800 Terminator (Schwarzenegger) from an obsolete timeline, now living a quiet life under the name Carl and serving as a draperies installer (yes, really). Carl also has a potentially emotional backstory here, complete with a wife and child—established and dismissed in a few lines of dialogue—but they remain unexplored ideas in a movie that wants impatiently to get to the next action sequence. 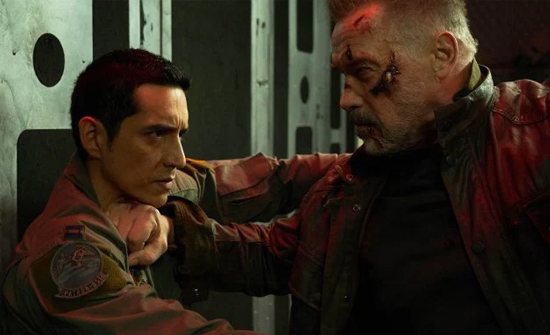 Throwing more characters at the problem doesn’t help Dark Fate; it only cheapens the proceedings. Introducing the top-billed Hamilton and Schwarzenegger into the mix means obligatory, eye-roll-worthy callbacks, from Connor quipping “I’ll be back” with nonchalance to the absurdly-named Carl stating “I won’t be back.” Die-hard fans of the franchise may eat this stuff up, but the shtick has grown tired over the last thirty years. Moreover, the dominant Hamilton and Schwarzenegger distract from the more compelling Davis, whose character is sidelined once everyone else arrives on the scene. At the same time, this is a movie that feigns importance with its progressive cast, religious symbolism, and attempts at social relevance. A sequence set inside the prison-like surroundings of a U.S. border patrol holding facility notes with irony how the caged immigrants aren’t called “prisoners,” they’re called “detainees.” Even though the movie offers a refreshing and distinctly Latino perspective, such flourishes feel inessential to the text, as Dani serves as a plot device more than a fully-formed character.

Terminator: Dark Fate goes on and on, extending from relentless to tedious. At over two hours, it feels bloated in all the wrong places, more concerned with drawn-out action scenes than developing its laundry list of characters. Among the new additions, Reyes and Luna leave no impression whatsoever while Davis feels underused; Hamilton and Schwarzenegger, however, stain the legacy of the earlier movies with Dark Fate’s misguided riffs on the continuity. Miller, who directs with that anonymous touch of factory-produced blockbusters, gains some credibility from Cameron’s stamp of approval—Cameron serves as a producer and receives a story credit, but one suspects that his involvement was limited, included as a marketing ploy to lend the production some name-brand authority. Despite its attempts at legitimacy, Dark Fate follows the same path as the franchise’s long line of misbegotten sequels, reboots, and relaunches. But if this one is another entry that proves entirely forgettable, the viewer can be assured that, in a few years, Hollywood will travel back in time to restart the franchise again.