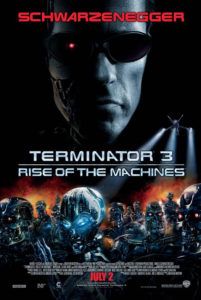 James Cameron is some kind of genius. His large-scale efforts changed how we think of grandiose action movies; his approach is layered with melodramatic themes, snowballing momentum, and always a jealous and sometimes snobbish desire to propel new cinematic technological breakthroughs. Each film is a ride. Examples like Aliens, The Abyss, and Titanic demonstrate this with their crowd-pleasing, eye-popping, jaw-dropping effect. The only problem is, Cameron didn’t direct Terminator 3: Rise of the Machines. The guilty party is Jonathan Mostow, helmer of unremarkable thrillers like Breakdown and U-571. Mostow carbon copies the most basic level of Cameron’s style, making his sequel into a generic version of the real thing, like fan art assembled by an enthusiast. With more “story by” and “written by” credits than my patience can tolerate, the screen scenario doesn’t have that crucial connectivity and progression that a Cameron film would. But that doesn’t mean the result isn’t sorta fun.

Though the machine apocalypse was prevented in the end of Terminator 2: Judgment Day, Hollywood had other plans not contingent on any established mythology. Once again, the savior of the future, John Connor, here played by Nick Stahl, must survive another attack from the future so that he may live and eventually lead a resistance against the machines. Yet again, a “classic” Terminator model (Arnold Schwarzenegger) is sent to protect John from a more modern version, namely the T-X (Kristanna Loken). A combination of the classic model and the T-1000 from T2, she’s a combo package with a robot skeleton covered by liquid metallic alloy. Her arms can turn into elaborate energy weapons and her tongue can identify DNA. And why a woman Terminator? Does she plan to covertly seduce John Connor and then kill him? Nope. There’s no reason for her gender, except for the sex appeal when she arrives naked after time travel.

Though John believes they stopped armageddon, he remains “off the grid,” drifting from place to place. When the Terminator makes contact, he discovers the robot apocalypse of 2029 was not prevented but rather postponed. After randomly running into his junior high school sweetheart Kate Brewster (Claire Danes), with whom he shares recollections of making-out in a classmate’s basement, the Terminator informs John and Kate that they will be married in the future, and that its mission is to get them both to safety before the inevitable nuclear holocaust. Meanwhile, they just survive attacks from T-X, whose mission is to wipe out John and his future generals, most of which are teens working in fast food drive-throughs. 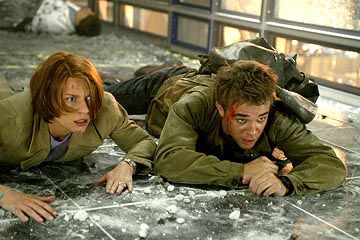 Anyway, it seems there’s a computer virus infecting the planet and the military plans to use Skynet to stop it, and we all know what happens then… But wait, wasn’t Skynet and all its data destroyed in the previous film? Oh, nevermind. Trying to apply accurate time travel logic to this franchise has always been a mistake. The filmmakers would prefer that we lose ourselves in the action, which is easy enough when it hardly slows. Action scenes aplenty tear up the screen, except without their one-after-another connectivity that Cameron might imbue—they’re very episodic. A massive sequence where T-X chases our heroes in a crane truck involves smashing through anything and everything; cars are crushed, buildings are flattened, and it’s all very impressive visually. But the effect on the viewer, aside from an appreciation of the scene’s bigness and loudness, falls flat on every level other than aesthetic. Mostow directs without concern for his own ideas, and instead considers What Would Cameron Do? In turn, we wonder the same thing. The result isn’t poor direction, just clearly not that of a singular voice.

Everything feels just a little off somehow. Jerky head motions similar to Robocop make both the Terminators feel unnatural, more so even than they should; their movements don’t glide in that eerie way that Robert Patrick shifted his head and neck in T2. Stahl makes a fine John Connor who’s finding out what exactly it takes to be a leader, except the absence of mother Sarah, played by the formerly ripped Linda Hamilton, leaves a wild element to the story untapped and therefore lacking. So where did she go? The movie tells us she died of leukemia, which is just depressing on so many levels. To literally write-off her character was a sad mistake by the filmmakers.

Referential to a fault, the film repeats scenes from its predecessors, believing the mild twist on the recipe will be enough to avoid earning a derivative label. It’s not. Consider when Arnold first arrives, naked per usual, he walks into yet another bar to find clothing—this time, it’s a strip club on “ladies night.” The Terminator sizes up the male dancer who is dressed like a biker dude with leather pants and jacket, and when the Terminator asks for his clothes, the response is “Talk to the hand!” That hand is broken. Later, in an attempt at humor, the writers have the Terminator repeat, “Talk to the hand.” Not only was this joke out of date upon this film’s release, but looking back years later, this moment is just embarrassing. That, along with this franchise’s reliance on the “I’ll be back” line in any of its forms, reduces this film to a self-referential cliché.

Redeeming itself in the final scenes, T3 has an impressively cynical conclusion, resolving that John Connor’s fate comes only after the machines wipe out billions from dropping atomic bombs galore. If only everything that came before this ending had the same awful, dreary tone, the film might have harbored the drama necessary to match Cameron’s entries. Mostow resolves to standardize his action and narrative alike, but now that we’re on the third time around, the standard blueprint can’t sustain itself and the story has clearly tapped its possibility. It’s time for something new. Cameron realized that, which is probably why he passed on directing duties. Why didn’t Mostow?