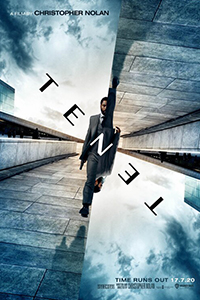 After the third or fourth line in Tenet warning, “Don’t try to understand it” and “You fight for a cause you barely understand,” the viewer gets the sense that writer-director Christopher Nolan wants to circumvent any confusion over his Byzantine plotting. Perhaps he wants his audience to feel their way through his combination of elaborate action sequences and mindbending temporal jargon, similar to how, in Interstellar (2014), love itself becomes a scientific force like magnetism that pulls a character through time and space. However, Nolan doesn’t give us much to feel in Tenet. His characters have no backstories or strong personalities to speak of; his hero, played by the charismatic BlacKkKlansman (2018) star John David Washington, is simply called Protagonist. With his signature gamesmanship intact, Nolan, today’s premier narrative puzzle maker, endeavors to achieve something loftier than his time-centric escapades in Memento (2000) and Inception (2010). But his cerebral rules are more ambitious yet less clear in Tenet, and there aren’t compelling characters around to distract us from the filmmaker’s missteps. Still, against the plot’s inadequate dramatics and head-spinning logic, Nolan conceives several memorable sights to enthrall the purely visual viewer.

Every Nolan film after Insomnia (2002) has been some kind of event. He’s a unique filmmaker in that sense; somehow, he’s at once popular, commercially successful, and consistent in his desire to make innovations in story, craft, and structure. Tenet is no exception. It was bound to be one of the biggest box-office successes of summer 2020, and then COVID-19 struck, causing Warner Bros. to delay the original July release date for weeks at a time until September in hopes of waiting out the pandemic. All the while, Nolan insisted on getting the film out for theatrical distribution. In time, it became the first major blockbuster released under reduced theatrical capacities. But given the escalated marketing and distribution costs, Nolan’s reported $200 million budget required about double that to earn a profit, and the eventual worldwide grosses of more than $360 million, mostly from markets outside of the U.S., no doubt seemed like a disappointment—the first significant one of Nolan’s career. Critically, Tenet is the filmmaker’s lowest-scored title on RottenTomatoes. Some industry experts even attribute Warner Bros.’s decision to debut their entire 2021 slate on HBOMax the same day as the theatrical release to Tenet’s perceived failure. As other studios begin to follow similar digital distribution models, commentators have linked Nolan’s film to the inevitable decline of movie theaters—a dramatic line of reasoning, to be sure.

For someone who skipped an ill-advised trip to the moviehouse in the middle of a global pandemic, these extratextual factors were unavoidable, but ultimately, they have nothing to do with the resulting film, which I watched on Blu-ray with some excitement. Certainly, there’s a difference between the theatrical experience and at-home viewing—not the least of which is how Nolan and cinematographer Hoyte van Hoytema combine scenes shot on 35mm and 70mm. This means, depending on the scene, the aspect ratio shifts between the panoramic 2.40:1 and IMAX’s more immersive standard 1.43:1, causing distracting shifts in screen size throughout (a typical quibble about watching Nolan’s films on home video). Nevertheless, the presentation was sharp, the action loud and eye-popping, and the story instantly intriguing. Tenet contains everything one expects from Nolan’s recent output: large-scale spectacle, high-speed chases, hand-to-hand combat, and big-name stars. But more than any other filmmaker working today, Nolan concentrates on a labyrinthine story structure informed by a playful use of time, whether it’s how time moves faster within dreams in Inception or the clockwork hour-day-week structure of Dunkirk (2017). 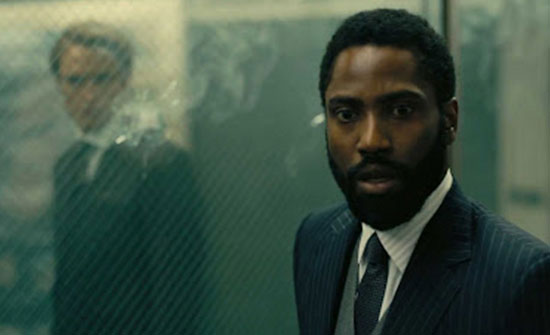 Tenet piles one temporal paradox atop another with its central device, a radiation that causes an object or person to “invert” and travel backward in time. Nolan introduces the idea with a bullet that reverses course and appears to be sucked back into a gun—a visual queue as stunning as the first appearance of bullet-time in The Matrix (1999). As various characters (played by Martin Donovan, Clémence Poésy, etc.) explain to the Protagonist in expository scenes, people from the future have a beef with the past and have created an inversion machine to wage war on their history. What begins with a neat image of a reverse bullet gives way to fights between forward-moving and reverse-moving combatants. Nolan continues to elevate the stakes as his two-and-a-half-hour extravaganza carries on, upping the ante with a highway chase that features a car in reverse. At about the midway point, events from the first half are revisited by inverted characters, creating a palindrome plot whose cleverness is to be admired. But it’s debatable whether, after a single viewing, the viewer will have a clear understanding of exactly how each party in the film’s climactic battle—between several opposing groups, each operating on a different clock—relates to each other. Diagrams may prove necessary.

Although some critics have described Nolan as a cold director whose characters lack emotion, this flaw does not rob his films of value—plenty of directors, including Nolan’s beloved Stanley Kubrick, focus more on technique and theme than story or character. Human feelings do, however, tend to feel like an afterthought in his story mechanics. This quality of his work becomes achingly apparent in and detrimental to Tenet. In some cases, Nolan doesn’t even bother to name his characters—his actors portray concepts such as Protagonist, Antagonist, and the Future. Washington plays a CIA agent who begins working with a clandestine time-crimes outfit called Tenet, and the part relies on his naturally appealing screen presence, as opposed to notes of charisma or charm in Nolan’s script. Robert Pattinson plays Neil, a cohort armed with the occasional quip or comical expression of exasperation. The only emotional beat comes from Elizabeth Debicki’s Kat, who is desperate to protect her child from her criminal husband, Andrei Sator (Kenneth Branagh, intimidating). Clearly, Nolan has engineered the only major woman character into a mother, and later a pawn in the proceedings, to play with our sympathies. It’s a largely ineffective ploy and not much of a role for the Widows (2018) star.

Ever drawing from Michael Mann heist films such as Thief (1981) and Heat (1995), Nolan weaves an intricate plot involving the threat of “something worse” than World War III. To prevent disaster, the characters make elaborate plans to steal a MacGuffin, which requires them to steal yet another MacGuffin, leading to the biggest MacGuffin heist of them all. The details aren’t critical; although, Nolan restrains himself from using anything so nondescript as James Cameron’s “Unobtainium” from Avatar (2009). His characters talk in cryptic language, poorly mixed, making the dialogue barely audible at times, and give vague descriptions of what’s going down and why. Somehow, we figure out that the second half of the film takes place in the first half, that our heroes were actually fighting themselves, but now our sympathy changes because our perspective changes. It’s all arranged inside a conundrum of narrative form that leads to a frustrating paradox—and one of those moments where a character warns, “Don’t try to understand it.” 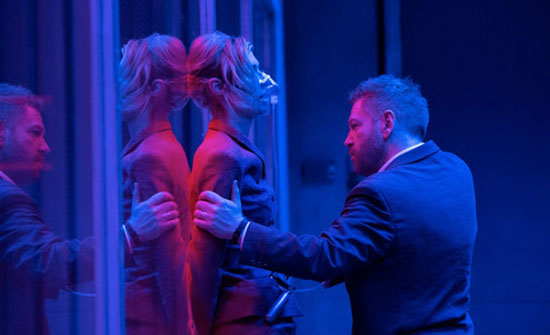 Even so, Nolan manages some wowing action sequences that immerse the viewer in the moment. One of the many heists requires the Protagonist’s fixer, played by an underused Himesh Patel (Yesterday), to crash a real 747 into an airport hanger—a stunt that avoids CGI and impresses with its realness and sheer size. Deep down, Nolan wants to make broad James Bond movies, evidenced by his interest in convoluted spy scenarios and shoot-em-up action. His characters even speak in such superhero terms (“We’re the people saving the world from what might’ve been.”). What makes Nolan’s films of interest is how they explore uncommon imagery. When the Protagonist eventually becomes inverted, he seems to exist in a Twin Peaks dream, traveling forward through a world set on reverse—making for a disorienting, but no less fascinating, visual incongruity. Nolan usually excels at creating iconic or at least massive action sequences, and the ambitious finale could have been impressive but proves borderline unintelligible. Multiple parties travel in various directions through time, each identified with a different armband or outfit, but Nolan and editor Jennifer Lame create confusion in the scene’s geography. We only get a general sense of who’s who and what they’re trying to achieve, making the whole sequence feel like organized chaos. At least it all looks sharp, thanks to van Hoytema.

Although I could probably write out a diagram of what happens (and when) if I had to, the film’s lack of dramatics failed to implant a desire to understand the temporal structure. The emotional stakes in Inception or similar cinematic riddles like The Terminator (1984) and Looper (2011) give the viewer motivation to solve the puzzle. In Tenet, Washington, Pattinson, and Debicki’s characters have so little significance that they feel like nondescript pieces on a chessboard, playing against alternate versions of themselves on the other side. They talk about nothing but the task at hand, using spy lingo and brief, one-sentence explanations of complex concepts, which are not always supported by the film’s visual presentation. It’s this quality that makes Tenet the first Nolan film to leave me agreeing with his longtime detractors. Some critics regularly declare that his films are emotionally hollow, technically sloppy, and dramatically uninvolving. They argue his characters have no personalities and his action scenes have no spatial cohesion. In every case before his latest feature, I would disagree. Here, it’s an unfortunate exception.

In an interview for the publication of Inception’s script, Nolan told his brother Johnathan, “I give a film a lot of credit for trying to do something fresh—even if it doesn’t work. You appreciate the effort to a degree.” That sums up how I feel about Tenet. It’s an admirable effort, even if it doesn’t work. Each of the film’s qualities discussed in this review—Nolan’s playfulness with narrative structure, his elaborate action sequences, his interest in time as a way of layering plot—have been explored in other, better Nolan endeavors. Films like Memento, Inception, Interstellar, and Dunkirk show that Nolan can manipulate time and narrative with precision, implanting equal interest not only in the plot’s conceit but its arrangement. Tenet feels unfocused by comparison, full of visual disparities and messy cutting that contains faulty shot-to-shot logic—mistakes which are disastrous for such an ambitious, carefully regimented series of events moving forward and backward through time. Whatever its formal flaws, Tenet suffers most from its absence of feeling and thinly described characters, leaving Nolan’s cinematic puzzle box a contraption with nothing inside for those who attempt to solve it.