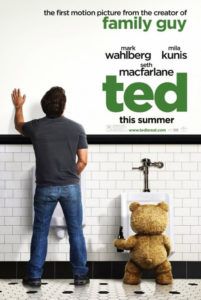 Seth MacFarlane’s debut feature Ted manages to be everything you would expect from the creator of the all-offensive, crude-humored animated sitcoms Family Guy and American Dad!, starting with the premise, which was actually developed for a cartoon series. On one fateful Christmas morning in 1985, an unpopular Boston kid named John Bennett makes a wish that his new toy, a stuffed teddy bear, would come alive and be his best friend forever. A shooting star later, little John has his wish; the next morning, his toy is a walking-talking creature who achieves his own 15 minutes of fame as word of his sudden consciousness gets out, including a guest appearance on The Tonight Show with Johnny Carson. But then a couple of decades pass, and Ted’s mild celebrity fades. And in the tradition of Brian the dog, Roger the alien, and Klaus the fish, Ted (voice of MacFarlane) remains the unlikely best friend of the now-35-year-old John (Mark Wahlberg).

MacFarlane’s signature brand of humor saturates the material, which follows John as his girlfriend, Lori (Mila Kunis), grows tired of her boyfriend constantly smoking pot and partying with his childhood friend. Theirs is a bromance of the highest order—except one of the bros is, you know, a teddy bear whose fur has become matted and worn with age. The problem is John has never grown up since he ostensibly never grew out of playing with toys. Although, this toy is an enabler, swears like a sailor, and dates trashy women, so he’s not exactly childlike. Nevertheless, when it’s storming out, John still needs his “thunder buddy” to comfort him. Lori thinks John isn’t taking their relationship seriously as a result, and in order for them to move forward, Ted may have to go. Meanwhile, Lori’s smarmy boss (Joel McHale) tries to orchestrate Lori and John’s breakup so he can have her all to himself.

So what else about the movie, besides a talking animal character, is like MacFarlane’s television work? It wouldn’t be a MacFarlane production if there weren’t tangential humor. Indeed, there is no end of random 1980s pop-culture references here, including an ongoing one about Sam Jones and his titular role in the 1980 cult hit Flash Gordon. (The best running joke belongs to Tom Skerritt, however, punctuated by a single line of dialogue.) Earlier in the story, John recalls how he and Lori met, and we snap into a Saturday Night Fever by way of Airplane! reference. The movie makes several nods to much George Lucas fare, Diff’rent Strokes, and a dozen other ‘80s properties. There’s a fight almost on par with those constant battles between Peter Griffin and the Chicken. Patrick Warburton and Alex Borstein make appearances, along with a number of other cameos, like the hilarious bits with Ryan Reynolds and Norah Jones. And Patrick Stewart provides narration, forcing me to once again ask a question American Dad! has often prompted me to ask of the MacFarlane-Stewart partnership: How the hell does MacFarlane convince a thespian like Stewart to say this bonkers stuff?

Most of the best scenes involve banter between the CGI animated bear and Wahlberg, who never once looks like he’s acting across from a character added in post-production. MacFarlane’s voice work for the bear, in a deep Bostonian accent, sounds suspiciously like a certain Quahog resident, but that’s acknowledged by Ted himself. The real standout is Wahlberg, who, also using his natural brogue, does his best comedy work making light of his normal tough guy persona. At one point, Wahlberg hides behind a column and screams like a girl as Kunis’ character picks something icky off the floor—a person just can’t help but laugh at such a sight. Wahlberg’s John is just such a silly, absurd, un-macho character that seeing him in the role is a delight. Given that he’s usually a one-note meathead shooting guns and puffing out his chest, watching him perform against type is a constant joy.

MacFarlane and company provide a rare, constant stream of laughs, even despite the third act’s very disturbing segue (when MacFarlane goes dark, it’s very dark), featuring a hysterically creepy Giovanni Ribisi as a weirdo who wants Ted for his equally weird teenage son. Shot on location in Boston, complete with a climax set in Fenway Park, all of Ted will feel familiar to audiences versed in MacFarlane’s usual methods, but none of it means it’s a comedy without structure or an emotional payoff. Along with MacFarlane, longtime Family Guy writers Alec Sulkin and Wellesley Wild create an effective love triangle of sorts involving John, Ted, and Lori, one we’re saddened to see break up and one we’re happy to inevitably see put back together again. Just like the aforementioned talking dog, Ted becomes a character that’s more than just a plot device or source of vulgar humor; he’s one of those oddly real characters brought to life by subtle and effective special FX. The movie is a solid first feature from the writer-director, to be enjoyed by R-rated comedy-goers and perhaps even loved by MacFarlane’s more devoted fanbase.