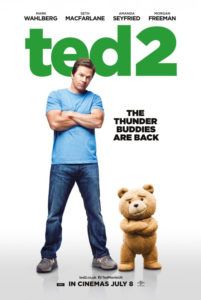 Plot has never been Seth MacFarlane’s strong suit. From his various irreverent animated series (Family Guy, American Dad, and The Cleveland Show) to his uneven filmic efforts, MacFarlane’s comedy relies on pop-culture references, shock humor, and random cutaways—not the kind of humor that lasts beyond the moment. Somehow his 2012 hit Ted transcended those limitations by managing to be at once funny and kind of sweet. The same cannot be said for his abysmal A Million Ways to Die in the West from 2014, a comic misfire of incredible proportions. For his third directorial effort, MacFarlane delivers his first sequel, Ted 2, a comedy whose story is a formula-wrapped cliché served on a bed of lazy writing and celebrity cameos. MacFarlane and co-writers Alec Sulkin and Wellesley Wild deliver a number of hilarious, nonsensical movie references for those familiar, but their offensive humor grows tiring and their narrative couldn’t be more contrived.

The story picks up a few years after the original, complete with bookend narration by Patrick Stewart (just one of many Star Trek alumni to make an appearance). The talking teddy bear Ted (voiced by MacFarlane), having been magically brought to life thirty-some years ago by his best friend John (Mark Wahlberg), now stands on the marriage altar next to his fellow grocery store co-worker, the not-so-classy Tami-Lynn (Jessica Barth). Since the first one, John’s divorce from Mila Kunis’ non-present character has left him downtrodden. He takes some solace from Ted’s announcement that he and Tami-Lynn want to have a baby. When Ted and John’s harebrained scheme to obtain Tom Brady’s sperm fails, and Tami-Lynn proves infertile anyway, they try adoption. But the adoption agent (Nana Visitor, from Star Trek: Deep Space Nine) warns them that the government may begin looking at Ted’s status as a non-person—and sure enough, Ted’s legal status is soon revoked. As a result, he’s fired from his job, his credit cards are canceled, and his marriage is forcibly annulled.

Ted and John resolve to hire an attorney, but they can’t afford anyone except a pot-smoking young novice, Samantha (Amanda Seyfried, who’s quite hilariously, and accurately, compared to Gollum throughout). There’s a court case with all the usual courtroom moments, then an appeal with yet another court sequence featuring the country’s premier civil rights lawyer (Morgan Freeman). Meanwhile, John and Samantha form a predictable romance, and Ted’s stalker Donny (Giovanni Ribisi) concocts another evil plan. Nothing that happens offers many surprises, and the only thing keeping us involved is a series of funny asides. Although some of these gags feel obligatory, seeing Patrick Warburton and Michael Dorn dress up as their former counterparts, The Tick and Worf, respectively, and then bully attendees of the New York Comic-Con, was funny stuff. Or take the scene where Liam Neeson hesitates buying a box of Trix, because he’s convinced he’ll be arrested for buying the cereal that’s “for kids”. Also, former Flash Gordon star Sam Jones makes another appearance, beating the dead horse.

Nevertheless, after considering how unnecessary and formulaic the whole thing is, you’re left with the humor itself. I laughed out loud a handful of times; however, the majority of jokes fell flat and felt painfully unfunny. Plenty of unapologetically homophobic remarks are unfortunate and especially ill-timed, given the recent Supreme Court ruling that same-sex marriages are now legal in all 50 states. And with rising race tensions in the U.S. today, making light of slavery, the miniseries Roots, and African American stereotypes also seem like poor choices. But then, MacFarlane has always been an equal opportunity offender. And he’s never met a joke he only wanted to tell once. Repetition can be funny in small doses, but when he’s repeating the same few jokes from start to finish, you begin to realize he managed to extend the runtime to an overlong 115 minutes by using the same handful of punchlines over and over.

The few solid laughs in Ted 2 involve movie references and random celebrity appearances; very rarely do the situations themselves provide a laugh. But a couple of the referential moments are priceless. The Busby Berkeley-inspired title sequence put a smile on my face. Seeing Ted drive a car and play air piano to Ray Charles, in the same way, John Candy did in Planes, Trains, and Automobiles, was a lark. A Jurassic Park nod, where dinosaurs are replaced by a field of cannabis, also earned a laugh. Elsewhere, a gag-inducing sequence in a sperm bank was the lowest form of gross-out humor and seemed more attuned to Farrelly Brothers fare. In any case, John and Ted’s bromantic “thunder buddy” antics just don’t have the same charm they once did; now the two of them just seem like abrasive, intolerant jerks. (Moreover, Ted looks like he’s in desperate need of a bath, his fur matted and filthy.) Some may find the material serviceable, but Ted 2 further proves that sequels rarely ever stand up to their originals.